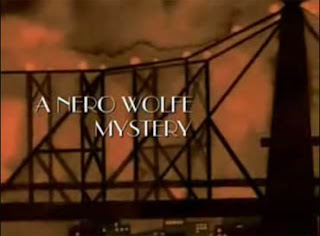 I love the opening credits for A Nero Wolfe Mystery (2001-02).  They're different every episode, with snazzy animation and music to fit that ep's theme.  Here are a couple examples:

They set the tone so nicely for the feel of the whole series, as well as cluing you in to what the particular ep will involve.  While the Nero Wolfe books by Rex Stout span several decades, the series is set solidly in the 1950s, which is brilliant because it lets them give the series a distinctive, retro feel with fun costumes, cars, and furnishings.  And opening credits.

I love this series -- Cowboy has given me both seasons, and they're completely awesome.  Maury Chaykin makes a superb Nero Wolfe, and Timothy Hutton seems to have been born to play Archie Goodwin.  Hutton also directed and produced several eps.  And the rest of the cast rocks too, including the ensemble players.  Regular characters like Inspector Cramer, Fritz Brenner, and Saul Panzer are always played by the same actors, but the only-in-this-story characters get played by a pretty consistent set of actors, rather like a local playhouse's acting troupe.  Seeing the same faces in different roles felt a bit disconcerting to me at first, but once I got into the groove of the idea, it was fun to see who would pop up in what role next.
Posted by Hamlette (Rachel) at 5:58 PM