Time for some lists. Haven't done any of those lately, have I? These are prompted by a discussion on Cowboy's family's chatboard site.

First, here are what I believe are the very
Best Westerns
(not necessarily in any particular order)

The Magnificent Seven
The Searchers
Silverado
Rio Bravo
The Ox-Bow Incident
The Man Who Shot Liberty Valance
Shane
The Good, The Bad, and the Ugly
3:10 to Yuma
Stagecoach
Winchester '73
High Noon

Those are all movies that practically transcend the Western genre, actually. They're not just good Westerns, they're good movies overall.

Here, on the other hand, are
My Favorite Westerns
(in a very particular order) 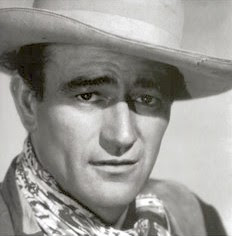 They have a big display at work of his movies on dvd. Some of them are new special editions of movies that have been out for years that cost about as much as a new release. But most of them are $7.50, and a bunch of those are lesser-known/hard to find movies like Trouble Along the Way and Without Reservations. I was a very restrained Hamlette and only bought five ;-)

I know what I'm going to be doing on my days off this week!

Posted by Rachel Kovaciny at 10:34 PM No comments:

I had my ultrasound this morning, and it looks like Gumdrop is a boy! Hooray! Not that girls aren't nice too, but I really think I'm better suited to mothering a boy. Guess we'll find out, huh?

Here are a couple pics, one of me last week (20 weeks pregnant) and also the ultrasound pic they sent home with me. 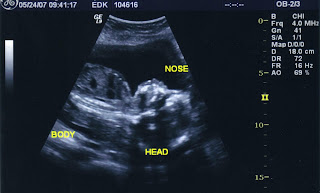 I had supper with N and V from jury duty tonight. Hard to believe that's two years ago already! It was cool to see them and get caught up on each other's lives, etc. Too bad we can never all seem to get together more than once a year.

Now I'm supposed to be packing for our trip to MN for Johnnycake and Dimples' wedding. Instead I'm procrastinating and messing about on the internet :-D
Posted by Rachel Kovaciny at 12:10 AM No comments:

I'm listening to lots of his music today, as you might imagine, and plan to watch at least one of his movies tomorrow night when I'm off from work.

But all the same, I'm kind of sad today. Bobby would only be 71 -- that's not even remotely old! How completely tragic that such a talented artist should die at the age of 37. He could still be recording today -- look at how long Johnny Cash kept recording! Sigh. Of course, when he was a kid, doctors told his parents he wouldn't live to be ten, so I guess it's pretty amazing he made it to 37. But still, sad. 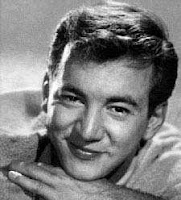 Posted by Rachel Kovaciny at 11:03 PM No comments:

At long last, the time has come to unveil Hamlette's Warhead Movie Rating system! I've only planned to blog about this for like four months, but never had time to set it up. Well, here goes:

I rate movies that I see in the theater according to how many Warheads I consume during it. The more times I reach into my pocket for a sour pick-me-up, the worse the movie is. So in this rating system, the fewer Warheads a movie receives, the better. I put one Warhead into my mouth when the lights dim after the trailers, and if I never think about getting another one, it's a very gripping, well-executed movie. If I get one more, well, then it's a pretty good movie, but probably a little slow getting started. And if I unwrap a third Warhead, the movie probably wasn't worth me dropping $7.75 to see in the theater.

There are five flavors of Warheads, so theoretically a movie could receive a low score of five, but that would mean the movie was so terrible that the only way I could stay awake was by blistering my tongue.

The only problem with this system is that it doesn't say anything about how well I liked the movie, just about how much it sucked me in. For instance, I didn't really like The Prestige, but I only had one Warhead during it, because it really pulled me in and absorbed me. So it would get a really high Warhead Rating, even though I didn't like it. On the other hand, I liked Spider-man 3 okay, but it started slowly, so gets a Warhead Rating of 2 -- which works, since I wasn't nuts about it but didn't hate it.

Today is Rudolph Valentino's 112th birthday! Here are some links to help you celebrate:

A Slideshow Tribute -- mostly photos, with some movie clips, all set to perfect music (7 min)

Posted by Rachel Kovaciny at 9:43 PM No comments: