"Jane and the Man of the Cloth" by Stephanie Barron 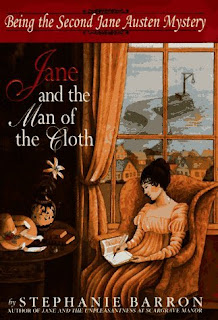 At first, I was afraid I would be disappointed by this book.  For the first few chapters, it felt like the plot was too obvious -- clearly, the brusque, roguish Mr. Sidmouth was the smuggler everyone was talking about.  Then the plot seemed like it was going to follow a bit of Pride and Prejudice, with Captain Fielding playing Wickham to Mr. Sidmouth's Darcy.

But then, about 5 or 6 chapters in, all of that was clearly not the point at all anymore, and I got sucked in.  A Byronic hero, a bit of swash and buckle, and a plot so tangled I never did figure it out before I was supposed to -- I loved it!  Much more so than its predecessor, Jane and the Unpleasantness at Scargrave Manor. That was fun, but this is delightful.

This fictional Jane Austen is presented as a resourceful, bold, and spirited woman of twenty-nine.  I should like to be friends with her, very much.  There are many footnotes that bring in things from the real Jane Austen's letters or the society she lived in, which makes this book sound dull (footnotes being the thing of college research papers, after all), but it's anything but dull.  Even if the main character wasn't supposed to be Jane Austen, I would still have enjoyed this book.

EDIT:  I forgot to add my favorite parts!  Here they be:

And so I cross the room to peer out at the unknown, stretching before me like all the days I have yet to live; and can discern nothing beyond my own wavering reflection in the window's glass.

The day broke quite stormy, as though all the seacoast mourned the Captain's passing; and the inmates if Wings cottage lay abed, hugging their dreams close against the rawness of the day.

Full many a midnight thought I have entertained with alacrity, only to reject it over my breakfast chocolate as excessively disordered.
Posted by Hamlette (Rachel) at 10:06 PM No comments:

The Edge of the Precipice

Now that you've finished rolling your eyes, I'll remind you that I mentioned earlier this year that I'd like to have a blog where I could collect all my book reviews.  I just couldn't think of a blog name I really liked that wasn't already taken.  I really wanted to call it "Words, Words, Words," after a line in Hamlet, but that -- and every variation I could think of -- was taken.

But I've thought of a blog title I love!  The Edge of the Precipice.  It's from an F. Scott Fitzgerald quotation:  "Draw your chair up close to the edge of the precipice and I'll tell you a story."  I've loved that quotation for years, and it suddenly popped into my head the other day as being a great name for my book review blog.  I hastened to my computer, and sure enough, it was still available, so I nabbed it. 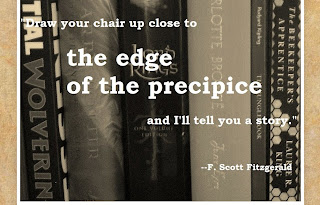 Anyway, I'm actually re-posting all my book reviews from the past 8 years on that blog.  All the ones from this blog and my other two blogs.  Every single one.  Which is going to take me a while, but once I'm done, I'll start posting my new reviews there too.  I'll try to finish reviewing Jane Austen's novels here, just for completeness, but those will get posted over there too.  And eventually, all my book reviews will go there.  So go follow that blog if you want to keep reading those.

But I'm not closing down this blog, I promise.
Posted by Hamlette (Rachel) at 5:12 PM 2 comments:

Let me begin by admitting that Emma is not my favorite Austen book.  I think it makes me laugh just as much as Pride and Prejudice, if not more.  And Mr. Knightley is my second-favorite Austen hero, after P&P's Mr. Darcy.  But I don't like Emma Woodhouse very well.  And since I have to want to be friends with most of a the characters in a book (or movie, or TV show), this is the main reason I don't like Emma all that well.

Why don't I like Emma Woodhouse?  Partly because she is vain and arrogant, as she herself admits toward the end:  "With insufferable vanity had she believed herself in the secret of every body's feelings; with unpardonable arrogance proposed to arrange everybody's destiny."

But I think mostly I can't like her very well because she is so meddlesome.  If only Emma had left well enough alone, Harriet would have married Robert Martin when he proposed by letter.  And then, of course, the rest of the book wouldn't exist, but still.  She's also quite bossy, and I dislike bossy people.  Probably because I'm kind of bossy myself, or I can be, but it's something I try to overcome in myself, so I guess I expect other people to struggle against their own bossiness too.  Mr. Knightley, for example, is also bossy, but he becomes less so by the end of the book. 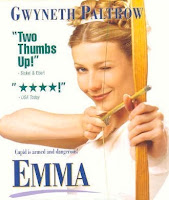 But each one of those characters are somehow a bit more likable in the movie than in the book.  Emma has an uncertainty about her that keeps her for being quite so demanding.  Harriet has a look of intelligence that balances out her docile obedience to everything Emma says.  Mr. Elton... okay, he's not, he's still an ingratiating fortune-hunter.  Neither is Mr. Knightley, but only because he can't possibly be more likable, hee.  But Frank Churchill comes off as mischievous more than simply cheerful and heedless, which makes me like him better (despite Ewan MacGregor's terrible wig.  I swear it is actually pink cotton candy!)  I think the only character I like better in the book than the movie is Miss Bates (Sophie Thompson), who is more intelligent and less pathetic in the book.

So anyway, I like Emma better than Mansfield Park, but mostly because of Mr. Knightley and the movie version.

If you're not up on your Austen, this is the one where Miss Emma Woodhouse plays matchmaker for her friend Harriet Smith, with disastrous results.
Posted by Hamlette (Rachel) at 4:59 PM 2 comments: