Love Actually (2003).  Far too many naughty bits for me to ever own it, but I tend to get it from the library every December.  It's kind of a romantic comedy version of Crash (2004), though I guess since that came out a year later, maybe Crash is the dramatic version of Love Actually.  Anyway, it's a series of interconnected vignettes about all kinds of disparate Londoners who each have some kind of love problem in their lives.  I love how deeply some of them delve in just ten or twenty minutes, sprinkled here and there amid other story lines.

My favorite characters are the widower Daniel (Liam Neeson) and his stepson Sam (Thomas Sangster) -- Daniel is grieving over the wife he buries at the beginning of the film, and Sam is grieving too, but he's also falling in love with a fellow grade-schooler. 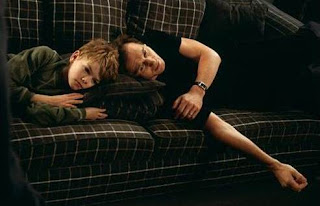 Neeson and Sangster have a great chemistry as two people finding their way into the new roles they have in each others' lives now that the one person who tied them together is gone.  Every scene of theirs is a delight. 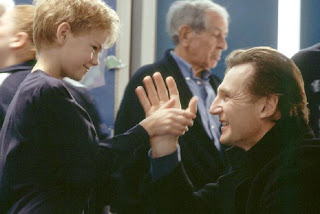 My other favorite couple is The Prime Minister (Hugh Grant) and Natalie (Martine McCutcheon).  The bit where he ends up caroling to strangers on Christmas Eve always cracks me up, especially when his driver joins in with a surprising singing voice. 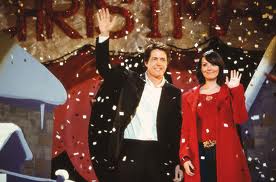 I'm also quite fond of John (Martin Freeman) and Just Judy (Joanna Page).  I can't wait to see Freeman as the new Bilbo Baggins in The Hobbit! 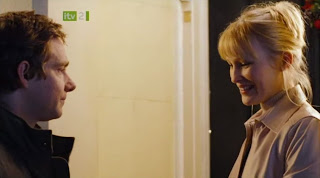 Of course, this movie is loaded with famous people, like Emma Thompson, Keira Knightly, Colin Firth, Alan Rickman, and oodles more.  It's a great blend of humor and pathos, and makes me alternately cry and laugh every time I watch it, sometimes both in the same scene.  Plus, it's Christmasy!
Posted by Hamlette (Rachel) at 10:42 AM 4 comments:

Day 12 - A film that changed your opinion about something

Hmm.  There are certain movies that I term "important" movies because they really tried to send a message to the viewers of their times.  The three that come to mind at the moment are Gentleman's Agreement (1947), Rebel Without a Cause (1955), and Guess Who's Coming to Dinner (1967).  But I can't say those changed my mind about anything, as I was already anti-anti-Semitism, convinced parents need to be involved in their kids' lives, and unopposed to mixed-race marriage.

So I guess I'll go with a movie that changed my mind about an actor:  Meet Joe Black (1998).  I mentioned this briefly once before, but all through my high school years, I couldn't stand Brad Pitt.  A couple of my friends were gaga over him in the silliest ways imaginable, and since their previous movie star crushes did not attract or interest me at all, I figured he must be all beefcake and no brain.  I refused to watch any of his movies.  I derided him as a no-talent pretty boy. 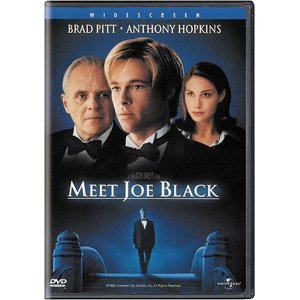 But then, during I think my sophomore year of college, some friends convinced me to see Meet Joe Black.  And, to my great surprise, Brad Pitt can act!  And act well, when he wants to.  He's also quite attractive, in a Robert Redford sort of way.  Not that he'll ever top my list of Hottest Movie Stars or anything, but he's fun to watch. 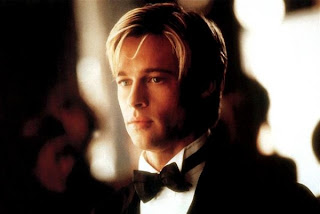 And this movie... it's so nifty!  It's kind of a remake of Death Takes a Holiday (1934), which I've yet to see, though I'd like to 'cuz it stars Frederic March as Death.  So, yeah, this is a movie about Death.  Death decides to see what it's like to be a mortal, so he takes over the body of a young man (who just happens to look exactly like Brad Pitt, good choice), calls himself Joe Black, and tells the next person who was supposed to die that he'll grant him a few extra days if he'll show Death what life is all about.  That person is Bill Parrish, played by the incomparable Anthony Hopkins.  The scenes between Hopkins and Pitt are my favorites, they have a great chemistry, all about antagonism, fear, and curiousity. 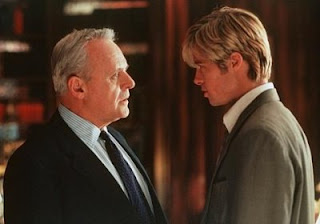 Meanwhile, of course, Bill Parrish's daughter Susan (Claire Forlani) falls for Joe Black and teaches him more about life than he'd bargained for. 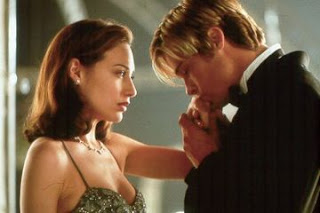 But the scene that really clinched my change-of-mind about Brad Pitt is the one where Joe Black speaks Creole to an elderly woman who recognizes him for who he really is.  Pitt is amazing there, and the sound of that patois rolling off his tongue is magical. 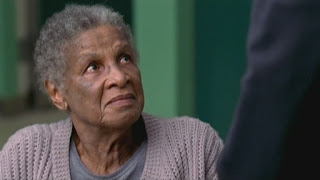 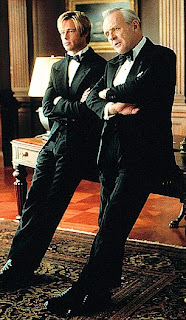 It's a beautiful film, with gorgeous sets and costumes, not to mention all the pretty people.  And it has some of my favorite quotes -- I can never hear the phrase "death and taxes" without thinking about this movie.  And I love what Bill Parrish says at his birthday party at the end of the movie -- "Sixty-five years... don't they go by in a blink."  I hope I remember to use that line at my own 65th birthday.

The ending always makes me cry, both sad and happy tears.  It's a good one.
Posted by Hamlette (Rachel) at 4:09 PM 2 comments:

According to this list I did six years ago, my most-hated movie of all time is The Texas Chainsaw Massacre.  The original.  It's horrible.  I don't even want to think about it.  I can't believe I got talked into watching it, and I wish there was a way to wash images from it out of my mind.  Disgusting.  Avoid at all costs.
Posted by Hamlette (Rachel) at 8:32 PM 2 comments:

I guess this is supposed to be the prompt that gets modern moviegoers to admit they like some really old movie.  So, fine, here is the absolute oldest movie that I love and adore:  The Sheik (1921). 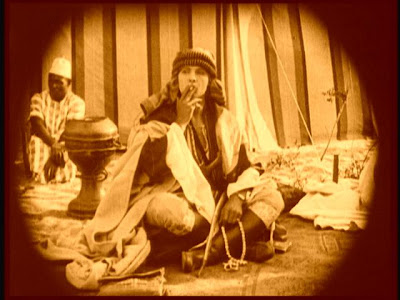 I mentioned here how, as a teen, I developed a disdain for Rudolph Valentino, then later fell head over heels for him once I actually saw him in a movie.  That movie was The Sheik.  It's the movie that rocketed him to megastardom, making him the first true matinee idol.  And if you watch it, it's not hard to see why.  He's mysterious, handsome, and ruthless, but also tender.  Not to mention, he looks great on a horse! 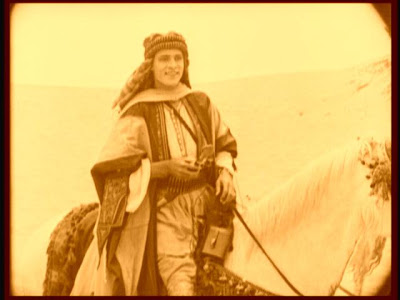 The plot?  It's the stuff fluffy, romantic daydreams are made of :-)  Headstrong, independent Lady Diana Mayo (Agnes Ayres) gets captured by Sheik Ahmed ben Hassan (Rudolph Valentino), who imprisons her in his lavish tent in the middle of nowhere, refusing to let her leave until she has, er, submitted to him.  Of course, she refuses -- she hates him, she loathes him, she despises him... 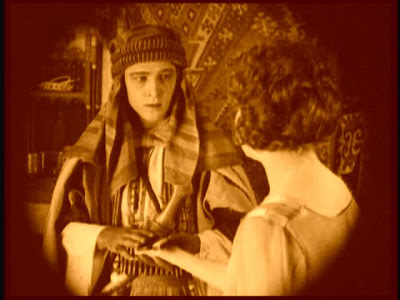 And then she gets captured by a reeeeeeally horrible rival of Ahmed's.  He's not going to do any of this waiting around nonsense like Ahmed.  Of course, by this point Ahmed and Diana are in loooove, though they won't admit it.  So Ahmed rescues Diana, though he gets bonked on the head in the process. 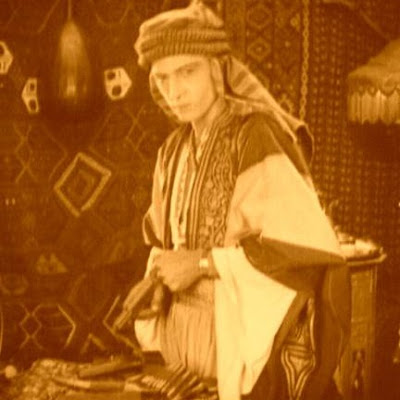 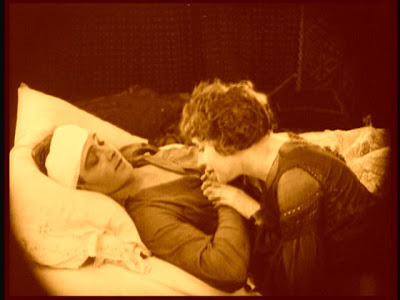 You can watch The Sheik here for free, and supposedly it's not chopped into segments like it would be on YouTube.  It's part of something called The Video Cellar Collection, oodles of old movies and TV show episodes that are now in the public domain -- go here for a list of what they have. 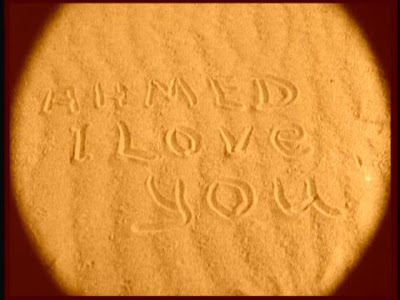