We got a couple inches of snow here today, so Cowboy and I are spending a quiet New Year's Eve at home, playing with Dano and drinking hot Dr. Pepper with lemons. So I raise my mug to you and wish you a wonderful new year full of health and happiness. L'chaim!
Posted by Hamlette (Rachel) at 8:23 PM 2 comments:

Email ThisBlogThis!Share to TwitterShare to FacebookShare to Pinterest
Labels: holidays

When I was three or four, I loved "The Night Before Christmas." I made my parents read it to me over and over and over -- I had it in this wonderful extra-big book with amazing pictures. They read it to me so often, I memorized it. The whole thing. Word for word. My parents used to get me to recite it for their friends -- it was my first party trick. I still remember the first couple stanzas, though I won't recite them for you here. I'll just give you the very end, with my warmest compliments of the season:

"Merry Christmas to all, and to all a good night!"
Posted by Hamlette (Rachel) at 9:14 AM 1 comment:

Email ThisBlogThis!Share to TwitterShare to FacebookShare to Pinterest
Labels: Christmas

We have snow! Lots and lots of snow! More than nine inches, and more heading our way :-D Woo! I've done about 19 Dances of Joy, as you can imagine. And you should see Dano playing in the snow! He's practiced walking in his new boots since that first snowfall a couple weeks ago, so now he can run about like a tiny mutant snowman. He spent this morning picking up chunks of snow, helping Cowboy brush off the car, and scaling the new snow mountains along the edges of our parking lot. We'll proably do it all again tomorrow. And as soon as there's good packing snow, we'll build his first snowman!

Of course, this means Mom's trip up here tomorrow might turn into an Adventure, but you need one of those every now and then, right?
Posted by Hamlette (Rachel) at 4:42 PM 1 comment:

This is the awsomest display of "dancing Christmas lights" I have seen. I like it better than the vids of Disney's that I've found. They synchronize everything perfectly, and they have different things personify different parts of the song.

Thanks to Cowboy for finding this! Dano loves it too -- he requests it about half as often as "Jingle Bells."

(Note to DKoren: it involves flashing strings of Christmas lights and parts of "The Nutcracker" played on metal instruments. You might hate it.)
Posted by Hamlette (Rachel) at 8:10 PM 1 comment: 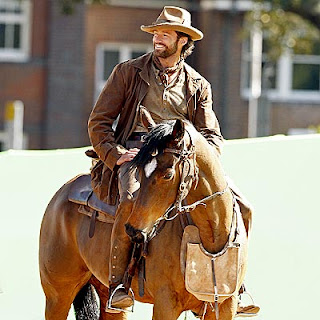 I've been trying to figure out how to write about Australia. I went to see it last night, and I loved it. Adored it. Wanted to turn around and go watch it again.

I was pretty sure I would at least like it, because it has cowboys, soldiers, horses, Hugh Jackman, Nicole Kidman, Jack Thompson, and David Wenham in it. Plus, it's set in Australia, home to my most favoriteset movie of all time, The Man from Snowy River (1982). And I really like Baz Luhrmann's storytelling abilities. Plus, Mom, Dad, Johnnycake, and Dimples all liked it.

My expectations were more than met. They were exceeded on every hand. The sweeping story of love and good vs. evil, the breathtaking panoramas, the sweeping shots of a cattle herd on the prod, the enjoyable acting... it was all grand.

And I know Hugh Jackman "learned to ride" for this movie, but holy horsemanship, Batman! The man looks like he was born in that saddle, and you could tell he did most of the riding himself. Yeowsa. The sight of him on a horse galloping full-tilt as he drives a herd of brumbies past the camera... it was almost like watching Snowy River for the first time again.

Actually, parts of it did remind me of The Man from Snowy River (the original, not the Disneyized sequel), and not just because they both have Jack Thompson in them. The loner hero who has a special way with horses, the pretty heroine who's tougher than she looks, the various characters out to prove themselves... mmm.

Oh, it gets one Warhead, if you hadn't guessed.

While writing this scattered, unfocused, effusive review, I've been looking for pix to add to this post. Three of them remind me so much of other movies, I can't help but think they're deliberate hat-tips.

This pairing makes me think Gone with the Wind! You too? 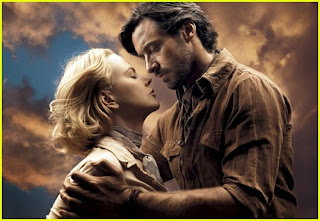 This shot of Hugh Jackman is pure Clint Eastwood from his Spaghetti Western days. I blogged before about their similarities....

And finally, this shot has to be homage to John Wayne in Hondo. It has to be. 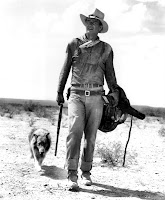 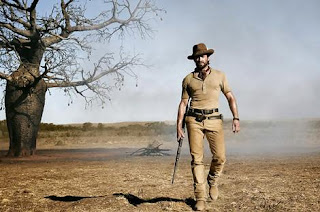 Dano has a favorite Christmas song right now: "Jingle Bells," specifically the jazzed-up Barbra Streisand version. He recognizes it as soon as it starts, and he dances to it and 'sings' "Jing, jing, jing" while it plays (which is also how he asks to hear it).

He's fourteen months old now, and has a vocabulary of nearly thirty words. A lot of them are only recognizable to us, but anyone could understand quite a few, like "daddy," "apple," and "up." And is that boy ever strong! Yesterday he grabbed a forty-two-pound dumbell and started dragging it across the floor. Not rolling it, dragging it. We're doomed.
Posted by Hamlette (Rachel) at 3:52 PM No comments: 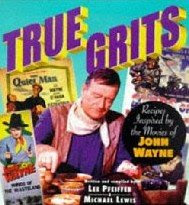 Our library had a book sale today, and I got the coolest book! True Grits: Recipes Inspired by the Movies of John Wayne by Lee Pfieffer and Michael Lewis. I swear, they wrote this book with me in mind. Not only does it have lots of recipes, but it has movie photos and trivia too. And the recipes have silly titles, like "Sandwiches of Iwo Jima," "She Wore a Jell-o Ribbon," and "The Flan Who Shot Liberty Valance." What's not to love? I'm gonna have as much fun reading this recipe book as I will trying some of the recipes.

And I swear they found shots of every time the Duke ate in a movie to put in this book -- what a fun task that must have been! The authors actually included their email addresses at the end of the book, so I will probably have to write them and tell them how much I dig this book. Maybe after I've made one or two of the recipes.
Posted by Hamlette (Rachel) at 5:12 PM 1 comment: