I watched The Remains of the Day (1993) for the first time this week. And also the last time.

My family and I adore the remake of Sabrina (1995) and have watched it a zillion times. At one point, Sabrina's chauffeur father says to another servant, "Have you been watching Remains of the Day again?" when she brings him some tea on a tray with a vase of flowers. So I've always wanted to see this movie.

And I get the Sabrina line now, because Emma Thompson's housekeeper character keeps bringing Anthony Hopkins' butler character fresh flowers. So I'm glad I saw this movie for that reason.

But what a depressing movie! It has a completely unsatisfactory ending. I know they're making a point about not speaking up for yourself, not letting your feelings show, yadda yadda yadda. But did they have to do it in such a bleak way? Sigh.

Also, I kept expecting to find out that the butler was a secret agent, that those little Chinamen figurines had microphones and recording devices in them or something. And none of that happened. So that also disappointed me.

But I'm getting fonder of Emma Thompson. In fact, at the library today I wanted to get either Howard's End or Sense and Sensibility, but neither of them were there. Grr.
Posted by Hamlette (Rachel) at 5:31 PM 2 comments:

When Dano had his 15-month checkup last week, I told the doctor he had a vocabulary of around 40 words. The doctor was suitably shocked, as babies this age normally can say 4-8 words.

But I was wrong. Today I wrote down all the words Dano says regularly, the words he not only can say, but knows what they mean. He understands many more words, and he can say a few that he's just mimicking us on and doesn't really understand, but he has a working vocabulary of about 80 words. Yes. Eighty. Eight zero.

Don't believe me? Here they are, with his pronunciation in parentheses if it differs from the ordinary:

As you can see, many of them would be understandable to strangers. And the letter 'b' is by far his favorite, the word 'bop' gets used for many different things, and he likes to pronounce his 'w' Germanically.

Yes, I'm partly bragging here. And partly preserving this word list for posterity. And partly I'm telling you just how much trouble Cowboy and I are in -- Dano may be much too smart for us!
Posted by Hamlette (Rachel) at 9:41 PM 6 comments:

Johnnycake and Dimples have been here all weekend because everyone is off work/school today. How did we celebrate? By making them work, of course. Johnnycake fixed the lid of my toy box, and Erika did dishes yesterday while Cowboy, Dano, and I napped.

Don't worry -- we have given them a bit of time off for good behavior now and then. On Saturday, we watched Melinda and Melinda (2004), a Woody Allen movie where two screenwriters, one who writes dramas and the other who writes comedies, take turns telling a story about a woman named Melinda. They use the same basic premise, that she's a divorcee who's trying to get her life together, but she comes to very different ends in the two stories. An interesting premise, and it was carried out pretty well, so I guess we can chalk it up as another Woody Allen movie that I actually liked okay (the other, so far, being Scoop).

And last night we played the new Beatles Monopoly that Mom and Dad gave Cowboy for his birthday. We stopped the game before it could descend into slumlordism and declared Cowboy the winner. I lost. Badly. I only managed to buy two properties during the whole game because I kept landing on things Johnnycake had already bought. And once in a while things other people had bought, but mostly it was Johnnycake. In fact, he and I just kept trading the same few bills back and forth for most of the game.

This morning, we all got to sleep in -- Dano and I until 6:45, Cowboy until 7:15, and Johnnycake and Dimples until nearly 10. They're packing up this morning and will leave us after lunch, alas.

Funniest part of this weekend: Dano calls both Johnnycake and Dimples "daddy." Cowboy's a bit miffed, of course, but it makes the rest of us laugh.
Posted by Hamlette (Rachel) at 9:03 AM 3 comments: 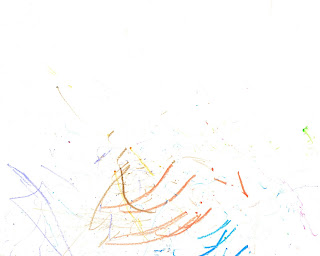 We gave Dano his very first box of crayons today! He's been playing with our pens for a while now, whenever we had any that were safe to let him use. He'd just been chewing on them or smacking things with them until this week, when he started pretending to write on bits of paper with them, so I realized he was probably ready for crayons.

Is he ever! He calls them pens (which he pronounces "behn"), and he likes to tap them on the paper more than scribble so far, as you can see.
Posted by Hamlette (Rachel) at 9:40 PM 2 comments: 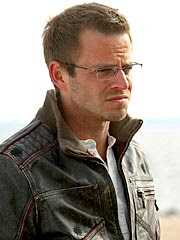 Danny has that Noo Yawk accent, it's for real, and it makes me grin every time I hear it. He doesn't quite have the Bronx growl like Vic Morrow or Bobby Darin -- that would've made him perfect. But it's a great accent nonethless, and I dig it. I'm not a big fan of NYC itself, as it's a monstrous city and I don't like cities. But that accent -- oh baby!
Posted by Hamlette (Rachel) at 5:03 PM 4 comments: