I'm actually kind of between obsessions right now.  True obsessions, I mean.  I was obsessed with Lost for over a year, but now that I've seen all six seasons, my obsession is kind of waning.  I'm still watching my current TV shows, Bones and NCIS, but neither of them is an obsession.  And I've been dedicated to Combat! long enough that it's not really an obsession anymore either, at least, not all the time ;-)
Posted by Hamlette (Rachel) at 1:34 PM No comments:

Without a doubt, classic Star Trek.  My brother and I discovered the show when I was about 13 and he was 8 or 9, and I'm not sure "obsession" is a strong enough word to describe our relationship with the show.  We had plastic figures of the major characters, and we went through phases where we played with nothing else for weeks on end.  We would have plot lines that lasted for days, we created a host of original characters that periodically joined them for adventures, and we created fantastic sets of the bridge, sickbay, the transporter room, and more.  Sometimes setting up to play Star Trek took up almost our whole pre-lunch half-hour of playtime, and then we'd have to wait until we'd finished doing our schoolwork to get any real adventuring in. 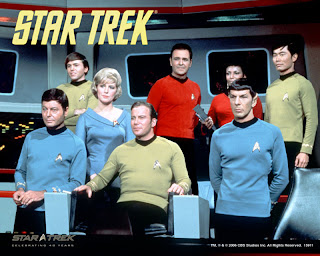 Yes, I played with action figures at the age of 14.  With my younger brother.  Matter of fact, we played with them until I went to college, and when I'd come home on breaks, we'd play with them some more.  Not just Star Trek, but Star Wars, X-Men, Batman, GI Joes, and several other worlds.  Sometimes we did cross-overs between different universes.  It was awesome.

Anyway, we got into Star Trek when my dad ran across one of the movies on TV or something, and my brother saw a slice of it and pretty much fell under Spock's spell.  I'm not sure if it was Spock's intelligence or logic or what, but Johnnycake decided then and there that Spock was the coolest guy ever.  Kind of instant hero-worship, as I recall.  Me, I was less interested (I'm still not a big fan of the movies).  But Johnnycake found this set of action figures and wanted to get them, only he didn't have the cash to buy the whole set. 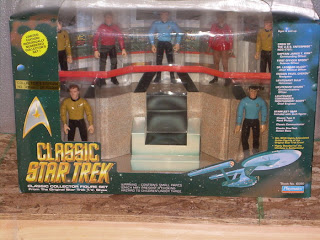 So he convinced me to go halvsies by agreeing to let me be the captain (who, to my perpetual embarrassment, I initially thought was named Captain Curt) if he could be Spock.  Ever power-hungry, I agreed.  We bought the figures, then set about learning about their universe.  Our library had six episodes of the show on VHS, all from season 3, and those were the basis of our understanding of the Star Trek world for several years.  Well, those, plus a handful of episodes we taped off cable while at our grandparents' house, and a couple more I bought on VHS.  Later, the same TV channel that introduced us to Combat! began showing Star Trek, and we got to know the show much better.

We ended up with Star Trek calendars, toy phasers and communicators, oodles of action figures, books about the show... it was probably the biggest obsession of my teen years.  Yes, I loved it much more than Combat! at the time, though over the years my interest has waned somewhat.  But I still enjoy the show and watch an ep every now and then.  And I still have my action figures. 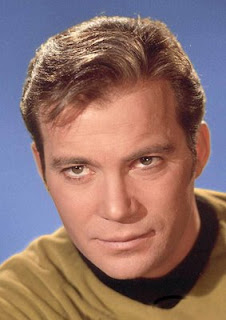 If you want to know what I thought of the recent movie reboot of the series, here's my blog post on that topic. 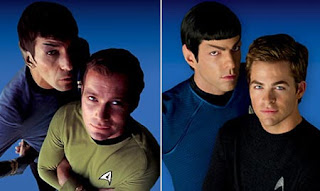 Posted by Hamlette (Rachel) at 6:19 PM No comments:

I have been stuck on this prompt for weeks.  The pilots of so many of the my favorite shows rock, but at the same time, most of them aren't nearly as good as later episodes, so they're not particularly dear to my heart.

I guess I'm gonna have to go with "Pilot," the Lost pilot.  It's mesmerizing and memorable, a plane wreck you can't look away from.  And it includes that show-defining quote from Charlie:  "Guys, where are we?" 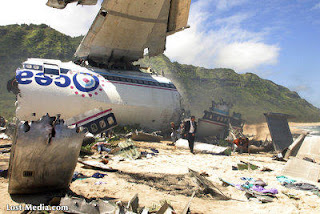 In fact, as soon as Nanowrimo ends, I'm planning to rewatch the pilot while it's still available for free here on hulu.com. 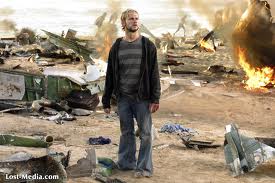 Posted by Hamlette (Rachel) at 1:31 PM No comments:

I'm gonna go with the finale of season 3 of Lost, "Through the Looking Glass."  When I realized that the scenes in LA were flash-forwards, not flash-backs, and that some people had actually gotten off the island, I nearly flipped my lid.

Nathan Fillion's current show, Castle.  The library has the first season, so right now my plan for a post-NaNoWriMo party is me getting the first couple discs and vegging during naptime on multiple, successive afternoons.

Posted by Hamlette (Rachel) at 9:18 PM No comments:

This isn't the best quote ever, or even my favorite quote.  But it's probably the one that gets used the most in our household right now.  It's from The Hound of the Baskervilles (1988) which is technically a TV movie, but hey, it's part of the Grenada Television series, so I say it counts.

Watson has at last discovered Holmes living on the moor, and Holmes invites him into his little hidey hole, then offers him some stew that a local woman sells him every day.

Holmes then makes the most apologetic smile you'll ever see on his stern face.

I love the moment, and we use either or both parts of that quote all the time around here.

We Interrupt This Meme to Bring You...

Yes, it's that time of year again.  And I'm participating again.  You can see my profile here, read excerpts of my novel when I post them, see how far I've gotten (and how far I have to go yet), etc.  I'm writing a novel tentatively titled Swapped, though I'll probably change that.  It's about a young lit prof whose apartment burns down, so she moves in with a colleague, but then she starts falling for her new housemate's boyfriend, and her own boyfriend starts getting interested in her housemate...

I'll try to finish up this meme by the end of November, though.
Posted by Hamlette (Rachel) at 10:02 AM No comments: 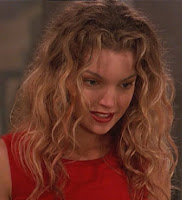 This would be Glory (Clare Kramer), the main villian from season 5 of Buffy the Vampire Slayer.  Pretty much everything about her annoys me, from her eyes to her attitude to her voice to her clothes, and everything else.  Despite there being some pretty good stories in season 5, some great subplots that don't directly involve Glory, I kinda avoid most of the season because I just can't stand her.
Posted by Hamlette (Rachel) at 9:32 PM 2 comments: