Day 26 - A film that you love but everyone else hates

I don't think I have a real answer for this.  I know at least one person who likes every movie I like.  So I will pick a movie that my friend ED and I watched alllllllll the time in college, but that was considered a total disaster by most critics, and was a stupendous commercial failure as well.  I am, of course, talking about Ishtar (1987). 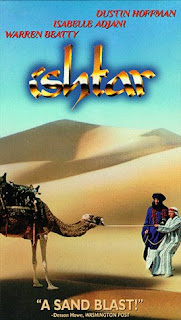 Ishtar is the far-fetched tale of a singing/song-writing duo who get accidentally embroiled in middle east intrigue. Think North by Northwest crossed with Some Like it Hot.  The singers are played by Dustin Hoffman and Warren Beatty.  Yeah. 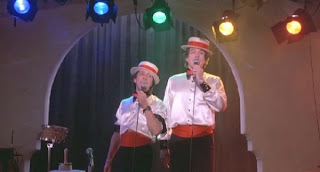 I think that maybe people didn't realize that Ishtar is supposed to be funny. I'm not sure how they could have missed that fact, but perhaps the presence of Hoffman and Beatty threw them off?  If it'd been, say, Steve Martin and Chevy Chase, then would people have understood?  But it's Beatty and Hoffman being so very serious that makes Ishtar funny!  They belt out insane lyrics like "Hot fudge love, cherry ripple kisses" with perfect earnestness, they struggle through the desert leading a blind camel, Warren Beatty's character idealizes Dustin Hoffman's character for being so much better with women... and they never crack a smile or wink at the camera.  How anyone can help but laugh is beyond me. 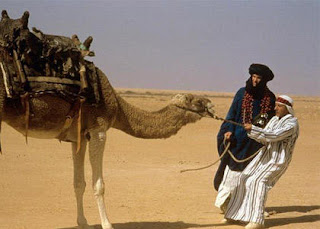 ED and I used to quote this movie all the time, and sing songs from it.  Our favorite bit of dialog we would do with each other came from the above scene and went like this:

Not exactly standard humor, I grant you.  But it made us laugh and laugh!  We'd do it whenever a sudden wind kicked up.

Our favorite song from the movie went like this:

Telling the truth can be dangerous business;
Honest and popular don't go hand-in-hand.
If you admit that you can play the accordion,
No one will hire you for a rock-n-roll band...

I thought this was going to be tough.  I was pretty sure I didn't have a favorite villain -- I tend to side with the Good Guys, you see.  I started a list of villains, figuring I'd just eliminate them one by one, and whoever was left would be It.  I got six or eight names listed.  I scanned my movie collection to see who I could add.  And that was when I realized the list was pointless.  Because I do have a favorite villain:  Eli Wallach as Calvera in The Magnificent Seven (1960).  In fact, I pretty much said so in this post 6 years ago.  How could I forget? 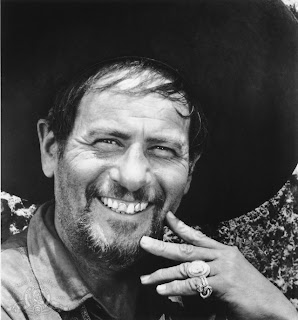 In both the commentary on my DVD edition and his autobiography, The Good, the Bad, and Me, Eli Wallach shared that he was reluctant to play Calvera because he had a few minutes at the beginning of the film, and then he disappeared for over an hour.  Then someone (his wife?  I forget) pointed out that the other characters spend that entire hour talking about... Calvera.  So he took the role, got some teeth capped in gold, bought the most tremendous sombrero he could find, and turned what could have been a one-note bad guy into a charming, unforgettable villain. 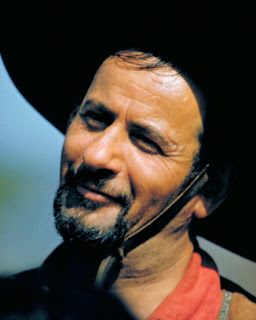 But why is Calvera my favorite villain?  I think it's because he treats the business of being a bandit chieftain as just another day job.  Part of this is due to Wallach's everyguy approach to the role, and part is how it's written. Calvera isn't out to be Mean and Nasty and Evul.  Robbing just happens to be how he makes his living and provides for the men who depend on him.  When he captures the Good Guys, he doesn't kill them.  He takes their guns and sends them packing, but he later returns their guns and says, "Hey, no hard feelings, this is just business, right?"  They don't see it that way, of course, and his confusion over why gives him one of the best final lines I've heard from a villain:  "You came back.  Why?"  He honestly just doesn't get it.

Of course, he spends more of the movie looking like this than being all cute and smiley: 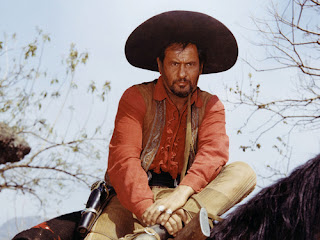 But still, so lovable, in a grumpy way :-)  Oh, and Wallach's autobiography is a great read!  I totally recommend it.
Posted by Hamlette (Rachel) at 5:48 PM 1 comment:

Day 24 - Favorite film based on a book/comic/etc.

I guess all I'm left with is The Lord of the Rings.  Which I came at entirely backwards, as far as this question is concerned -- I saw the movies before I read the books. 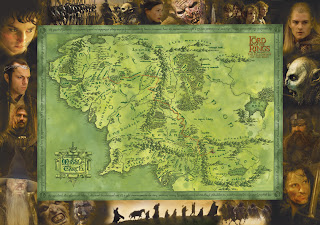 I realize this is heresy and lunacy and idiocy and probably several other things ending with -s/cy as far as most Tolkien fans are concerned, but I can't help it.  I read The Hobbit in high school and thought it was okay, but kinda boring.  (And yet, I'm all excited about the movie version coming out at the end of this year.  Go figure.)  I figured, why read Tolkien's longer work and spend 1,000 pages being bored?  It wasn't until The Fellowship of the Ring came to the big screen in 2001 that I got interested.  And, truth to tell, there were only two reasons I went to see it at all.  The first was that all my friends were going, including my boyfriend, who usually couldn't care less about seeing a movie in the theater.  The second was Sean Bean.


I think Boromir would have been my favorite character anyway, but having Sean Bean play him sure didn't hurt ;-)  In fact, I can't imagine anyone else in the role.  That goes the same for most of the principle characters, with the exception of Viggo Mortensen as Aragorn, but I discussed that here long ago.  I love these movies, these characters, the setting, the story, the dialog -- I can't imagine them ever being surpassed on film, and I guess that actually makes them the perfect choice for this post. 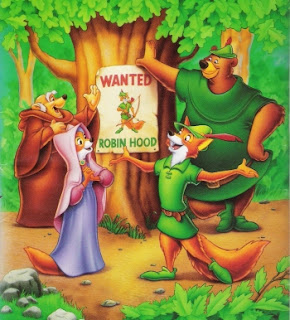 I can't remember when I first saw this movie -- it's part of my consciousness from as far back as I can remember.  It has fostered a lifelong love of the Robin Hood legend, and I own several other film versions of the Robin Hood story -- I love the live-action Disney version, The Story of Robin Hood (1952), and yes, Errol Flynn is great fun too.  I also own 5 or 6 different book versions as well.

But back to the animated movie.  This is my favorite style of Disney animation, with backgrounds that look a little more like stage sets than reality.  It's the same style you'll find in most of their 60s movies, many of which I count as favorites.  And oh, how I love the characters.  Honestly, I think this Robin Hood is the handsomest one I've seen -- I had a total crush on him when I was a kid. 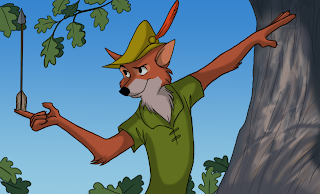 When I was little, I had the Disney storybook record for this movie, and I nearly wore it out.  We didn't get to watch movies much, even after the advent of VCRs, so this is how I experienced the movie most of the time as a kid. 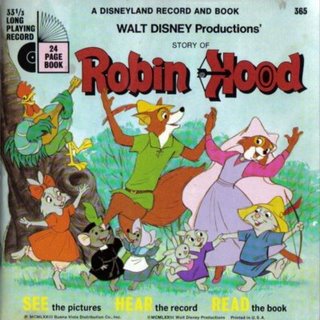 We went to Disneyland when I was 6, and I got really mad at my mom because she went over to the person dressed as Prince John and hugged him.  I think now she was trying to show my brother and I that they weren't scary, but as far as I was concerned, she was consorting with the enemy. 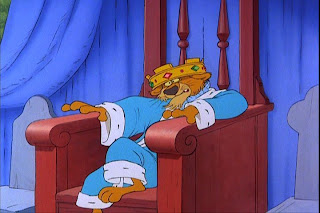