Well, Cowboy and Noumenon and I are going car hunting in the morning. Noumenon doesn't have a car and thinks it's about time he acquired one. And repairs on our Bubble Car are starting to add up to more than it's worth. So we're gonna go look at new ones.

Car hunting is dull. There are no guns involved, no stalking of prey, no hiding in grass or bushes or trees.

In other news, we've discovered another song I mis-hear. I seem to have an especial problem with Elvis songs. In his song "Kentucky Rain", I always heard the line, "Kentucky rain keeps pouring down / Another hedge, another town that I'll go walkin' through..." in the chorus. Cowboy informs me it's actually "And up ahead's another town." Hmph. There goes my mental image of Elvis slogging along between big wet hedges.

In yet other news, I watched a very odd Johnny Depp movie last night, at the recommendation of ED: Dead Man. Odd Western thing with a much different end than I'd been hoping for. Mostly I just liked watching Johnny wandering around with war paint and a pistol.
Posted by Rachel Kovaciny at 3:03 AM 3 comments:

I just sat down to watch Hamlet, the Ethan Hawke version. I bought it used from the movie rental place a couple months ago, but hadn't had time/inclination to watch it until now.

Popped in the vhs. It's not the Ethan Hawke version. It's the Mel Gibson version ... which I already own! GAAAAAAAAH! I love Mel's version, I do, but I really really really really wanted to watch the Ethan Hawke one tonight! I've been looking forward to this for over a week! Noooooooo! Not to mention, I already have this version! Those bloody morons put the wrong version in the case! Oh, I'm so mad. So very, very mad. Must find my angriest movie and watch it to vent. Something with much violence. Maybe Desperado or Once Upon a Time in Mexico.

I can't believe this. I wasted $2, I have to try to find this version again, and my whole night off is now severely screwed up. Grrr. Arrgh.

Maybe I'll watch the premiere of Firefly. I seem to recall some good violence and angst going on there.

It's a lifelong problem. For instance, my favorite movie is The Man from Snowy River, which I saw in the theater when I was about 2 years old. And I've seen it a zillion times since then, on vhs and dvd. For years I believed that at one point a ranch foreman yelled to the ranch hands, "Anyone not ready to leave by sunup will get the entire landscape." I figured that meant that whoever wasn't ready to leave on the roundup on time would be stuck taking care of all the chores on the whole big ranch, the "entire landscape." It wasn't until years later, when I went through this phase where I'd watch my favorite movies with subtitles to pick up stuff I usually miss (or mis-hear), that I learned that he actually yells, "Anyone not ready to leave by sunup will get their tail ends kicked." Quite a difference.

I've mis-heard a lot of things in my life. For a very long time, I believed that the song "I'll be Home for Christmas" contained the lines, "Christmas Eve will find me/Wet, alone, likely." When I was little, I loved listening to the Elvis Christmas record my parents owned. Mom explained to me that that song was about soldiers who couldn't be home for Christmas because they were stuck far away fighting a war (the first time I conceived of war as a terribly evil thing). So if they were away from their families, fighting a war in the snowy winter, they were likely wet and alone, right? Yeah, well the song actually says, "Christmas Eve will find me/Where the love-light beams." I like my version better.

Most of the time I can make my mis-hearings make some sort of logical sense, as you can see. Not always. There's the celebrated case of Goldeneye. At the beginning, 006 (Sean Bean) shouts, "Closing time, James, last call." To which 007 (Pierce Brosnan) replies, "Prime your paint." That never made much sense to me. He actually says, "Buy me a pint." Good old closed-captioning, it's so helpful.

My oddest mis-hearing, however, is probably from the Temptations song "My Girl". It wasn't until after we were married that I found out from Cowboy that they're not actually singing, "I've got so much honey/Debegeezendubee." Seems what they really say is, "I've got so much honey/The bees envy me." Here I thought they were just going all Simon & Garfunkle and throwing in random nonsense words when they couldn't think of good lyrics.

Oh well. At least only rarely does this occur in conversation. Like the night I thought a co-worker had just informed me she had hemorrhoids. Turns out she really just had to have an MRI. Lucky her. At least her ears function correctly.
Posted by Rachel Kovaciny at 9:46 AM 1 comment:

So as part of our anniversary celebration this year, Cowboy took me to see Cars. At a drive-in theater. How perfect is that?

It's a fun movie. It's funny, it's (dare I say it?) cute, the graphics are glossy, and the voices are perfectly cast. I didn't drive out of the theater saying, "I have to buy this movie!", but I did say, "I want to see that again!" In the theater, if possible (we missed the first ten minutes or so because we had to stop and ask for directions). And I'll probably end up buying it, although I may manage to wait until the price goes down a little, not snap it up for $20 when it first hits shelves. We shall see.

So anyway, I liked it. A lot. Lightning McQueen and Doc Hudson (Owen Wilson and Paul Newman) were supposed to dominate the movie, and most of the buzz has been about them. But the character that got the most laughs, as well as a few tears from yours truly, was Mater. Yes, the tow truck voiced by Larry the Cable Guy. Now, LCG doesn't do much for me, he's not really my kind of humor usually. But he had the perfect voice, accent, and even catchphrases for this role, and he made me miss home a lot. McQueen and Hudson are cool, but Mater is just plain good people.

Some say the pace drags. Some say the story is too corny and cutesy. Well, some people are stupid. It was a good movie, on par with Monsters, INC, in my ever-so-humble opinion. Not mind-alteringly brilliant like the Toy Storys or The Incredibles, not heartwarmingly hilarious like Finding Nemo. But it was a sweet, satisfying ride that I'd like to take again sometime.
Posted by Rachel Kovaciny at 9:21 PM 2 comments:

Curse my procrastinatory ways! I should have ordered the soundtrack for the 1999 stage version of Oklahoma! right away when I saw that Amazon.com only had one copy of it. But noooooo, I had to think about it for a couple days, and now it's gone :-(

You see, I just got a dvd of this version from the library last week because...Hugh Jackman plays Curly. And plays him beautifully. Possibly better than Gordon MacRae. More dangerously, definitely. Gordon is lovely, don't get me wrong. But he lacks...edge. Hugh has edge to spare.

I may have to get this version on dvd. It's marvelous. It's just a stage version that was filmed and then shown on tv, but it rocks. 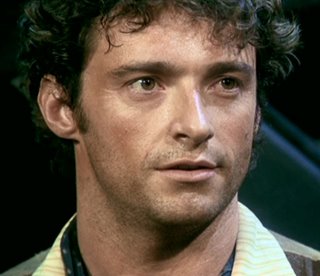 Of course, I still adore the Gordon MacRae/Shirley Jones version. But if they made a movie version with Hugh Jackman as Curly...I might like it a teensy bit better. He's very layered, with this smirky impudence on the outside, and then underneath is this delicious uncertainty that I adore. And deep down is a core of danger that you do not want him to tap into.

Isn't he adorable? (Thanks for the screencap, Dkoren!) A year younger than when he first donned claws and sideburns...and with a clear tenor voice, too! And he dances! Wow. No wonder he's married (oh, wait, I am too....)
Posted by Rachel Kovaciny at 1:35 AM 4 comments:

It's truly official now. I'm going to the Combat! Fanfic Recon in Atlanta in September! I just got my plane tickets this morning!

What am I thinking? I'm spending a weekend in Atlanta with a bunch of crazy writers/readers all obsessed with a 1960's tv show about WWII? Only one of whom I've ever met before in person? I must be crazy, huh?

More like giddy with glee. We fanfic writers have their own email list, seperate from the 'official' C! discussion list They've been planning this Recon (our word for convention, basically) for months and months and months. And I didn't think I'd be able to go, which made me very glum indeed, whenever I thought of it.

But due to Cowboy's love of spoiling me, a little deviousness on my part in regard to the usage of vacation time and switching days off at work, and my ever-burgeoning friendship with DKoren, I'm going going going going going!!!!!!!!!!

It's not gonna be like the 'real' recons, aka "Comboat '96" and "Recon 2000". None of the stars of the show will be there (although there is a mysterious Surprise Guest whispered about behind closed tent flaps). But there will be about 20 fanfic writers (I think all women--we have a Token Male on our fanfic email list, but I don't think he'll be attending) all running around a hotel doing crazy stuff and writing and reading and watching C! eps, etc.

Plus, after Recon, I'm flying from Atlanta to HOME! And Cowboy's flying down to meet me there, and we'll spend a week with my parents (and Grandma will probably be there by then) and friends. Yippeeeeeeeee!
Posted by Rachel Kovaciny at 10:14 AM 5 comments:

So as of today, Wal-Mart no longer sells movies on VHS. At least, the one I work at doesn't--I'm not sure if this is a company-wide thing or not. We do still sell blank ones, I believe. But not prerecorded tapes. And you know that when Wal-Mart stops selling something like that, it's doomed.

The world now belongs to the DVD.

I remember the first VHS tape my family got. It was a taped-off-TV version of The Sound of Music. To this day, I can watch the normal version of that movie and tell you exactly where all the advertisements went, and which parts were cut out to shorten it to TV-acceptable length. We watched that movie all the time. Well, okay, every time one of us got sick or something. It was the only movie we owned, and it cost money to get movies even from the library back in MI, which is where we lived at that time.

I think the first "boughten" video we got was A Fistful of Dollars. I have that memorized too.
Posted by Rachel Kovaciny at 9:22 PM No comments: