A few years ago, I started comparing various versions of Hamlet as I watched them by grading the various portrayals and the overall production. But I've seen far more productions than I've reviewed in that way, so this page is now where I've collected all the Hamlets I've seen, with a few comments from me on what I like or dislike about them. If I rated the character portrayals and overall productions for my Hamlet Comparisons, I've got those ratings included here too. (I'm leaving off Murder Most Foul since it doesn't actually exist, alas.)

Click on the dates to read the full reviews I've written so far. 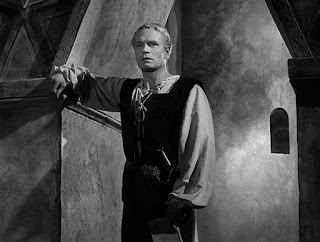 1948 -- Laurence Olivier.  The one everybody talks about. I find Hamlet himself to be detached and remote, which I don't care for, though I understand what Olivier's going for.  But I love Jean Simmons as Ophelia.  The production as a whole feels stagey, but I like certain aspects of it.  And the cinematography is gorgeous. 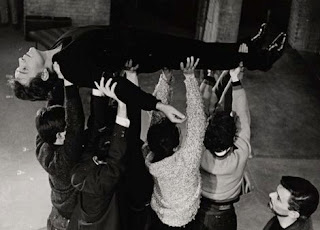 1964 -- Richard Burton.  The one that gave me my favorite soliloquy. Hume Cronyn is an excellent Polonius, and the cast overall is solid. They play the whole thing in modern street clothes as if it were a final rehearsal before the costumes arrive, and with minimal scenery and props, which strips the whole production of distractions and makes you focus on the words and acting. And of course, Burton has a wonderful voice, and his performance is excellent. Plus, it's directed by Sir John Gielgud, who still holds the record for playing the role of Hamlet onstage the most often.  I dearly love this version, and absolutely recommend it, though it's getting hard to find on DVD. Amazon Prime Instant Video has it as of early 2018, but I don't know how long that will last.

Hamlet: A+
Horatio: B+
Laertes: C
Ophelia: B+
Claudius: B
Gertrude: B-
Polonius: A-
Overall Production: A-

1968 -- Andrea Giordana (as Chip Corman).  The spaghetti western one.  It's alternately known as Johnny Hamlet and The Wild and the Dirty, and it is... fascinating, actually.  Giordana is inscrutable, yet relatable playing Johnny Hamilton, a Civil War veteran returning home to discover everything is rotten.  The best part of the whole thing is undeniably Gilbert Roland as Horace, Johnny's mentor, best friend, and guardian angel who swoops in to rescue him time and again.
Hamlet/Johnny Hamilton: A
Horatio/Horace: A+
Laertes: N/A
Ophelia/Emily:  C
Claudius/Claude:  B-
Gertrude/Gertry:  C
Polonius/Sheriff: C
Overall Production: N/A because it's a retelling, not a production of the play. 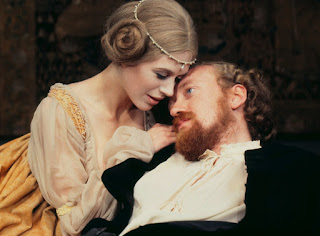 1969 -- Nicol Williamson. The boring one. I did like how they twisted the nunnery scene to make it playful instead of mean. And Anthony Hopkins is a great Claudius. But overall, skip. 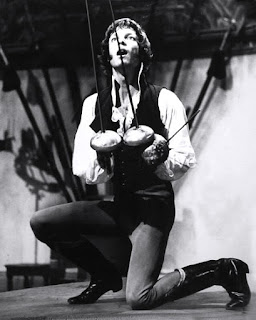 1970 -- Richard Chamberlain.  The uneven one. Chamberlain had been playing Hamlet on stage in England, and he plays all his scenes with other actors in a somewhat stilted way, but his soliloquies are marvelous.  The rest of the cast ranges from okay to boring to rather awful.  Can't say I recommend this one unless you're really into Hamlet or a major Chamberlain fan. 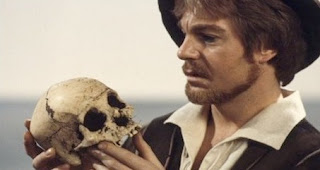 1980 -- Derek Jacobi. The one where everyone is really nice. Patrick Stewart plays a pretty cheerful and kindly Claudius, and Polonius (Eric Porter) is fairly benign. Jacobi is a mournful Hamlet, gentle and pensive and soft-spoken. Worth seeing, especially if you want to see it in Elizabethan costumes.  Or if you want to see Patrick Stewart play Claudius in a radically different way from the 2009 version. 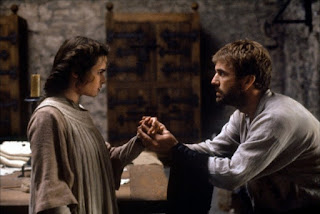 1990 -- Mel Gibson. The one where people get hung up on the Oedipal interpretation, even though the Jacobi version is not much different. But it's a very accessible production. I like Gibson in the role so much, as he's got lots of practice playing off-balanced characters and does it well. Helena Bonham Carter is a very effective Ophelia, Glenn Close is not too distracting as Gertrude, Alan Bates makes a really menacing Claudius, and Ian Holm is a conniving Polonius. I do recommend this version, despite the ick factor. 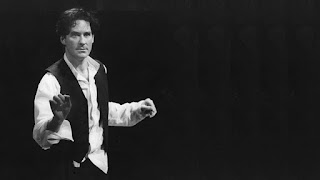 1990 -- Kevin Kline. The one I really ought to see again some time. I don't remember it much at all, other than that I didn't like it well enough to watch it a second time before I took it back to the library. 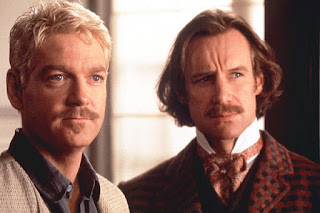 1996 -- Kenneth Branagh. The one with allllllll the famous people in it that is reeeeeeeally long. It uses pretty much the full text, and it's magnificent in scope and scale. Great acting from Branagh as Hamlet, Kate Winslet as Ophelia, and Derek Jacobi as Claudius. And one of my favorite Horatios ever: Nicholas Farrell. If you're willing to spend four hours on it, see this one, though do be aware there's a love scene or two. 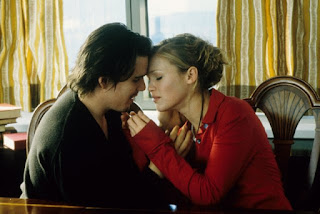 2000 -- Ethan Hawke. The one where Hamlette finally finds the perfect Laertes in Liev Schreiber. And I really love Julia Stiles as Ophelia. Bill Murray is an excellent Polonius -- might tie with Hume Cronyn as my favorite. Kyle MacLachlan is a nicely menacing Claudius, and Sam Shepherd is a very sympathetic Ghost. And Hawke is a very young, very easy-to-worry-about Hamlet. But I love Liev Schreiber as Laertes, and that's all there is to it. I heartily recommend this one, though do be aware it's rated R, mainly for violence. 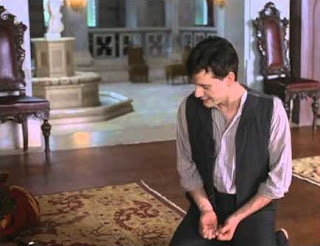 2000 -- Campbell Scott. The one set in America in the early 20th century. It's got a good Horatio (John Benjamin Hickey) and awesome costumes. Scott is a pensive and interesting Hamlet. Worth finding if you've seen some of the more well-known adaptations and want to broaden out. 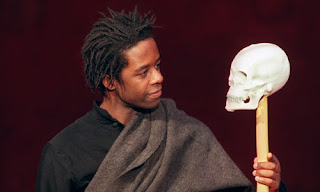 2002 -- Adrian Lester. The one set in India or somewhere equally Eastern. This one cuts up the text and reassembles it a bit oddly, but it's a nifty production. The sets are really vivid and interesting. 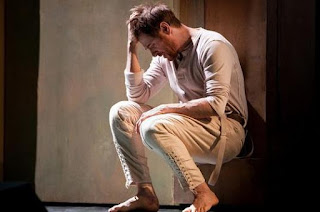 2004 -- Simon Keenlyside. The opera. Keenlyside is a delightful Hamlet, very sympathetic. It's opera, so the text isn't the same as the play, especially since it's based on the French translation by Alexandre Dumas. It has a totally different ending! And a super-creepy Ghost. If you at all like opera, try it out.

Hamlet: A
Horatio: N/A
Laertes: F for making me Furious (B+ for everything except the ending)
Ophelia: B+
Claudius: C
Gertrude: C
Polonius: N/A
Overall Production: N/A because it has so many differences.

2006  -- Daniel Wu. The Chinese one that's awfully violent. It's actually titled The Banquet, or Legend of the Black Scorpion. It's fascinating if you're really into Hamlet and want a fresh retelling that does not stick to the play or use the text. Or if you like Chinese movies about ninjas and stuff. Otherwise, skip. 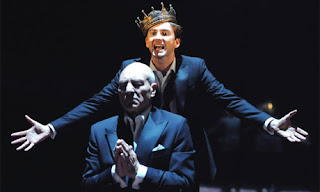 2009 -- David Tennant. The one where Captain Picard and Dr. Who square off. Excellent modernization, and Patrick Stewart plays the scariest, smoothest, slipperiest Claudius ever. I like Peter De Jersey a lot as Horatio, but this is clearly the Tennant/Stewart show, and everyone knows it. I definitely recommend this one.

2009 -- Jude Law. The one I saw live on Broadway. The one I would love to see again, except the fools who run the theater didn't think to capture it on film. Gugu-Mbatha Raw played Ophelia as timid and innocent. Matt Ryan played Horatio, and he was soooooo good. One of my favorite Horatios. Jude Law was, of course, excellent as Hamlet -- very active and angry and into pacing around barefoot. How I wish they'd filmed it. 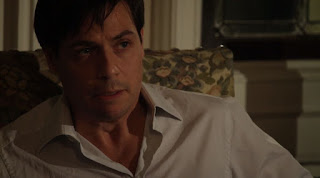 2011 -- Bruce Ramsay.  The film noir one that takes place all in one night, cuts the running time to under 90 minutes, and still manages to be one of the best versions I've ever seen.  This might have edged out the 2000 Ethan Hawke as my favorite version.  I definitely recommend it, though do please be aware it's rated R for adult scenes you can easily skip.

Hamlet: A
Horatio: A+
Laertes: B+
Ophelia: A+
Claudius: A
Gertrude: A
Polonius: A
Overall Production: A 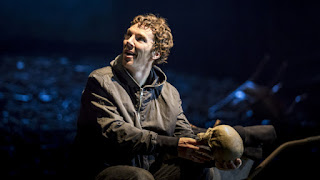 2015 -- Benedict Cumberbatch. The one I didn't see live, but saw as a telecast to my local-ish movie theater.  Cumberbatch was a very emotional and accessible Hamlet, and Ciaran Hinds was a formidable Claudius. Sian Brooke made a compelling and piteous Ophelia. Everyone else was acceptable, though I was disappointed by Leo Bill's Horatio and his extremely limited stage time.

Hamlet: A+
Horatio: D
Laertes: C
Ophelia: A
Claudius: B+
Gertrude: B-
Polonius: B
Overall Production: B+ 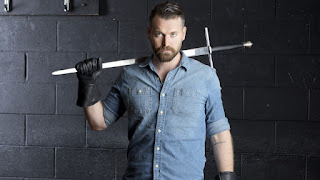 2018 -- Josh Innerst.  The one I saw live at the Blackfriars Playhouse and loved so much, I would willingly drive 2 1/2 hours one way to see it again.  Innerst was just the right mix of inscrutable and relate-able, passionate and cerebral, skeptical and credulous.  I wanted to hug Benjamin Reed's Laertes because he truly rivaled Liev Schreiber in the 2000, in my opinion -- and I never thought I'd see another Laertes who pleased me that much.

Hamlet: A+
Horatio: A-
Laertes: A+
Ophelia: A
Claudius: B+
Gertrude: B+
Polonius: B+
Overall Production: A

2018 -- George MacKay in Ophelia, starring Daisy Ridley.  This is based on a novel by Lisa Klein that retells the story from Ophelia's point of view, and adds a lot of new twists to it, kind of melding in some Romeo and Juliet here and there.  This is a sumptuous production, and I can't wait to watch it again so I can review it more fully.

Hamlet: A
Horatio: A-
Laertes: A-
Ophelia: A
Claudius: A
Gertrude: A-
Polonius: B
Overall Production: A