If you hadn't guessed from the title of this blog, I'm enormously fond of William Shakespeare's play Hamlet, Prince of Denmark.  It speaks to me on many levels, and every time I read or watch it, I learn more about the play and about myself.  To date, I've seen 17 different versions of it, which I talk about as a whole on this page. 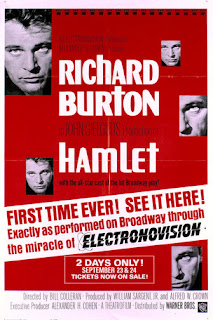 Today, I'm going to talk about the 1964 version that stars Richard Burton, which you can find on DVD (I recommend checking ebay, as Amazon's gone a bit pricey on it lately), and which you can also watch on Amazon Prime right here (for FREE at the moment).  This is a very special version because it was not made as a film, unlike the Olivier, Gibson, and Branagh versions you might be more familiar with.  Instead, this is a presentation of Burton's spectacular Broadway run.  (To my knowledge, he still holds the record for most performances in the role on Broadway.)

Someone in Hollywood came up with the idea of filming a Broadway play and then showing it in theaters so that people across the country could experience really wonderful theater entertainment without having to try to get to NYC.  They called it "Theatrofilm" and used something called "Electronovision" to record two successive performances.  They had to use special cameras so that they could capture the play without having lots and lots of lights like a normal filming experience would use -- they didn't even need the house lights up!

The idea of Theatrofilm never really took off, but we do have similar things today, like National Theatre Live, which broadcasts London theater on movie screens here in the US.  I got to see Benedict Cumberbatch as Hamlet that way twice, actually.  Anyway, Theatrofilm was going to be a big deal, except that audiences didn't embrace it like execs hoped.  You can learn a whole lot about it on this site, if you're curious -- it has photos of promo materials and interviews with Burton and so on. 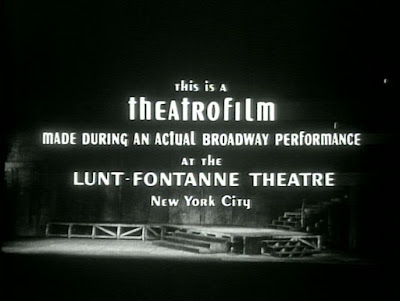 This production of Hamlet opened on April 24, 1964, the 400th anniversary of William Shakespeare's birth.  It was directed by Sir John Gielgud, who I believe still may hold the record for most performances in the role overall -- he played Hamlet in 5 different productions between 1930 and 1944.  There's a really wonderful book called John Gielgud Directs Richard Burton in Hamlet by Richard L. Sterne, which is a transcript of things said during the rehearsals for this particular production.  Sterne played one of the random men in the Danish court, and he thought that having Gielgud and Burton there discussing this play day after day should be captured for posterity.  So he smuggled a tape recorder in a suitcase into the rehearsals (remember, this is the '60s, so it filled that whole suitcase) and captured so many amazing insights into this play, and into the process of bringing a play to life.  Which means we really know a lot about how things went behind the scenes in this production -- Gielgud and Burton discussed the character of Hamlet endlessly, and I feel like they both understood him so, so well. 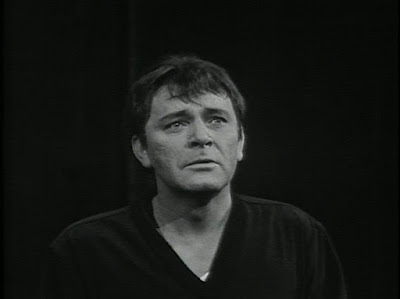 Richard Burton is one of my absolute favorite Hamlets.  Probably in my top three, to be honest.  Definitely in my top 5.  He's brooding and sad, of course, but he's also dangerous and virile.  He shouts a lot, though reportedly his performances varied wildly from night to night, so maybe we just get the shouty version because that's how he was feeling the two nights they filmed this. 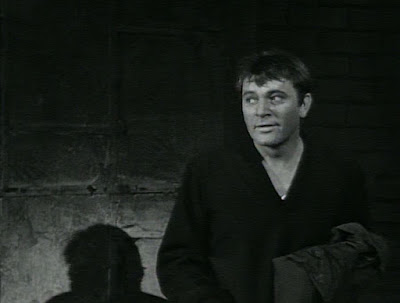 But what I really love about his performance is how he brings out a sarcastic humor in Hamlet's words.  The first time I watched this, more than a decade ago, his interpretation of the "Rogue and Peasant Slave" soliloquy transfixed me.  It's been my favorite of Hamlet's soliloquys ever since.  Yes, even above the "To Be or Not to Be" speech.  He goes through so many emotions there, from relief at being alone to self-rebuke, to anger, annoyance, amazement, fury, self-reproach, amusement, and cunning intelligence.  When an actor nails this speech, I am filled with delight.  And Burton does so with ease. 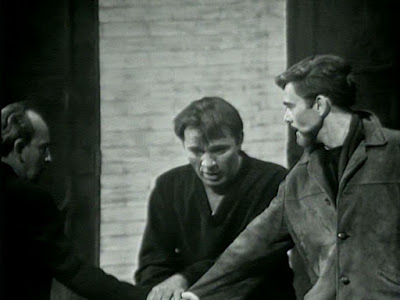 The other actors and actresses are good.  Hume Cronyn is an especially amusing Polonius, though sometimes he seems a little to tickled by his own lines and delivery... but maybe that's just me.  I like Robert Milli as Horatio, he's very sympathetic.  Maybe a little bland, but he has a lovely beard.  Linda Marsh's Ophelia is sweet and worried, and I like her quite well. 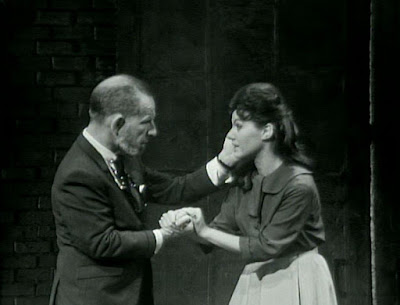 The entire play is performed in "street clothes," normal clothing of the day and age, some of it from the costume wardrobe and some belonging to the actors themselves, IIRC.  It's staged as if it were the final run-through before the dress rehearsal, so props are minimal as well. 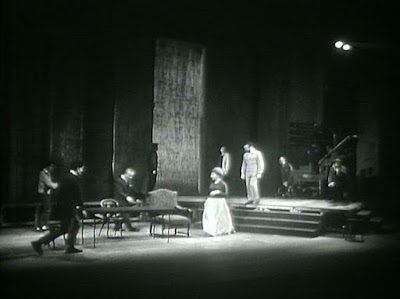 I find this helps me focus on the words, story, and characters, but my husband found it a bit silly and boring, so your mileage may vary.  Because this is stage acting, not movie acting, and because it's from 50 years ago, you may find the acting styles a bit different from what you're used to.  But if you enjoy Shakespeare or are a Burton fan, definitely seek this out.  It is well worth your time. 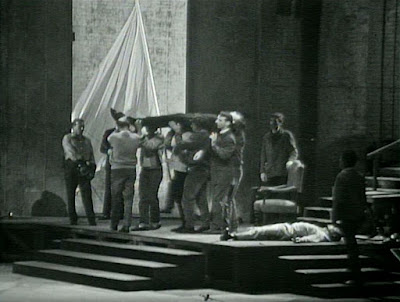 Here's my rating of the acting and production, for my Hamlet Adaptations page:

Hamlet: A+
Horatio: B+
Laertes: C
Ophelia: B+
Claudius: B
Gertrude: B-
Polonius: A-
Overall Production: A- 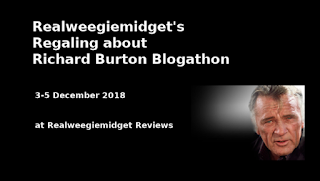 This has been my entry into the Regaling About Richard Burton Blogathon hosted by Realweegiemidget.  Check out the main blogathon post for links to other posts by the rest of the participants! 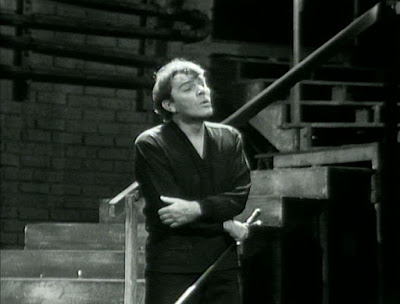