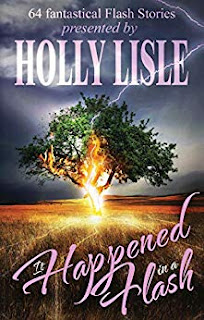 That's right, my friends!  My "flash fiction" piece called "Knighthood" now appears in the brand-new anthology It Happened in a Flash presented by Holly Lisle.  You can get the e-book for FREE on Amazon or on Barnes and Noble, and other places too.

Flash fiction is very, very short stories, also sometimes called "short-shorts."  The sixty-four stories in this anthology all revolve around something impossible happening, and they're all 500 words or less.  And if you think it's tough to cram a full story into 500 words, with a protagonist, antagonist, setting, and plot -- you're right!  But it's totally possible, as the stories in this attest.  Including mine!

My story "Knighthood" is about an actor named Andrew who realizes one day that he needs to stop pretending to be a knight.  It was inspired by two things that happened to me in real life.  Shortly before I wrote this story, I took my kids to see a live performance of "Beauty and the Beast" at the library.  With only a handful of props and costumes, some rudimentary scenery, one actor and one actress told the entire story beautifully and cleverly.  I loved it.  I spent a lot of time thinking about how much work they put into that performance for a bunch of kids.  And a story idea glimmered into life.  But it wasn't until I remembered something else that happened twenty years ago that the story really began to take shape.

My freshman year of college, some friends of mine invited me to go to a Renaissance Festival with them, in costume.  It was crazy fun.  Afterward, we all went to a big mall for supper and just to bum around like college kids like to do.  And we stayed in costume.  Got lots of funny looks, some tourists asked to take our pictures, and we generally had a splendid time.  One of the guys was dressed like a knight, very King Richard-like, big lion on his chest and some actual chain mail, and a sword at his side.  (A fake sword.  I think.)  At one point, we strayed into a toy store.  A little boy there looked up at this guy dressed as a knight, all goggle-eyed, and asked, "Are you a real knight?"  And that guy regretted his answer, because he felt later like he should have said, "Yes, I am."  But he didn't, he said he wasn't a real knight, but he wished he could be one.  And the little boy's face just crumpled.

Well, mix that idea with the whole actor-in-a-tiny-travelling-theatre-troupe scenario, and I had me a story.  Read it yourself and see what you think.  Leave some feedback wherever you download it, or on Goodreads!

Please note that while my story is 100% squeaky clean, the anthology as a whole would be rated PG-13 -- no really smutty stuff, but there may be some mildly objectionable content in other stories.  I've only read six or seven of them so far -- none have been something I found distasteful so far, but your standards may be different from mine.
Posted by Hamlette (Rachel) at 9:05 AM