My Ten Favorite New-to-Me Movies of 2018

Here we are again, at the end of another year.  According to my records, I watched 89 movies over the past year.  That's not 89 separate titles, as I always do a lot of rewatching.  But I watched 89 movies.  Yay!  Here are the ten that I liked best of the ones I'd never seen before.  As always, I've linked the title to my review if I've done a review of that film already. 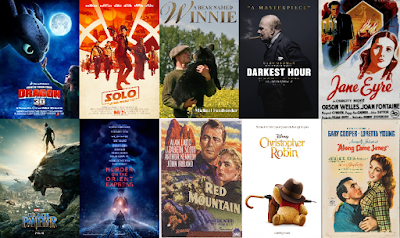 1. How to Train Your Dragon (2010)  A young viking named Hiccup (voiced by Jay Baruchel) defies tradition and saves a dragon instead of trying to kill it.  His newfound knowledge and understanding of dragons ends up saving his village and gaining his father's (voiced by Gerard Butler) respect.  Oh, wow, this movie is every bit as good as everyone says it is.  Possibly better.

2. Solo: A Star Wars Story (2018)  Time and again, all that stands between young street rat Han (Alden Ehrenreich) and doom are his moxie, his street smarts, and his luck.  I happen to love heist movies, and this movie has heist after heist after heist, so it pleases me from just about every angle.

3. A Bear Named Winnie (2004)  The true story of how and why a military veterinarian (Michael Fassbender) brings a Canadian bear to Europe during WWI.  Sweet and lovely movie.

4. Darkest Hour (2017)  Winston Churchill (Gary Oldman) and the rest of Great Britain must decide whether to defy Adolf Hitler or make peace with him and their own consciences.  Fabulous supporting turns by Ben Mendelsohn, Kristin Scott Thomas, and Lily James.  I ran right out and bought a copy of this the day after I saw it at my parents' house.

5. Jane Eyre (1943)  Plain, humble governess Jane (Joan Fontaine) cares for the ward (Margaret O'Brien) of wealthy, unpredictable Mr. Rochester (Orson Welles).  Possibly my favorite Welles performance ever, and so good I had to add a copy to my collection of good adaptations of my favorite novel.

6. Black Panther (2018) T'Challa (Chadwick Boseman) learns what it truly means to be a man, a leader, and a hero.  One of the coolest, most sophisticated MCU movies so far.

7. Murder on the Orient Express (2017) Legendary detective Hercule Poirot (Kenneth Branagh) solves a mystery on a train, and we all enjoy the ride because of how many cool people show up in the various roles.  I really enjoy Branagh as a director, maybe even more than I do his acting, and I'm looking forward to 2020's Death on the Nile (not least because Armie Hammer's supposed to be in it).

8. Red Mountain (1951) Near the end of the American Civil War, a Confederate officer (Alan Ladd) is sent to Colorado to aid General Quantrill, but ends up involved in a murder, a rebellion, and a love triangle.  I need to watch this again so I can review it, because it's a totally different movie than I was expecting, but not in a bad way.

9. Christopher Robin (2018) Adult Christopher Robin (Ewan McGregor), his wife (Hayley Atwell), and their daughter (Bronte Carmichael) gain some much-needed assistance from Christopher Robin's childhood friends, Winnie-the-Pooh and Co.  This is sweet and whimsical and heart-warming, and McGregor is so perfectly cast that I want to hug him.

10. Along Came Jones (1945)  A slow-talking, easy-going cowpoke (Gary Cooper) gets mistaken for a vicious outlaw (Dan Duryea) and falls for the outlaw's girl (Loretta Young).  This is a charming western comedy that amuses me greatly.

What were your favorite movies this year?

Happy New Year!  I'm not a big one for resolutions, but one thing I intend to change in the coming year is how present I am in the blogosphere.  Life has been hectic this year, but I'm working on streamlining it and getting back to things I love, like blogging and reading blogs, and doing less of busybusybusy stuff.  We'll see if that happens.
Posted by Hamlette (Rachel) at 6:30 PM