After posting here about the ten books I read in 2014 and liked best, I thought maybe I should try something similar with movies.  Only trouble is, I don't review every single movie I watch.  But I do record them all in my journal, so relying on that, I've come up with a good list.  I've linked to my reviews if I wrote one.  Unlike what I did for books, I'm listing only movies I'd never seen before. 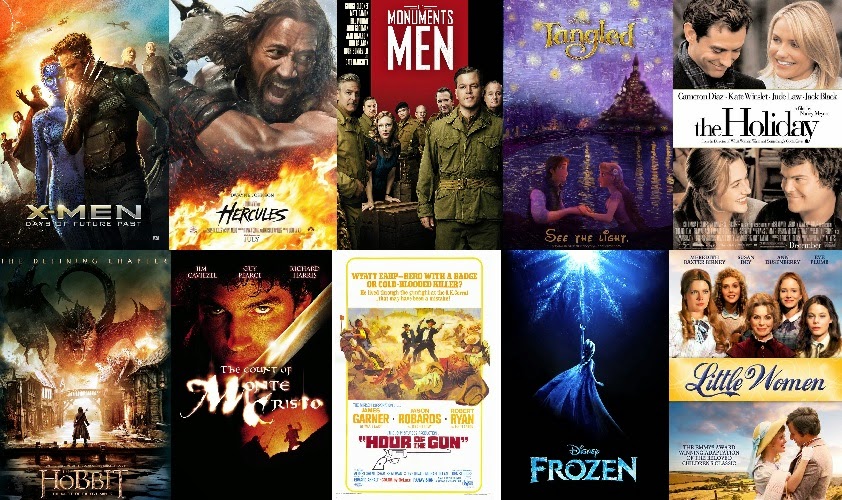 Wolverine (Hugh Jackman) travels to the past to save the future.  My absolute favorite X-Men movie.  Words truly can't describe how deeply I love it.

A bunch of art experts (Matt Damon, George Clooney, etc) try to save art from the Nazis.  A throw-back to the great WWII classics of the '60s.

Rapunzel (Mandy Moore) climbs out of her tower and gets a passing thief (Zachary Levi) help her fulfill her dream of seeing what those floating lanterns are all about.  The first time I watched it, I was ho-hum through the first half, but when it got to the boat scene, I fell in love with it.  Every repeat viewing has confirmed this as a total favorite.

An unhappy LA woman (Cameron Diaz) trades houses with an unhappy British woman (Kate Winslet) for Christmas, and they find happiness and love in their new surroundings.  Did I mention Jude Law?  And Rufus Sewell?  But my favorite part of the whole movie is everything that involves Eli Wallach's sweet, elderly Hollywood writer.

Dwarves, Elves, Men, and hordes of Orcs duke it out in Middle Earth.  Can't wait to see this again!

Edmond Dantes (Jim Caviezel) transforms himself from a simple sailor wrongly convicted of treason into a vengeance-seeking nobleman.  I didn't want to see this ever ever ever, but two friends convinced me I should, and whaddaya know?  I love it!

A gritty exploration of revenge, in which Wyatt Earp (James Garner) hunts down the men who killed his brothers, with Doc Holliday (Jason Robards) riding along.  Definitely the most serious portrayal I've seen of the OK Corral events and their aftermath.  I don't love it as much as Tombstone (1993), but it's by far a better movie.

A really nice, thorough TV miniseries starring the likes of Susan Dey and Dorothy McGuire, with William Shatner making a surprisingly effective Professor Bhaer.  It needs to be more widely known!
Posted by Hamlette (Rachel) at 11:52 AM