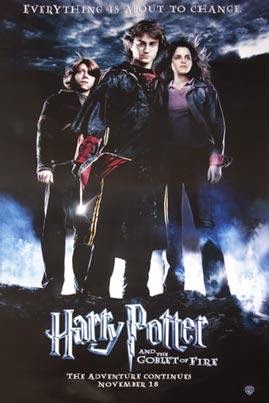 Wow.  This movie is ten years old.  How is that possible?

Anyway, I think that, as far as adapting the source material, this is the best of the Harry Potter movies.  It trims out side plots that are fun but not essential and keeps everything very focused on the Triwizard Tournament and Voldemort's return.  It feels very streamlined to me, and I really like direct, focused story-telling, as I realized when watching Iron Man 2.  The screenplay is by the same guy who did almost all the other Harry Potter movies (Steve Kloves), but this one really pleases me the most.

And this is the only Harry Potter movie I've considered buying the soundtrack for.  It's by Patrick Doyle, who I'm growing fonder and fonder of.  I already own several of his soundtracks (Hamlet, Much Ado About Nothing, Thor) and he's composed for lots of other movies I like (Henry V, Sense and Sensibility, Mrs. Winterbourne, Dead Again).  I listened to several tracks from it over and over and over when I was writing a Combat! fanfic story ("Finders, Keepers") because they're haunting, melancholy, achingly beautiful.  I'd forgotten that, though, and when I watched this with Cowboy, we got to the ending and I was like, "Dana Andrews!  Ioan Gruffudd!  Why are you in my head?"  Because they were who I had guest-starring in that story, and those songs evoke them strongly for me still.

This movie isn't as pretty or as atmospheric as Harry Potter and the Prisoner of Azkaban, but it does have some really gorgeous shots here and there, like this one of Hermione and the portkey at the beginning.

One of the things I like best about this story, both in book and film, is how it starts to show us the wizarding world as a whole, and get us as an audience and Harry as a character to understand just how many lives are imperiled by Voldemort's return.  The Quidditch World Cup does a brilliant job of impressing on us that we can't care about only the kids and professors at Hogwarts.

And of course, the Triwizard Tournament does the same thing, on a more personal scale.  Through it, we and Harry and his friends learn that there are other young wizards and witches out there that they will have to think about, rely on, work against.

One of my favorite things about JK Rowling's writing is her incessant word-play.  I am always so amused by Durmstrang, the name of the Slavic all-boys wizarding school that comes to compete in the tournament.  It clearly refers to the Sturm und Drang art movement from Germany in the late 1700s.  The words literally mean "storm and drive" or "storm and push," but are often translated "storm and stress."  The Sturm und Drang movement sort of spawned the Romantics, and it was all about sweeping, powerful emotions, very anti-Rationalism.  And those Durmstrang boys certainly embody all of that, don't they?  Even their entrances, first their ship rising from the lake by Hogwarts and then the boys stomping and pounding their way up the aisle toward Dumbledore -- very dramatic and big, stormy and pushy.

Okay, so anyway, this story marks the beginning of the real growing up for our heroes, doesn't it.  Until now, they've been kids having fun, learning stuff, getting into a little trouble, solving some mysteries -- nothing very serious.  (Okay, all the stuff about Sirius Black is serious, cuz getting imprisoned for something you didn't do is no joke.)  But here, Harry, Ron, and Hermione have to do some actual growing up, moving into the adult world.  Which is not one of my favorite themes, ever, but somehow I don't mind it much in these books.  Huh.

There are a lot more adult characters in this story, too.  And they're not always keen on helping the kids or on the kids helping them.

Very serious things happen in this movie.  People are hurt, the Quidditch World Cup grounds are ruined.  People die.  This scene here makes me so, so sad:

One of my favorite visual choices for this film is how they costume the Death Eaters.  In the books, Rowling describes them as wearing black hooded robes and masks.  And I always envisioned just a robe with a hood, like a jacket with a hood.  But in the movie, they give them tall pointed hats that instantly make me think of the Klansmen, which obviously is what the Death Eaters behave like, with their fixation on blood purity and all.  But until I saw the movie, I never made that connection.  With one visual, the filmmakers instantly made me get it, which is really great work on their part.

Okay, I quick have to mention David Tennant just because he plays Hamlet in one of my favorite adaptations.  By the time I saw that, I completely couldn't remember him in this movie, other than knowing from imdb.com that he plays Barty Crouch, Jr.  He only gets a few scenes at the beginning and end, but he makes the most of them.  Also, in this moment here, he looks like a '50s hoodlum, with his leather coat's collar flipped up and his hair slicked down.  That made me grin even though he's a bad guy.  It was hard to screencap, though.

So in this movie, we finally get to see Voldemort for real.  Played so slimily by Ralph Fiennes -- oh my, he's just disgusting.  They did a superb job with his look, and of course Fiennes' acting is great.

The finale is filmed so well -- look at how full of interesting stuff this frame is!  We've got Cedric's dead body and the portkey in the foreground, that creepy statue that's been a pivotal focal point throughout the film, Harry and Voldemort locked in a wizarding duel, Death Eaters hanging out on the fringes kinda freaking out over what's happening here -- wow.

All in all, I really like this adaptation.  It's my favorite of the Harry Potter movies, with Prisoner of Azkaban running second and Deathly Hallows -- Part 2 third.  That may change as we continue to slowly watch our way through the series, though.
Posted by Hamlette (Rachel) at 12:04 PM