Happy birthday, dear Vic!  And happy Valentine's Day to everyone else.

Who's my favorite director?  I'm not sure.  Joss Whedon?  John Ford?  Peter Jackson?  Baz Luhrman?  Henry Hathaway?  John Sturges?  Alfred Hitchcock?  Kenneth Branagh?  I don't know.  I don't have one specific director I prefer over all the rest.
So instead I will mention two movies by two of my favorite directors that are not out yet, but that I'm very excited about:
Much Ado About Nothing.  My second-favorite Shakespeare play directed by Joss Whedon?  Yes, please! Particularly when it stars such Whedon alums as Nathan Fillion, Alexis Denisof, Amy Acker, and Sean Maher.
The Guernsey Literary and Potato Peel Pie Society.  I adored the book, and so when I found out they were making a movie, I thought, "Oh no!  What if they ruin it?"  And then I saw that Kenneth Branagh is directing it, and I thought, "Well, okay, he's never screwed anything up, and I quite like several things he's directed, so maybe it'll all be fine."  (A lot will depend on who they cast as Dawsey Adams, though.  I love Dawsey, and if the casting is wrong, it'll ruin the whole thing for me.  So far, only Kate Winslet is listed on imdb.com, set to play the lead.)
Obviously, I'm also excited about Peter Jackson's The Hobbit, but who isn't?  :-D
Posted by Hamlette (Rachel) at 7:56 PM No comments:

Day 27 - A film you wish you had seen in theaters

A film?  Just one?  Not being fortunate enough to live near any sort of revival theater ever in my life thus far, and loving so many classic films, how can I pick one?

I've been fortunate enough to see quite a few films in theaters, including my favorite film of all time, which I'll be blogging about at the end of this meme.  I've seen Gone with the Wind and all six Star Wars films on the big screen, though the original trilogy was just the tinkered-with re-releases in the '90s.  But I love so many classic films... what should I choose?  What one movie above all others would I like to see in the theater?

So I guess I will just choose my second-favorite movie of all time, because while I've seen it maybe 30+ times on VHS and DVD, it came out before I was going to see things in the theaters much.  That movie is The Fugitive (1993). 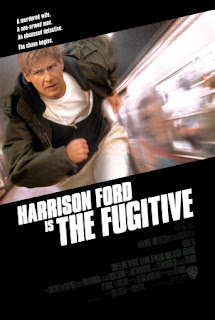 My family watched this movie every Friday night for a month.  At least a month.  For the next year or so, we'd watch it at least once a month.  I had the poster on my bedroom wall for years, and I've even visited the Great Smoky Mountain Railroad in western NC, where the train-bus wreck was filmed on location with real trains and buses.  It cemented my affection for Harrison Ford and gave me a fondness for Chicago as a setting for movies and books and TV shows.


It's a pretty popular movie, so you probably know what it's about -- Dr. Kimble (Harrison Ford) comes home to find his wife (Sela Ward) wife has been murdered by a one-armed man that everyone thinks Dr. Kimble made up.  He's convicted of the murder, but escapes and tries to hunt down the real killer while US Marshals led by Sammy Gerard (Tommy Lee Jones) hunt him.  It hits a lot of themes that are dear to my heart, like false accusations, prison breaks, and unlikely alliances.  And yeah, it must've been cool to see on the big screen, especially the train-and-bus wreck.