So Mom was here last week, Monday through Saturday. As usual, we had lots of fun. We watched the first five eps of season one of Bones, two movies (How to Steal a Million and Shadow of a Doubt -- mmm, Peter O'Toole and Joseph Cotten!), and a couple of NCIS eps. We also baked several batches of cookies (haystacks, peanut butter cookies, and cinnamon ice box cookies) and sent them off in care packages to the Leatherneck and Quikie (Cowboy's best buddy from college). We took Daniel on a walk downtown and toured our library (always a highlight of any visit!). Cowboy and I introduced her to Vietnamese food at a little place not too far from the Crow's Nest. AND on Thursday, Mom babysat Dano so that Cowboy and I could go out to celebrate our anniversary a few weeks late! It was the first time we'd been anywhere without him since he was born, so that was a bit interesting. It felt kinda wrong not to at least be talking about him at first, but we got used to it.

Then on Saturday, Cowboy, Dano, Mom, and I all went to Cambridge to visit Johnnycake and Dimples. It was our first time there, although they've visited us several times. They have a cute apartment (with air conditioners, swoooooon!), and Johnnycake showed us around the Harvard Law campus and other interesting sites near there. We went to three different bookstores, one pretty famous (the Harvard Book Store, one of the largest independently-owned bookstores in the country), one really tiny (the Grolier Poetry Bookshop, which is one of two poetry-only bookstores in the country), and one underground (literally -- a used and rare book store in a shop below street level). We all went to church with Johnnycake and Dimples on Sunday, and ate lunch at a Thai restaurant. Then we played Taboo while Johnnycake welded some chrome back onto The Tank for us. It was a short, but fun, visit. Mom is spending this week with them now, but Cowboy and Dano and I are back home.
Posted by Hamlette (Rachel) at 4:15 PM No comments:

Dano took his first solo steps today! He took two steps from the coffee table to where I was sitting by the computer. Now I'm really in for it!

(Will post tomorrow about the super fun week we had with my mom.)
Posted by Hamlette (Rachel) at 9:26 PM 2 comments:

I've been tagged by Jewels on her Knitsational blog. Here goes!

Waitressing and looking forward to my freshman year at Bethany Lutheran College.

4. Things I would do if I were a millionaire

Invest most of my money so I can just live off the interest, pay off the rest of our car, and buy a house out in the country (preferably in WI or NC).

Email ThisBlogThis!Share to TwitterShare to FacebookShare to Pinterest
Labels: lists

Dano and I are home from our big adventure. We spent the 7th through the 11th with Cowboy's parents, Banana, her Papoose, and Noumenon. Dano got to know his grandparents a little, and he and his cousin got along very nicely. He and I also went to visit ED and spent the night at her sweet little house. Man, do I miss living near her! We had so much fun going to a coffee shop, eating lunch at a drive-in, browsing her library, and watching a couple of movies. Good times.

On Wednesday, the 11th, DKoren picked us up in a rental car, and we drove off to our friend DocB's home for this year's Combat! fanfic Recon, dubbed Reconlan for reasons you will soon learn. We drove about 3 hours that night before stopping.

On Thursday, we drove about seven hours, arriving at DocB's around 4:30pm. The only squaddie to arrive before us was BQ, who had helped DocB decorate the front hall with USO banners and WWII posters. They also lined DocB's driveway with tiny USO flags so we'd have an easier time figuring out which house was hers. Other squaddies arrived throughout the afternoon and evening, including one all the way from Australia! We watched a C! ep in the evening, and when I sacked out at 12:45, the partying was still going strong.

On Friday, the rest of the squaddies arrived, including the Canada contingent. We spent most of the day just hanging out and watching a post-C! Vic Morrow movie called Target Harry that was surprisingly good. Dano adjusted to his new surroundings and started getting to know his new friends.

On Saturday morning, we cleaned up our HQ and got ready for our Guests of Honor, Conlan 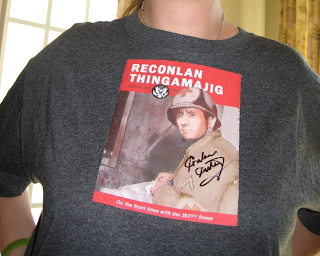 and Betty Carter. Yes, we got to meet the man who played Doc! He and his wife arrived around noon, and after spending an hour or so answering our myriad questions, he had lunch with us. Then he autographed our fanzines and anything else we proferred (such as my official Reconlan t-shirt, which was designed by Dimples)(yes, I was wearing it at the time). We kind of expected he would leave then, but he sat down in the living room again and visited with us until 6pm!!! He and his wife were both gracious and lovely, and I am honored to have met them both.

That evening, we played Combat! Trivial Pursuit and bid on all kinds of C! memorabilia Jen was auctioning off. I won a bunch of awesome photos, including one from my most favoritest ep ever, "Walking Wounded," and a spent shell casing from Franklin Canyon!

On Sunday, we watched a post-C! Rick Jason movie called Eagles Attack at Dawn (which took place entirely at night) and visited a militaria collectibles shop, where all I bought was a Bobbsey Twins book, go figure. We also went to Walmart and pooled our resources to buy gifts for some British troops that DocB befriended while in Iraq.

Quite a few squaddies headed out Sunday evening, but a few (including DKoren, Dano, and I) stuck around until Monday. Then we three drove to the airport and went our separate ways.

I think this was the best Recon yet! Atlanta was great, because I got to meet a lot of my fellow squaddies for the first time. LA was loads of fun, what with meeting Pierre Jalbert and tramping around Franklin canyon. But this one trumped them all, and not just because we spent six hours with Conlan Carter. For four days, I basically lived in a Combat! commune, surrounded by friends and having fun nearly every second of the day. It rocked! And we even managed not to trash DocB's house... much ;-)
Posted by Hamlette (Rachel) at 9:13 PM 4 comments:

Man, am I late in posting this or what? Johnnycake and Dimples were here all weekend, and since then I've been busy preparing for my upcoming trip (to visit my in-laws and then go to this year's Combat! Recon).

Anyway, last week's musical was Gypsy (1962). It added Karl Malden to May's selection of Unexpected Male Musical Stars. It was okay -- I didn't dislike it, but I didn't particularly like it either. It seemed to lack emotion and, I dunno, zing or verve or something. Rosalind Russell was competent in the role of Pushy Stage Mom, Karl Malden filled a Nice Guy role with alternate long suffering and bluster, and Natalie Wood occasionally shone in the title role of Gypsy Rose Lee. I think the best scene was when Gypsy's mother pushed her into her first burlesque appearance -- Natalie played it completely flat, no emotions, like she was sealing herself off from what she was about to do. It seemed really realistic and was probably the most poignant scene in the movie.
Posted by Hamlette (Rachel) at 4:41 PM 1 comment: