I did it! I did it! Woooo! I finished NaNoWriMo 2008 a day early and with several hundred words to spare! I crossed the 50,000-word finish line this afternoon. I finished four whole stories and wrote a goodly chunk of a fifth, can you believe that?

So now I am going to go bake some gingerbread and stop ignoring Cowboy and Dano :-D
Posted by Hamlette (Rachel) at 5:05 PM No comments:

I have finally had roasted chestnuts! They weren't roasted on an open fire, but hey. Cowboy found a recipe online and roasted them in our oven, and we ate them when they were still warm, as if we were in a Sherlock Holmes story or a Christmas song.

I'd like to try some that were roasted over a fire, as they're supposed to get a smoky flavor going on. These were pretty good, though. They smelled just like baked ham, and tasted a little like it too. The only thing I didn't care for was their texture, which was akin to baked potato, and as we all know, I am not so much a fan of potatoes.

But still, I have now had roasted chestnuts, which I happen to think is quite cool.
Posted by Hamlette (Rachel) at 8:09 PM 3 comments:

Note to 007 filmmakers: stop trying to make James Bond into Jason Bourne!!!!! If I wanted to watch a Jason Bourne movie, I would have stayed home and watched one. I go to a Bond movie expecting a sleek, stylish ride in an Aston Martin, not a turbulent jouncing in somebody's old Jeep. I realize the Bourne movies are fantastically successful, but that doesn't give you a reason to copy them -- Casino Royale was fantastically successful too, on its own terms.

WARNING: LOTS OF SPOILAGE BELOW!!! 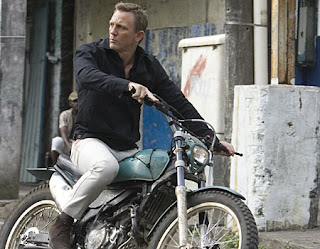 So yeah, I went to see Quantum of Solace yesterday. And it had its fun points, for sure. The Wondrous White Pants made another appearance, to great effect. There was a motorcycle. Daniel Craig is 100% enjoyable as Bond. I like Dame Judi Dench so much as M, I want to adopt her as my snarky great-aunt.

But most of the action sequences were a big disappointment. I know the herky-jerky, in-your-lap camera style is supposed to make us feel like we're in the thick of the fight or car chase, but these were shot so close and cut so quickly that I couldn't tell what was going on a lot of the time, and that's not cool. Even in the second two Bourne movies, which this seemed to be copying, I can still tell what's going on. In Quantum's opening car chase, I could barely tell who was chasing who. And during the fight on the scaffolding, I literally could not tell which guy was Bond and which was the baddie. And that's not just uncool, that's bad directing and editing. Never confuse your audience like that, people! You will only annoy them.

Also, the plot was kinda scattered. I love the tight focus of Casino -- it feels like riding a racehorse through a tunnel. Quantum feels like running a three-legged race on a golf course. It's way shorter than Casino, but feels longer.

And hey! Beating the snot out of people using an everyday object is Jason Bourne's turf! I think the number one thing that bugged me about this movie was the fight where Bond kills the guy with a cuticle scissors. The whole thing, from the guy bursting through the window through the death-by-manicure, just reeked of copying Bourne. Grr.

And I kept wanting the bad guy to be played by Sam Rockwell instead of this Mathieu Amalric guy -- Rockwell could've pulled off the skeezy thing with more fun and zeal.

That said, it's a fun romp, and it served the very important purpose of defunking me out of a seriously cranky mood. And it had the Wondrous White Pants. But it gets two Warheads for dragging in the middle.
Posted by Hamlette (Rachel) at 3:35 PM 2 comments:

I just passed the NaNoWriMo halfway mark! I now have 25,045 words written. Yay me! I hope to celebrate by going to see Quantum of Solace this weekend once Cowboy gets back from his business trip and I'm not a single mommy anymore.

And as if on cue, I hear Dano waking up from his nap. Adios!
Posted by Hamlette (Rachel) at 2:54 PM No comments:

(Many thanks to Noumenon for pointing me to this article!)
Posted by Hamlette (Rachel) at 6:17 PM No comments:

Thanks to all your excellent input both here and via email, I have started a new blog to discuss my craftiness. The literal kind of craftiness, not the sneaky kind I get up to now and then -- I'll still post about that here ;-) Anyway, my new blog is at huggermuggerblog.blogspot.com and you are hereby invited to check it out!

And don't worry, I'll still post about craft projects here now and then.
Posted by Hamlette (Rachel) at 9:28 PM No comments:

Did you know they make peanut butter-filled Oreos now? I guess I'd seen them a few times, but we tried them for the first time this weekend, and they're pretty good! About on par with the mint ones, I'd say. Like the mint ones, the filling isn't as sticky as ordinary Oreos, but other than that, they're grrrreat! They're not as strongly flavored as the minty ones either, just a nice chocolate-and-peanut butter mix.

NaNoWriMo is going really well so far! I've made my word count every day so far, plus a little extra. I'm shooting for 2,000 words a day so I can take Sundays off and do stuff like go to a movie or just take a break.

This past Sunday, I went to the library and saw I Want to Live! (1958), the true story Susan Hayward got her Oscar for. It was quite cool -- I especially dug Simon Oakland as the reporter whose story inspired the screenplay... I'm used to him as the other sergeant in "The Long Way Home" (Combat!). And it was neat to see Theodore Bikel as something other than a Mountain Man or a Russian submarine captain obsessed with American scenery.

And in other news, I'm considering starting another blog. Yes, a third one. Because I'd like to have one to link to from my Huggermugger shop, a blog that deals with crafting and stuff like that. But at the same time, I feel like maybe I should just link to this one, and stop fracturing myself. I already have a seperate writing blog -- would a seperate crafting blog be too much? I like having this blog be mostly for friends and family, just talking about random stuff, and so I don't particularly want to link to it on Huggermugger. Hmm. Any thoughts, anyone?
Posted by Hamlette (Rachel) at 5:28 PM 3 comments: