I went to see Public Enemies today. It was pretty good. Johnny Depp handed in a surprisingly restrained performance -- he was subtle and charming and vicious. Christian Bale had a pretty boring character. Not a lot to do but look determined, though in the scene between him and Dillinger's girlfriend, he was sweet. But still determined. 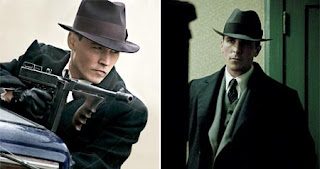 It was nice to see David Wenham in a big movie again. He didn't have as big a role as he did in Australia, but it was a fair-sized one. And Rory Cochrane had a nice role too -- I really only know him from the FBI mini-series The Company, and maybe they decided he looked good in a fedora in that and decided to put him in this, dunno.

Anyway, the storyline was pretty much your standard Movie About Bankrobbers. No huge surprises, good or bad. The dialog was good, sometimes really good, but never fabulous. The sets were great, the costumes rocked, and the music was okay.

But the cinematography? Ugh. Almost entirely handi-cam stuff, very rarely a moment where everything stayed still. And um... the last third or so was shot really oddly. When they got to the shoot-out at the little cabins in the WI woods, all of a sudden, it looked and felt like a teenage movie shot for YouTube. The cameras got extra-shuddery, the lighting went weird and sort of flat, and there was no music or any sort of non-diegetic-sound at all. The picture got grainier, and the whole thing felt very amatuer. It got a little more normal after that sequence, but not entirely. I'm assuming it was supposed to emphasize the way John Dillinger's world was slipping out of his control, but to me it was very off-putting.

So... if you love Johnny Depp, it's worth seeing just for him. But otherwise, I'm not so sure. And I'm afraid it gets three Warheads.

But one cool thing about this movie, for me: I visited a place where part of it was filmed before it came out! That's a first for me. I've been to filming sites for The Fugitive and The Patriot and lots of western stuff like Dr. Quinn, Medicine Woman, but those visits were all long after the fact. But last summer, when I went to visit ED in Oshkosh, they'd just finished filming parts of Public Enemies there a few weeks earlier. She took me around to where some of the exteriors and interiors were done, and in one building, part of a bank interior set for a hold-up scene was still up. I snapped a couple pics: 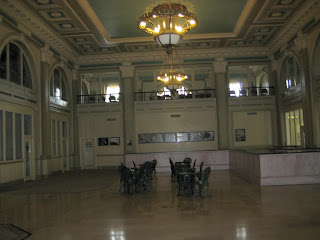 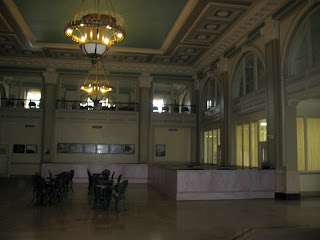 I think they're from the first hold-up in the movie, but I'm not sure. Coulda been the last one. Not a lot of the set left, as you can see.
Posted by Hamlette (Rachel) at 8:44 PM No comments: