I got to hold Papoose today for the first time! Banana brought him over for a little birthday get-together at our place tonight, and I got to carry him around for quite a while. He'll be six weeks old tomorrow, and he's quite darling. I'm not all that fond of babies (human ones, I mean), but Papoose is a sweetie. He's got the Leatherneck's turned-up nose, big bright eyes, chubby little cheeks (now that he's gotten over the Yoda stage), and he's really into clinging onto his Aunt Hamlette's hair ;-) Just kidding--actually, he liked the collar of my shirt better.

We had lots of fun tonight. First Noumenon and Cowboy and I went to a spaghetti supper at the Ruralsburg Fire Dept, then we came back to our Crypt and El Padre, MamaRuth, Banana, and Papoose came over too. We had cake, which I'd baked yesterday, and ice cream. The cake turned out really well--it's a new recipe and made in a bundt pan, so I was a little nervous. You never know about new recipes, after all. And memories of the bundt pan fiasco at ED's a couple months ago made me widgety, even though I've never had one overflow like hers did (because I don't fill them up to the top). But every time I'd made anything in my bundt pan before (actually, it was my Grandma H's pan originally), when I'd flip it upside down, half the cake would stick to the pan and I'd have to scrape it out and stick it back together with frosting. So this time I made sure to grease the pan really well, and it came out perfectly! I didn't even frost it, I just dusted it with powdered sugar and it looked like something you'd buy at a bakery. It's probably the best-looking cake I've ever made! I should have taken a picture of it.

Anyway, we all sat around and talked and ate cake and ice cream and drank the Coke that Banana thoughtfully provided. El Padre gave me two Coke glasses to add to my ever-expanding collection. They're plastic, in that classic Coke glass design, with lids that look like bottle caps, and then plastic bendy straws. Very groovy.
Posted by Rachel Kovaciny at 12:16 AM 3 comments:

Yesterday was my birthday. I'm twenty-six now. Closer to fifty than to zero...although, as The Chameleon charmingly pointed out, I'm also still closer to eighteen than to forty :-D

But birthdays are not about ages. Birthdays are about presents! And did I ever get some sweet ones this year! Lots and lots of books, two pounds of chocolates, three cds...and that's just so far!

Cowboy gave me two of the cds. One of them is the Angel soundtrack. Yes, there is a soundtrack, and yes, it is amazing. I've only stopped listening to it once since I got it (other than to go to work last night), and that was to pop in the other cd he gave me, the Serenity soundtrack. But then Angel went right back in the cd drive...it's a fabulous soundtrack, with some of my favorite cues from the show on it. A couple of the tracks make me choke up, they're so emotionally perfect, so evocative of my Dead Boy and all his sweeping trials and triumphs. How fitting that my Live Boy should have given it to me. What a great hubby you are, Cowboy!

So here is my absolute favorite picture of Angel: 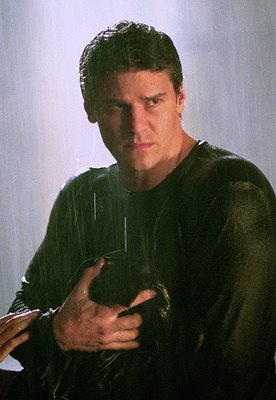 I went to the dentist this morning. I've been having this weird pain going on in my left lower gum below the last two molars, and the gum had this raised hard bump thing on it. I had scar tissue there from when I had my wisdom teeth taken out when I was 18, but over the last few weeks it's gotten bigger and owier. Like, if I chew Apple Jacks on that side and one slides down the teeth just wrong and hits the gum--yikes!

So I finally called up the dentist this morning after we got home from a lovely bike ride. He had an opening at 10am, and I'd called at 9:45, so we zipped over there. Fortunately the dentist is only 8 blocks away :-D

It turns out that my jaw bone is growing out in a weird direction, so the gum tissue is stretched and that's why it hurts. The dentist says this is fairly common, but it usually happens on the inside of the jaw, under the tongue, and usually both sides will grow out in about the same place. He's never seen one grow on the outside of the jaw, by the cheek, before. He said it's not something to worry about, although if it gets bigger and becomes a real problem, I could go to an oral surgeon and have it chipped down, but there's no guarantee it wouldn't grow right back. The only thing is, I can never get dentures. Good thing I take care of my teeth!

So at least it's not cancer or an infection or something that requires a root canal, right?

In other news, my new fanfic story, "Hide and Seek", is posted on the Hot Joe page at Fruit Salad!
Posted by Rachel Kovaciny at 10:51 PM 2 comments: 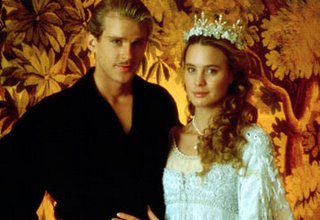 Do you love The Princess Bride? I do. I've loved it since the first time I saw it, around the age of 10 or 11, sitting on the living room floor in my aunt and uncle's log cabin and eating a weird dessert with a crumbly topping that reminded me of the Lightning Sand. My favorite cousin had made the dessert, and he watched the movie with me and Johnnycake even tho he's two years older than me and therefore seven years older than Johnnycake. No wonder he's my favorite cousin, right? We loved the movie so much that a couple years later we named our new puppy 'Westley' after the main character. And I remember that on the drive back from the log cabin after seeing The Princess Bride for the first time, I heard the Supremes song "Stop! In the Name of Love" on the radio for the first time, so every time I hear that song, I think of this movie and weird crumbly-topped dessert.

Anyway, I just watched The Princess Bride on dvd with the commentary by the author and screenwriter William Goldman. It's marvelous! Almost on par with a Joss Whedon commentary, full of funny stories and insights about the writing and a little about the filming and casting. He did tend to go off track a little; there was one point when he was talking about casting his movie Misery where I got impatient and wanted him to get back to talking about this intead. But on the whole, it was a good commentary. I liked how he would suddenly say, "Oh, I love this part!" and stop talking for a little while. Or how he'd chuckle at a line and then half the time say, "I didn't write that, so-and-so threw that in." It seems Billy Crystal ad-libbed a great deal, as you might expect.

This dvd also has commentary by Rob Reiner, but I haven't watched that yet. But if you like this movie and you like commentaries, I totally recommend this one. I think Goldman's most insightful comment was this: "Nothing moves me as much on earth as stupid courage." I totally relate. 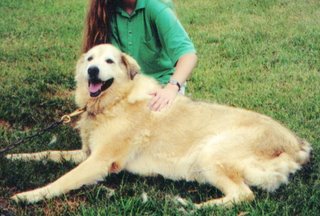 BTW, this is a picture of me with my sweet Westley taken when I was 18 and he was 6. Wasn't he huge? I miss him a lot. (And yeah, I still have that much hair.)
Posted by Rachel Kovaciny at 5:58 AM 6 comments:

Vacation is over :-( Well, mostly. Cowboy is at work tonight, and I go back tomorrow night.

But it was awesome while it lasted! We went back to our college town for a couple days and got to visit with most of our favorite professors and lots of friends. Also, Johnnycake and Dimples go to college there, and so does The Chameleon, so we got to see them. And some of Cowboy's other familial types too. And weirdly enough, this guy named Peter P. that I have known since I was like 2 years old was the desk attendant at our hotel! That made it extra fun :-D

And then on Monday when we were home again, we went to the country's largest indoor waterpark! It's at the Kalahari Resort in the Wisconsin Dells, and it's amazing! I'd actually never been to a waterpark before, and Cowboy had never been to that one, so we had loads of fun. They have this one ride called the Master Blaster that is like a water slide roller coaster! And you know me and my addiction to roller coasters :-D Yeah, I think we went down that one four times. They have six major slides there, and then a really long cool Lazy River, a fortress thingie with water squirters everywhere that you can aim at other people, a wave pool, three or four hot tubs, and some pools for little kids too. Oh, and they had this thing where you could learn to surf, but you had to sign up for lessons a day in advance, so we just got to watch other people learning.

Anyway, I wish vacation wasn't over. How come you have to wait until you're old to be on permanent vacation?
Posted by Rachel Kovaciny at 11:35 PM No comments:

DKoren and I have created our very own Combat! fansite! It's now up and running, and we just introduced it to our fellow C! fans yesterday. We call it Fruit Salad--you know what fruit salad is, right? That's the military slang for the different decorations and medals and ribbons on a soldier's dress uniform. And also, of course, it's a tasty mixture of sweet tidbits that you eat at picnics.

Anyway, all my fanfic is there now, even my Combat!/Angel crossover stories. And DKoren's fanfic is there too, of course. There are several of my stories there that weren't ever posted on Purple Hearts, little short things that are responses to challenges from the fanfic-writers online group. I've also been doing these snarky, goofy reviews of episodes for over a year, so we've got all of my comments on season one there, with season two in the works. Basically, it's a site full of hidden treasure for you to dig up.

Oh yeah, I'm White Queen over there, and DKoren is Thompson Girl. Those are our callsigns in the C! groups...
Posted by Rachel Kovaciny at 4:29 AM No comments:

I love The Daily Show!!! They have put into very funny words all the reasons why I love and adore my 35mm cameras and really don't want to get a digital camera!

(If you're wondering why I'm posting this at 1:22pm when all sane 3rd-shift people would be asleep, it's because we've started our vacation today, and Cowboy and I are converting to dayshifterism for the next week or so.)
Posted by Rachel Kovaciny at 2:22 PM No comments: