Like my new list of favorite western films, the list of my favorite noir films has changed a lot since I first posted one six years ago, all because of one certain actor.

I mean, how was I NOT going to love Alan Ladd when the majority of his films are in my two favorite genres?  It was inevitable.

Anyway.  Here is my current list of ten favorite noir films!  Titles linked to my reviews where applicable. 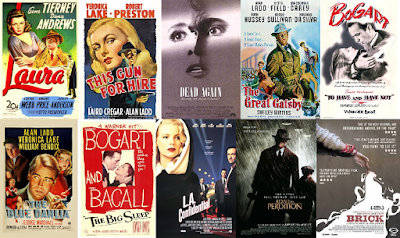 1. Laura (1944) While solving the murder of beautiful Laura Hunt (Gene Tierney), Detective Mark McPherson (Dana Andrews) falls in love with her memory. The most haunting murder mystery of all time.

2. This Gun for Hire (1942) A remorseless killer-for-hire (Alan Ladd) teams up with a singing magician (Veronica Lake) to help the government stop bad guys from selling American military secrets to the enemy. This is the movie that turned Ladd into a star, and it's not hard to see why -- he's riveting.

3. Dead Again (1991) A kindhearted PI (Kenneth Branagh) tries to help an amnesiac (Emma Thompson) remember who she is, only to learn that they may have been intimately linked to each other in a past life.  This is a twisty thriller involving reincarnation and it never fails to thrill me, even though I obviously don't believe reincarnation is a real thing.

4. The Great Gatsby (1949) F. Scott Fitzgerald's classic story gets a film noir twist. A successful gangster (Alan Ladd) buys a new house across the water from an old flame (Betty Field) whose cousin (Macdonald Carey) just happens to be Gatsby's next-door neighbor. I've yet to see another portrayal of Gatsby as haunting and heartfelt as Ladd's.

5. To Have and Have Not (1944) Fisherman Harry Morgan (Humphrey Bogart) gets tangled up with a wandering woman (Lauren Bacall) and a bunch of anti-Nazi French patriots during WWII. Loosely based on characters from the Ernest Hemingway novel by the same title.

6. The Blue Dahlia (1946) A weary veteran (Alan Ladd) returns home and finds his wife (Doris Dowling) is cheating on him with a nightclub owner (Howard da Silva). When she turns up dead, he's the prime suspect. The nightclub owner's wife (Veronica Lake) tries to help him solve the murder. It's the only original screenplay written by my favorite author, Raymond Chandler, and its dialog sizzles delightfully.

7. The Big Sleep (1946) PI Philip Marlowe (Humphrey Bogart) takes a case for a wealthy family with a lot of secrets. Pairs Bogart again with the love of his real life, Lauren Bacall, and is based on the novel by my favorite author, Raymond Chandler.

8. LA Confidential (1997) Three Hollywood cops (Russell Crowe, Kevin Spacey, and Guy Pearce) wrestle with corruption, vice, murder, and conspiracy. One of the most intricately plotted movies ever, with all kinds of disparate strands woven together to form a dazzling whole.

9. Road to Perdition (2002) A hitman (Tom Hanks) takes his son (Tyler Hoechlin) on the run, seeking vengeance for the brutal murder of his wife (Jennifer Jason Leigh) and other son. Brilliant acting from all involved, including Paul Newman, Jude Law, and Daniel Craig.

10. Brick (2005) High school loner Brendan (Joseph Gordon-Levitt) investigates the murder of the girl he may have loved, discovering a teenage underworld in the process. One of the most creative movies I've ever seen.