The very first post I ever did in my Ten Favorites series was a list of westerns.  But that was 'way back in 2013, and my list has changed since then.  I've seen a lot of westerns in the past six years, plus I fell for Alan Ladd, and um... yeah... a lot has changed.  So I'm updating my list!  As of July, 2019, these are my ten favorite western movies.  Like always, the titles are linked to my full reviews of them where applicable. 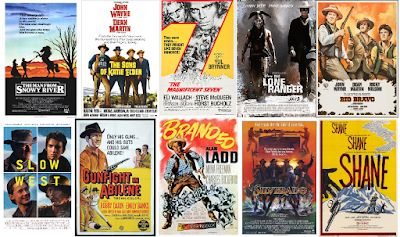 1. The Man from Snowy River (1982)  A young man from the mountains (Tom Burlinson) must clear his name after he's accused of freeing his employer's most valuable horse in retaliation for being told he can't court the boss's daughter (Sigrid Thornton). It's about Australia, not the American West, but oh well.  My favorite movie of all time.

2. The Sons of Katie Elder (1965)  Four brothers (including John Wayne and Dean Martin) reunite at their mother's funeral and work together to find out how their parents lost their ranch. My favorite John Wayne movie.

3. The Magnificent Seven (1960)  Poor Mexican villagers hire seven gunfighters to defend them from the bandit who's been oppressing them for years. Steve McQueen, Yul Brenner, Charles Bronson, James Coburn... oh man, what a cast.  I consider this the finest western ever made.

4. The Lone Ranger (2013)  Lawyer John Reid (Armie Hammer) teams up with the renegade Tonto (Johnny Depp) to find out why Reid's brother and five other Texas Rangers were murdered.  This is kind of a fantasy-western hybrid, more of a tall tale than a realistic story, just fyi.

5. Rio Bravo (1959)  A sheriff (John Wayne), a recovering alcoholic (Dean Martin), an old man (Walter Brennan), and a young gunslinger (Ricky Nelson) fend off a host of bad guys bent on springing a murderer from jail.

6. Slow West (2015)  A bounty hunter (Michael Fassbender) joins a young dreamer (Kodi Smit-McPhee) on a quest to find a lovely girl with a price on her head.  Like The Lone Ranger, this has a unique vibe that feels more like a legend than a real-life story.

7. Gunfight in Abilene (1967)  A Civil War veteran (Bobby Darin) agrees to resume his job as sheriff out of guilt for accidentally killing the brother of the man (Leslie Nielson) who runs Abilene and is all set to marry the veteran's old flame (Emily Banks). My favorite Bobby Darin movie.

8. Branded (1950)  A shady loner (Alan Ladd) poses as a rich rancher's missing son to gain a hefty inheritance, only to discover himself falling in love with the family he's intent on swindling.  My favorite Alan Ladd movie.

9. Silverado (1985)  Four outcasts (Scott Glenn, Kevin Kline, Danny Glover, and Kevin Costner) set out to rid Silverado of the evildoers who sent one of them to prison unjustly, stole another's horse, and debauched another's sister.

10. Shane (1953)  A lonesome gunfighter (Alan Ladd) befriends a farmer (Van Heflin) and his family (Jean Arthur and Brandon de Wilde) and realizes he must sacrifice his newfound peace and comfort to keep them safe.  The book by Jack Schaefer is also amazing.


I had so much fun updating this, I might start going back through my other "Ten Favorites" lists and seeing if other lists have changed as significantly as this has.

This has been one of my contributions to the Legends of Western Cinema Week event that Olivia, Heidi, and I are hosting this week!  Click here for the list of other people's posts and to participate yourself.
Posted by Hamlette (Rachel) at 10:26 AM