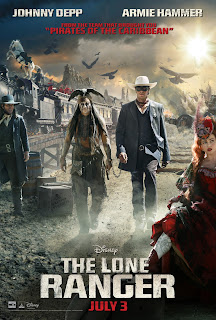 I went to see The Lone Ranger again last night, giving up a couple of hours of sleep to enjoy the heart-pounding, fist-pumping joy it gives me.  Since I described it here a couple of weeks ago, today I'm just going to highlight some of the wonderful nuances that make this movie so enjoyable.

Every time the narrative starts to go off-track, or makes a giant plot leap, or does something that's really quite unrealistic, that little boy is right there with us, going, "Hold it, Tonto!  How'd you get out of prison?"  And aged Tonto gets to shrug or make some semi-sensical reply, and then go on with the story, that glitch having been dealt with now.  Truly brilliant.  I know a lot of people have been annoyed by returning to the little boy and the old Tonto, but I think they would be a lot more annoyed if the story just galloped right over those inconsistencies and plot holes.

This movie is beautiful to watch, too.  Lots of the action was filmed on location in Monument Valley, and while DKoren doesn't like the sort of faded, washed-out look to much of the movie, I find it apropos.  This story is Tonto's memory of things, and as he's very old, his memory is starting to fade, which is reflected in the non-bright colors of his story. 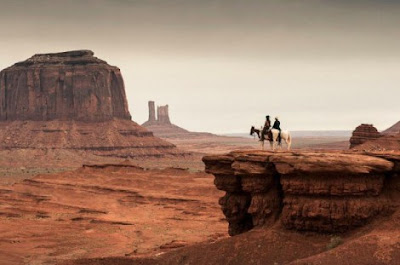 But it's not just the scenery that's lovely.  There are some really unique shots, like having a glass of water on the camera lens, and then dripping a red drug into it from above so we see the redness swirl around as it mixes with the water.  Beautiful shot.  Or when Silver looks down a chimney, it's just the coolest image of his head framed there.  Love it.

There are so many other random touches of whimsy and intelligence that I just love.  Like when Tonto is "trading" with the dead Rangers, and he gives one of them the empty bag of peanuts that the little boy had given him -- a bleeding-through of the narrative frame into the story itself.  Brilliant, and so funny.

I love all the visual details!  Like how the aged Tonto has carved all kinds of little symbols into the inside of the frame of his display case at the carnival.  I can't wait to get this on DVD so I can study them and see how they relate to the rest of the movie.  Or when Tonto uses Cole's signature watch-flip at the end to show Cole he's got all the power now.  The way Red (Helena Bonham Carter) never says outright that she used to be a ballet dancer, but we can infer it from her portrait that she keeps in her office, so we know just how much she lost when Butch Cavendish (William Fichtner) cut off her leg.  Which is also implied, never mentioned -- this movie is so great at not pounding us over the head with everything and respecting the audience's intelligence.

Sadly, from the reviews I've read, it seems that many viewers totally missed a lot of its subtleties.  I guess maybe critics and viewers alike were expecting it to be a kid's movie, and so they didn't trouble themselves with paying attention. 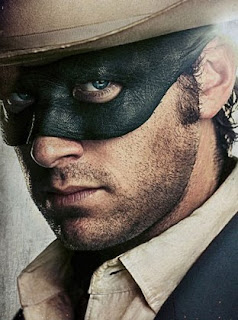 Okay, enough about details -- let's talk about the two lead performances.  First, Armie Hammer as John Reid/The Lone Ranger.  I love how this character sort of parallels Hammer's experiences.  He's from a wealthy family, and when he decided to be an actor, his family told him this was just some silly adolescent dream, and basically disowned him when he decided to pursue acting as a career.  Meanwhile, Hollywood honchos treated him like a dilettante and pretty boy, and it wasn't until his double roles in The Social Network (2010) that he began to be taken seriously.  Compare that to John Reid, who leaves his home to travel east and attend law school.  When he returns, his brother Dan has married John's sweetheart, and everyone treats him as someone who just wants to play cowboy but has no real place in that world.  John Reid must prove himself to everyone, even Tonto. 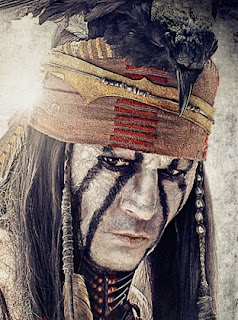 And there are a lot of similarities between Tonto and Johnny Depp too.  I get the sense that Johnny Depp doesn't really belong in Hollywood, even now that he's all rich and famous.  He's quirky; he wears funny hats; he's unpredictable.  And, after a string of less-than-hugely-successful movies, people are kind of not taking him seriously anymore.  He's just some weird dude in funny clothes that makes us laugh.  Compare that to Tonto, who is a self-exiled loner with a funny hat and eccentric ideas.  Because of his cryptic fanaticism, no one takes him seriously.  Just another weird Indian.  Almost everyone in the movie fails to realize how intelligent and resourceful he is.  Even the little boy at the beginning thinks Tonto is some old kook until he takes the time to really listen to him.

Okay, I'm going to stop here.  If you want to read someone else's review that really digs into what works about this movie -- and what doesn't -- go here.
Posted by Hamlette (Rachel) at 6:32 PM