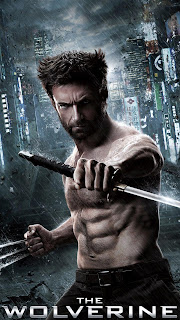 I love Wolverine.  He's one of My Five, the five characters dearest to my heart.  The characters that, more than any others, I identify with, know inside and out, understand so very deeply.  The five that probably inform every character I write in some way or another.  The five I cannot do without.  Some day I'll do a post about them, but for right now, just know that Wolverine is very, very important to me.  (The other four are Saunders, Angel, Sawyer, and Sherlock Holmes, just so you don't spend this whole blog post wondering.)

And yet, the makers of The Wolverine have done just that.

To be very clear, I need to say that Wolverine the character was as wonderful as ever.  And Hugh Jackman was possibly more wonderful than ever.  It's not the fault of either the character or the actor that the story didn't work. 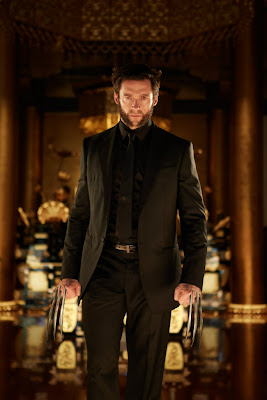 Okay, so quick-and-spoiler-free-if-you've-seen-the-trailers rundown of the basic plot.  Some time after killing Jean Grey to save the world (at the end of 2006's X-Men 3:  The Last Stand), Wolverine is back in his native Canada, living alone in the woods with only a giant bear for company.  Just about where Rogue found him back at the beginning of X-Men (2000), only with more hair.  One thing leads to another, as happens so often in movies, if not in real life, and Wolvie ends up flying to Japan to say goodbye to a man whose life he saved back during WWII.  The man, Yashida, is dying and has sent his granddaughter's best friend Yukio (Rila Fukushima) to fetch Wolverine.  Turns out he has more than good-bye on his mind -- Yashida says he can grant Wolverine the one thing he really wants:  mortality. 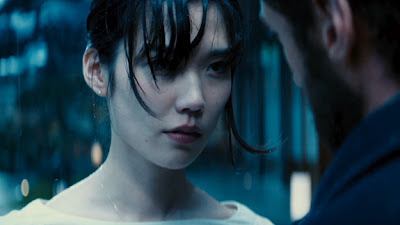 I don't know about you, but as soon as I heard that The Wolverine would take place in Japan, two names came to my mind immediately:  Mariko and the Silver Samurai.  Couldn't possibly delve into Wolverine's time in Japan without involving both of those, right?

Right.  And I really loved Mariko.  She was as sweet and strong as I could hope for.  No quibbles there.

As opposed to Viper (Svetlana Khodchenkova).  She was pointless.  And badly acted, ranging from campy to cringe-inducing.  Did she need to be here?  No.  She could have been replaced with any Doctor/Scientist from pretty much any other movie.  Mostly she just made me think of Poison Ivy (Uma Thurman) from Batman & Robin (1997), and that's really all you need to know right there.

But what really bugged me about this movie involves spoilage about the plot, so Be Ye Warned!  Spoilage below!  If you don't want it, skip reading until after the really yummy picture of Wolvie and Yukio.

The Silver Samurai was a disappointment.  And not just cuz he wasn't the cool dude he is in the comics. Stuff has to change from the comics to the big screen -- I'm fine with that IF it serves the story.  But what disappointed me is how he was sort of just tacked on to make the finale more exciting.  Except, with an adamantium suit, he should have been a lot scarier than he was.  I never really felt like Wolverine was in mortal peril fighting him, and so what could have been a great fight (or at least an exciting one) just was kind of there.  They could have at least taken it the fun route like the fight between Iron Man and Thor in The Avengers, where they're matched evenly enough it's that joy-of-battle sort of thing.

So, what left me feeling dissatisfied and annoyed is the finale.  Up until then, the movie was full of complex character development for Wolverine himself, not to mention lots of juicy emotional changes for him, Yukio, and Mariko.  Are friends or family more reliable?  More important?  Who can you trust?  Can you even trust yourself?  Awesome stuff to delve into, and it was all handled really well.

And then, it's like someone said, "But Wolverine hasn't had to fight any mutants or really exciting bad guys, just lots and lots of thugs -- quick, think up an exciting ending!  Hey, robots are really popular right now -- let's use a robot!"  And instead of making a set that looked distinctly Japanese, lots of windows and doors and nifty sliding panels like in the Yashida house, they give us what looks like a mish-mash of I, Robot and the docking bay in Star Wars:  A New Hope.  Why are there all those catwalks?  No real reason -- they just thought it'd look cool to have people plummeting off things and smashing down onto other things.  Makes no sense at all with the outside of the building.  But we have a big fight between Wolvie and two characters we don't really care about, just cuz we neeeeeeeeeeed that Big Fight At The End.  Dumb. 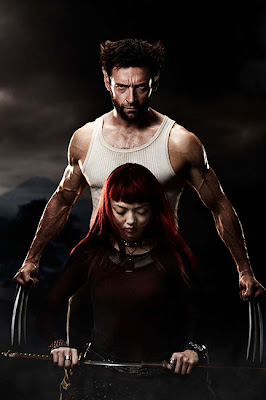 In all honesty, I will buy this movie on DVD.  I will joyfully watch the first 3/4 of it.  Then I will then skip to the very end when Logan gets back on the plane with his "bodyguard," Yukio, the latest in the lovely line of little sisters Wolverine is always acquiring.

Is this movie family friendly?  Um, no.  More bad language than I expect from a Marvel movie, lots of violence, implied sex, innuendo... it earns its PG-13.
Posted by Hamlette (Rachel) at 3:05 PM