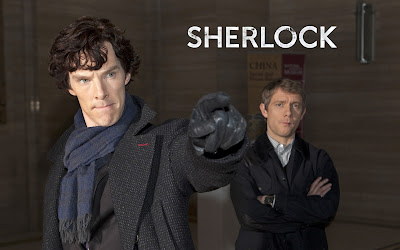 Yup, I'm finally watching (and reviewing) Sherlock!  I know, took me long enough, right?  Actually, I watched "A Study in Pink" last September while on vacation, but never got the chance to watch any other episodes.  So I finally got season one out of the library, after having a hold request on it for several weeks.  Which means I got to rewatch the pilot, and now I get to tell you what I thought of it.

I thought it was brilliant.  Completely brilliant.  Almost flawless.  Not sure I would change anything about it other than the fact that it looks like it was shot on VHS instead of film, but that's a minor quibble and doesn't so much detract from the show as make me scratch my head and wonder what the BBC  is up to.

Benedict Cumberbatch -- could he be any better as Sherlock Holmes?  Tall, gangly, exuding intelligence and a careless charm.  Wow.  I'm especially impressed by the people who were willing to cast him even though he's not at all conventionally handsome.  I find him kind of funny-looking, and yet... I can't keep my eyes off him when he's on screen, he's so mesmerizingly perfect as Holmes. 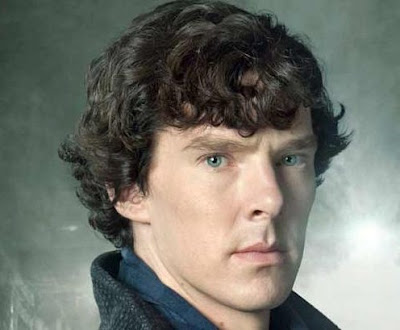 And Martin Freeman as Dr. Watson -- can I please hug him?  Oh, he just needs lots of hugs and the occasional pat on the back or something, doesn't he?  Completely sweet, and at the same time, stalwart.  Exactly what Watson needs to be.  Also, his sweaters and hair are adorable.  Like a fuzzy little puppy who wants to play. 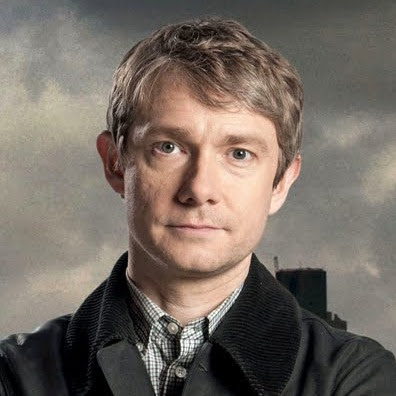 I love how they updated things!  Holmes is a compulsive texter instead of a compulsive telegrammer.  He uses nicotine patches instead of smoking pipe after pipe.  He's had a drug problem in the past, though in this ep he seems to have put it behind him, but knowing Sherlock Holmes as I do, I'm expecting him to get pulled back toward it at some point.  And they keep some things just the same:  sticking his mail to the mantle with a jackknife, doing smelly experiments in their apartment, pretending to take Mrs. Hudson for granted when he clearly values her for putting up with him.  Watson having a war injury in his shoulder and also something going on with his leg.  Well done.  Bravo.

I could go on and on, but I won't because it's past my bedtime and I promised myself I'd get this posted tonight.


So the plot of this one cleverly takes bits from the very first Sherlock Holmes novel, A Study in Scarlet, and weaves them into a new mystery.  It has deaths in abandoned buildings, the letters "rache" scrawled near one victim, and the same profession for the perpetrator (which I won't say here so as to not spoil things for all 2 people in the world who haven't seen this yet, but want to).  It has Dr. Watson meeting Sherlock Holmes through a mutual acquaintance and becoming flatmates, then friends.

My only true nit to pick (and this is spoily, just so you know) is that when Watson is abducted off the street and dragged off to an underground parking garage or whatever to meet a mysterious man who wants to pay him for info about Holmes, the only reason it's played that way is so viewers will assume the mysterious guy is Moriarty, and then it will be heeeeeeelarious when you find out it's really Mycroft.  Works the first time, feels contrived after that.

So.  Yay!  Can't wait to start the next ep tomorrow night! 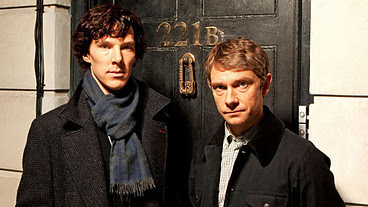