So, I have to admit I didn't like "The Blind Banker" quite as well as "A Study in Pink."  Not sure why -- I think the mystery just intrigued me less.  Also, felt a bit draggy in the middle, though not for long.

But I still enjoyed it immensely.  And realized that, honestly, Sherlock Holmes would be the most impossible friend.  Always knows what you're thinking, where you've been, what you've been doing, who you've been with -- he'd be the world's worst know-it-all.  Even worse as a boyfriend or husband.  But I still love him dearly, whether in this show or the original stories or other incarnations.  There's no one like him. 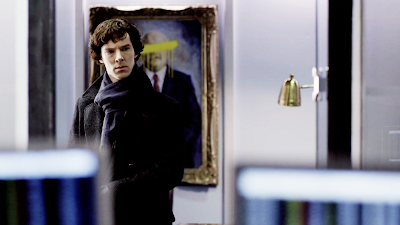 Okay, sorry, didn't mean to get maudlin or introspective there.  Anyway, this ep doesn't resemble any canon story I can recall, other than kind of a bit like "The Dancing Men" with the code/cipher and all.  It's about Chinese smugglers, and also about Watson getting a job and going on a date with a girl named Sarah (Zoe Telford).  A date that Sherlock crashes, which just amuses me to no end.  At the same time, yeah, most impossible friend in the world.  You never know if he's just oblivious, or if he's expecting you to think he's oblivious so he can get away with being kind of a jerk.

There I go again!  This isn't a very coherent review.  I'm sorry.  Been a long Monday.  Also, I keep remembering the scene with Holmes hopping around in the bank figuring out sight lines, and that makes me giggle a lot, and then I forget what I was going to say about the episode.

I give up.  I'll leave you with a reminder that Benedict Cumberbatch can look positively evil if he wants to: 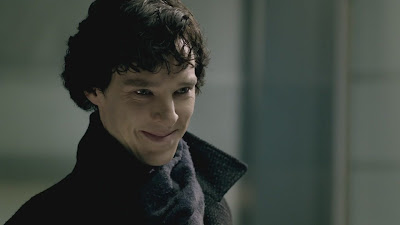 Forgot to mention in the previous review if it was family-friendly.  Um, sorta.  Both it and this have a handful of bad words, some violence and innuendo.  Would clean up easily, I think.
Posted by Hamlette (Rachel) at 10:01 PM