Over the past couple of months, several people have asked if I'd be willing to share the story of how I met my best friend, Deb Koren.  I have four best friends, and I met three of them in fairly conventional ways (4-H group and college), but the friendship between Deb and I has a more unique origin story.  With her permission, I've decided to share it here.

It all began on this train to the little town of Colby.  I'd finally finished earning my law degree and was heading home for the first time in far too long.  And Deb was on that train too, but while I was in a fairly comfortable passenger car, she was manacled and chained up in a cattle car, on her way to face justice...

To tell the truth, it all started one night back in June of 2005.  Cowboy and I worked third shift, and I had the night off, but he was working.  I was bored and decided to search LiveJournal for bloggers with similar interests.  One of the things I searched for was "Vic Morrow."  One of the journals that popped up belonged to Deb, and I started reading post after post after post, leaving her comments all over the place as I discovered more and more interests that we shared.  Combat!, old movies, westerns, John Wayne, writing... the list went on and on and on.

As far as I can tell, this post is where she first commented on my blog.  Her comment is dated June 14, 2005, so we probably first 'met' a day or two before that.

By the end of a week of exchanging blog comments, I was calling her my friend.  We exchanged email addresses when it became obvious that blog comments just weren't good enough.  (Eight years later, we still exchange multiple emails most days.)  For several years, we also had long instant-messenger conversations every evening before I went to work.

About eleven months after we first met online, we met in real person.  Deb flew to WI and spent four or five days with us.  We read each other's NaNoWriMo novels from the previous November.  We watched lots of movies together.  Deb got horribly sick.  Her sister thought she'd been kidnapped.  Good times!

The funniest thing happened during that first visit.  One day, I showed up at her hotel to pick her up, wearing my "The Force is strong in this one" t-shirt.  When she opened the door and saw me, Deb began to laugh and laugh and laugh.  She pulled off her sweatshirt to reveal... the exact same shirt!  Neither of us knew the other owned it, but we both knew the other would get a kick out of it, so we quite randomly wore it on the exact same day.  Thus started a long, long tradition of (purposely) wearing the same t-shirts at the same time, which we've continued on most of our get-togethers.

Yes, get-togethers.  As in, multiple ones.  All told, in the eight years we've known each other, we've gotten together seven times.  I've met her whole family, she's met my whole family and some of my in-laws... it's awesome.  We've seen a bunch of movies together in the theater (we're both nuts about movies, and about many of the same movies), and we've developed a way to watch movies together even when we're on opposite sides of the continent:  we start them going at exactly the same time, then discuss them via instant message as we watch.  It's crazy fun.  Only works for DVD/VHS/digital, though.  BUT we have been known, on occasion, to surreptitiously call each other from a theater while watching a movie just so the other person can hear a bit of dialog that they love.  Can you imagine answering your phone on a bad day and hearing Thor say, "You give up this poisonous dream!  You come home."  I tell you what, I gave up all my poisonous dreams right then and there.

So yeah... that's the story of how Deb and I became best friends, beginning eight years ago and continuing to this day.  I was going to illustrate this with a picture of us together, but I can't seem to find any where we both aren't grinning like total goons, which we tend to do 99% of the time we're together.  So I'll leave you with a shot of our alter-egos: 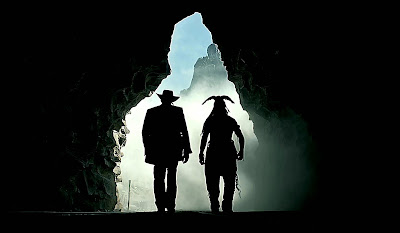 That's totally us.  Except we're closer-matched in height.
Posted by Hamlette (Rachel) at 6:50 PM

Email ThisBlogThis!Share to TwitterShare to FacebookShare to Pinterest
Labels: friends