This is the third -- and final -- episode of Sherlock's first season, and I think it's my favorite so far.  Partly, that's because it really suited the longer format.  I think "The Blind Banker" suffered from being an hour-long plot that got stretched out, but this one filled every minute with important stuff.

The backbone of this episode is based on the canon story "The Bruce Partington Plans," which is not a huge favorite of mine, but I like it fine.  But then it threw in a very twisty ticking-time-bomb thing.  And then another.  And another.  And kept upping the stakes and cranking up the tension until my heart was actually thudding in my chest by the end.  Really well paced, scripted, acted, etc.

Random note -- I totally dig Rupert Graves as Detective Inspector Lestrade.  He's competent, but not brilliant, and so very annoyed at how he really does need Holmes' help.  I keep feeling like I've seen him somewhere, but all I can dig up is that he played Freddy Honeychurch in the 1985 version of A Room with a View, which I saw about 15 years ago and barely remember a thing about, so it's not that.  Huh.


(SPOILERS AHEAD.  Skip to below the picture of Holmes looking pensive if you don't want them.) 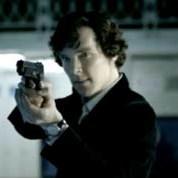 And we got to meet Moriarty!  Oh my.  He's completely off-the-wall wacky, which makes him really scary in his unpredictability.  I was totally not expecting him to crop up already -- I thought they'd have him lurk about until the second season.  And goodness, can Andrew Scott ever chew the scenery!  By the time the episode ended, I was surprised the building was still standing after how much he'd gnawed on it.


Also, holy horrifying cliffhanger, Batman!  I won't get to start season 2 for a couple of weeks -- woe is me! 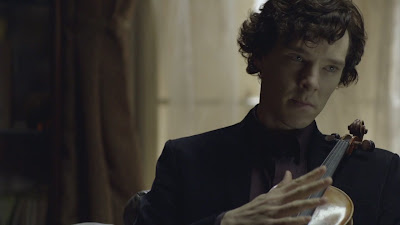 So.  Yeah.  Wow.  Great episode, can't wait for more.  Totally putting this on my Christmas wish list!
Posted by Hamlette (Rachel) at 7:59 PM