I didn't realize Eli Wallach was nearly a hundred years old!  He was just making movies as of 4 years ago, and I guess I thought he was in his 80s or something.  His death on Tuesday shocked me so much.  I've only seen a handful of his films, but he plays my favorite film villain ever, and I absolutely loved his autobiography, The Good, the Bad, and Me.
Posted by Hamlette (Rachel) at 10:48 PM 17 comments:

This entire post is spoilage.  (EDIT:  Both my husband and my best friend say it's not all that spoily.  Mostly I just discuss my emotions about the film.)  Stop here and go see the movie if you at all love these characters and this series.  Do not scroll down below the pictures of Wolverine unless you want spoilage.  I mean it.

I am so, so, so incredibly happy.  Euphoric, really.  Filled with joy.  I feel like light and love could come shooting out of my fingertips if I wanted.  Thank you, thank you so amazingly much to the makers of this movie.  You have given me such an unexpected and wonderful gift.  You even fixed a bunch of the issues I had with X-Men:  First Class.  And James McAvoy learned to act, or remembered how, or something!  Maybe Hugh Jackman just makes everyone better?  I don't know, but McAvoy's Charles Xavier was anything but bland and boring this time.

I don't think I can be coherent here.  So I'm just going to repeat that I am beyond happy, thanks to this movie.  I will gladly sit through the first 2 hours and 5 minutes of pain and torment and fear and worry again to get to the final few minutes of giddy joy.  Hugs all around!

This song is exactly how I feel tonight:

I've got a new story posted!  You can read it here, on the Combat! fan site I co-run with my best friend.  It's called "The Beaten Way of Friendship," and it's about how Grady Long befriends Saunders whether Saunders wants to be friends or not.  In some ways, it's a follow-up to an earlier story of mine, "The Better Part of Valor" (found here).  And yes, both story titles come from a certain Shakespeare play.

Isn't it odd how some stories come into being?  Both of these (and another that is as-yet unfinished because it has issues) stem from a single incident.  Five years ago, I unexpectedly ran into a guy who I had had a thing for ten years earlier.  We had gone on one quasi-date -- it was never an actual relationship.  But I had spent a whole summer writing poetry about this guy (the summer before I met Cowboy, I might add), and even wrote a completely unrelated Combat! story (here) as a result of the guy eventually dating someone else.  Then I saw him one night at Walmart, and I'm not sure he even recognized me (it'd been ten years, after all), but it was just the weirdest thing, to me.

I went home and started writing a fanfic story in which Sergeant Saunders ran into a nurse he'd once been in a relationship with, years before.  And then I wrote the story of how he met that nurse in the first place, a story I decided to use to explain why Saunders behaves a lot differently in the first few episodes than in the later ones.

This is something we fans have discussed over and over:  why is Saunders kind of jokey and light-hearted at the beginning of the series, but later on, he's as serious as possible.  My own theory has always been that the change really happens during an episode called "Far from the Brave."  Saunders spends the whole episode grieving over a guy from his squad named Grady Long.  It's an amazing and powerful episode, and you can watch it on YouTube here.  The thing is, Grady Long was not a series regular.  He's only in that one episode, only for about 3 minutes, and has zero dialog.  We don't even know who played him -- he's totally uncredited.  Not a lot to work with there, for a fanfic writer, or so you'd think.

And yet, eight years ago, my friend Deb Koren and I co-wrote a whole story involving Grady Long.  We watched "Far from the Brave" over and over, finding clues about how the other characters might have related to him, and what kind of person he must have been.  Our story, "Fools of Fortune" (here) is one of my absolute favorites.

Ever since then, I've been tinkering with the idea of writing a story about how Saunders and Grady Long met.  I started two stories, but abandoned them because they felt wrong.  However, when writing all these stories about how Saunders grew and changed, I realized Grady Long's story belonged with them.  And so I wrote the first draft of this story.  That was four years ago, after I'd finished the story of how Saunders and the nurse met, which became "The Better Part of Valor" (here).  That first story idea, of them meeting again after a long time, is still languishing unfinished.  One of these days, maybe I'll fix it up, now that this one is done.

The 70th Anniversary of the D-Day Invasion

Seventy years ago this morning, thousands upon thousands of Allied soldiers, sailors, and airmen attacked the Nazi defenses on the beaches of Normandy.  They called it Operation Overlord, and no one involved was certain it could succeed.  The weather had been lousy.  The Allied track record with beach landings was far from stellar.  And no one was sure if the Axis powers knew where the Allies were planning to land, or if they'd been fooled by all the misinformation the Allies had been sending their way.

Seventy years later, of course, we know they succeeded.  Despite the bad weather, despite snags like one entire landing force hitting the wrong beach, despite terrifyingly high casualties at other beaches, the Allies were not swept back out to sea by the Nazis.  They landed, they stayed, they fought their way inland, and the war... was not won that day.  But the proverbial Shakespearean worm had turned that day, and victory in the European Theater of Operations was not long in coming.

This might be weird to say, but I'm very fond of the D-Day invasion.  I love learning about it, and one of my great dreams is to someday visit the five beaches where the Allies landed.  The best book I've read about the invasion as a whole is still The Longest Day by Cornelius Ryan, and I love the movie that's based on it.  I also love a much less well-known movie called D-Day:  The Sixth of June which follows three people whose lives are caught up in the preparation for the invasion.  I used to watch one or the other every year on the anniversary, though lately I haven't had time to watch either one, and usually make do with the pilot episode of Combat!, "A Day in June," which also revolves around the invasion. 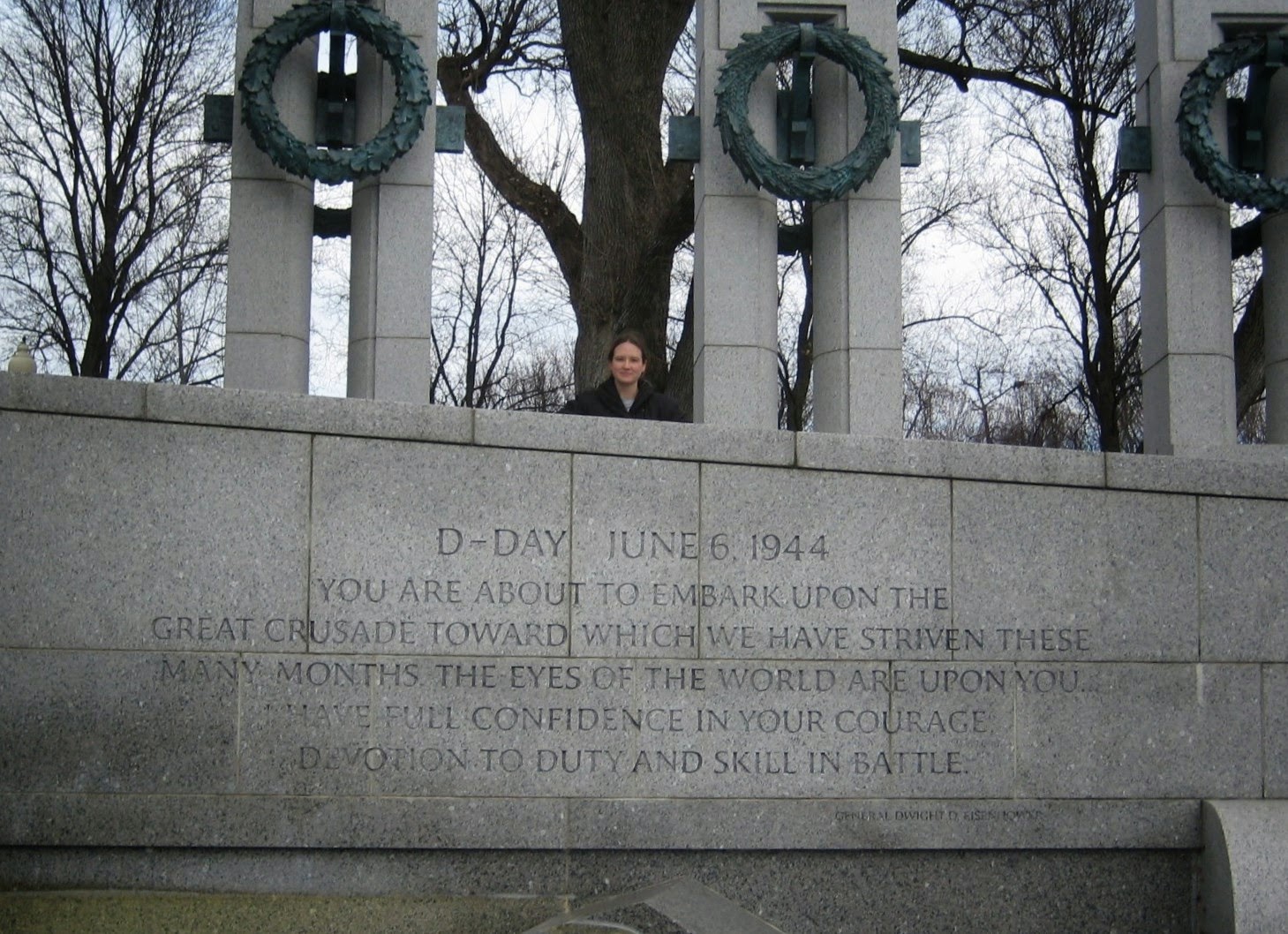 This is me at the WWII memorial in Washington, DC a few years ago, standing above the section that honors those who participated in D-Day.  I couldn't physically be present there today, or on the beaches of Normandy, to honor those who fought there, both those who lived and those who died.  But I honor them by remembering their sacrifice, their courage, their achievements.  I hope you do too.
Posted by Hamlette (Rachel) at 11:50 PM 7 comments:

And Just When Rabbit Began to Think He Would Never Be Able to Use His Front Door Again...

Being a freelance writer like I am is kind of a weird way to live, creatively.  I mean, I do a lot of other creative things that people can see the product of right away.  I cook a meal, and there it is, you can eat it.  I bake cookies, and you can devour one.  I crochet a baby blanket, and you can see it as it grows under my fingers.  I write a story or a novel or an article, and you don't see anything until it's finished and revised, and revised again, and put somewhere where I can share it, like a website or a magazine issue.

Which means when I'm working on writing projects (my sixth novel and two fanfic stories at the moment), there's a lot of time where no one sees that I've got anything going on.  And then people ask me if I'm "still writing" and I'm like, "Yeah, I am."  And then comes the, "Oh, good!  What have you written lately?" question, and I'm more like, "Um... well... wrote a fanfiction story that's up on the website I co-run..."

So yeah, this post is me saying, "Lookee!  I really am writing stuff still!"  In fact, I've just had an article published in the May/June issue of an online magazine called Femnista.

I've been reading the magazine for about a year, following links from various blogs I read.  And the editor-in-chief, Charity, put out a call a couple months ago for new writers because some of her writers have moved on and she needed fresh voices.  So... now I'm writing for an online magazine!  And not just any magazine, but one aimed at nerdly Christian women -- could it be a more perfect fit?  I think not!

In other words, go read the new issue here!  My article is about Martin and Katie Luther, and how their marriage was an important part of the Reformation.