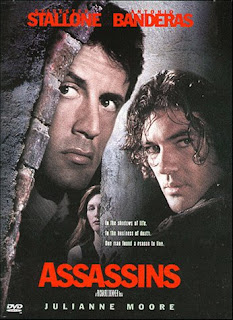 I'm going to go with Assassins (1995).  It's probably not the most underrated film ever, but it's one I like that a lot of people dismiss as lame.  Unlike many of Sly's mid-90s movies, it's not particularly cheesy or clunky -- instead, it's a slick, character-driven action movie.  It's no Bourne Identity, true, but it's fun in a non-deep way.

Assassins stars Sylvester Stallone, Julianne Moore, and Antonio Banderas.  I'm fond of all three of those actors, so the cast alone pretty well ensures I'd enjoy the movie.  Throw in some guns, a hint of romance, and some nice cat-and-mouse action, and I'm hooked.  The plot revolves around Robert Rath (Stallone), the best assassin-for-hire in the business.  Another assassin, Miguel Bain (Banderas), wants to take down Rath and assume his spot at the top of the list.  He's trying to kill Electra (Moore), a prettier-than-most computer geek who does freelance surveillance work and loves her cat.  Rath stops Bain from killing Electra, and the two of them go on the run as he tries to figure out how to take down Bain.

Sure, the character names are dorky.  Sure, it's a little hard to worry that Stallone could ever be bested at anything, even by the scenery-chewing Banderas.  Assassins is a fun ride -- you can see all three stars are enjoying themselves, and it's hard not to enjoy things right along with them.

I think what I like best about this movie is how it manages to dodge so many cliches.  Bain and Rath spar with words and wits, not fists.  Rath is a nice assassin... to a point.  Electra creepily keeps tabs on all the other people in her apartment building... and takes a motherly interest in their mundane lives.  Bain isn't just a kooky guy trying to take down the top dog... he's actually good at being an assassin, arguably as good as Rath.  And Rath and Electra don't end up in bed together -- in fact, one of my favorite scenes involves the two of them sharing a hotel room; Rath gallantly goes to sleep on the floor without a fuss.

So, while Assassins isn't cinematic genius, it's also not a clunker.  Anyway, I enjoy it. 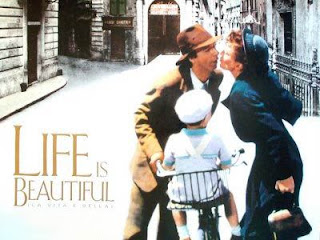 Well, if we're not counting British movies, but only movies in a foreign language, then it's Life is Beautiful (1997).

In case you've never heard of this film, it's about a Jewish Italian who uses his wit and quirky humor to woo the love of his life ("Buon giorno, Principessa!"), then uses those same resources to help his son survive life in a Nazi concentration camp.  It's an amazing story, one that never fails to move me to both laughter and tears.


I first saw Life is Beautiful while on tour with my college choir in May of 2000.  The various choir members were being housed by members of the congregation where we'd done a concert.  My friend Pebbles and I stayed with a young single mom and her two little boys, who were maybe seven and nine.  Certainly under ten.  The mom stopped on the way to her home to rent the video, and we watched it with her and her kids during supper.  Although the movie was in Italian with English subtitles, those two little boys were enthralled -- their mom said they had seen it several times and reacted the same way every time.  They were as wonderful to watch as the movie.

I can't watch Life is Beautiful very often -- it's too poignant.  Like a rich fudge or port wine, it's better as a once-in-a-great-while treat.
Posted by Hamlette (Rachel) at 8:05 PM No comments:

As usual, when I finish NaNoWriMo (yes, I won; no, my novel's not finished), I have taken a small break from the computer.  Okay, a two-week break.  But I'm getting back into my usual routines, and I think I'm ready to begin on my next blog meme.  Which is all about movies.  Yippee!  Here's the lineup of topics:

Yes, DKoren did this on Sidewalk Crossings.  Her answers are here :-)
Posted by Hamlette (Rachel) at 7:57 PM 2 comments:

As in, the one that makes me saddest?  Hmm.  Probably Grady Long.

This is the part where most of you say, "Who?"  And justifiably so, because he's not a regular on any show.  I don't even know who played him, because his only appearance is so brief, it's uncredited. 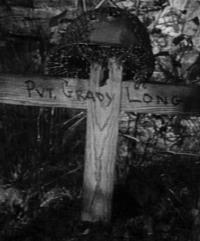 Grady Long is the soldier who dies at the beginning of "Far From the Brave," one of my favorite episodes of (you guessed it) Combat!  Grady Long was never in any previous episodes, and he's only in about three minutes of that one.  We never see his face clearly.  He has no lines.  All he does is walk up a hill, firing a B.A.R. at an enemy machine gun nest, and get killed in the process. 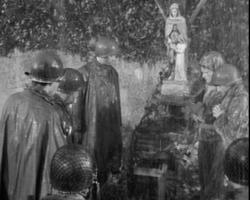 But the rest of the episode revolves around him, around his squadmates processing his death, which has sent Saunders -- yes, Saunders! -- reeling.  Saunders, who has emotional armor six inches thick, is so affected by Grady Long's death that he withdraws within himself so deeply it seems for a while he may never come out again.  And, in a sense, he doesn't.  In the eps following "Far From the Brave," Saunders is a different character from the one before.  He's more serious, he's more focused, and he's more empathetic than he was previously.  I don't know if this was intentional on the part of the writers and directors, if it was a conscious choice Vic Morrow made, or if it happened organically, but the difference is there whatever the reason.

Fans disagree a lot about Grady Long.  How long he and Saunders had known each other, what sort of man he was -- it's all very debatable because none of that is established canonically.  I myself have written and co-written several stories involving him, and I'm currently revising a story that's my take on how he and Saunders met.

But why is Grady's death the one that makes me saddest?  Because of how sad it makes my beloved Saunders, of course.

Here ends the TV meme.  Next up:  movies!

And doggone if this post hasn't made me want to finish revising that fanfic story!
Posted by Hamlette (Rachel) at 2:39 PM No comments: