I can't open the bags inside cereal boxes. Either I yank and yank on them until they burst apart and spill cereal all over the kitchen, or else I never get them open and have to resort to using scissors.

The thing is, it wasn't always like this! I distinctly remember opening many a bag of cereal when I was in high school. Obviously, it's a skill I unlearned during college.

I just made my first sale on Huggermugger! This afternoon I listed a set of three tiny crocheted snowflakes, and like an hour later, someone bought them! Wooooooo! I'm so excited about this, can you tell? I only started my shop 18 days ago, and already I've sold an item :-D And the money I made covers the yarn I bought on Saturday.

That's actually my main aim for my store: to make my crafting hobby pay for itself. If I can keep my restless fingers stocked with crafting supplies, then I'll feel successful. If I make a little extra spending money on the side, then that's bonus.

Oh, and in case you haven't noticed, if you look at the left column here, under my profile, you'll see a little advertisement with my shop. It shows the four most recent things I've listed, so it'll change somewhat almost every day.

And in other news... only four more days of freedom before Nanomadness descends!
Posted by Hamlette (Rachel) at 7:09 PM 2 comments:

Yes, I signed up to do NaNoWriMo for the fourth year. I'm signed in as Hamlette as usual, and you can view my personal page here.

As you can see, if you visit my page, I'm doing fanfic this year. It's not strictly a novel, but instead a collection of short stories in which Sgt. Saunders tends to save the day. Which is why I'm calling the collection "Saunders Saves the Day," since it's nice to have a title to put on my the Nano profile.

I'm doing fanfic this year for a couple of reasons. One, I still haven't finished Salem, the novel I started for Nano last year. And two, I have a whole bunch of Combat! ideas bopping around in my brain, and this will be a great way to get several of them down on paper.

Actually, I had planned on skipping Nano entirely this year, but I've become something of an addict to this month of write-your-fingertips-off madness. Daniel is still taking at least two hours of naps a day, and that should be enough time for me to get my wordcount in. I just won't be able to do little chores like sweeping the floors or putting away laundry unless I've made my wordcount for the day already. Or at least, that's my plan!

Get Your Cyborg Name

Do you ever wonder what your life would be like if just one thing in your past had turned out differently?

Last night, we stopped at the Walmart where I worked as a cashier between my freshman and sophomore, and sophomore and junior years of college. It was about 8:30 and the store was fairly empty, so when Dad and Dano and I got up to the registers, most of them had short lines. He chose the shortest, and to my sudden flummoxation, who should be the cashier at that line but a guy I was truly, madly, deeply infatuated with my first summer there: my Jedi Knight.

I had never expected to see him again. That was nine years ago! No way would he still be working at that Walmart, right? By now, he should have a great job writing music for cartoons, or at least be in Walmart management. But there he was, still cashiering. And my brain said, "EEEEEEEEEEEEEEEEEEEEEEEEP!" and crashed for about three seconds. To avoid talking to him, I picked Dano up from the cart so Dad would have to do all the interacting with the Jedi Knight, since a) my brain still wasn't all systems go, b) he probably didn't remember me anyway, and c) I suddenly felt really guilty that I have this awesome life now and he's still working there.

And then I began to wonder. What if he and I had gotten together that summer? Would I have gotten my AA from Bethany and then gone somewhere in NC for my BA? Possibly to App State, where he was going part-time? What if we'd gotten married? Would we both be working at Walmart still, maybe on opposite shifts so our kids wouldn't have to go to daycare? Or would his life have turned out differently too?

Totally pointless speculation, I know. And it made me realize just how great my life is. Sure, I live in a tiny apartment in the middle of a city, but I have a wonderful husband with a cool job, a beautiful and talented baby, and a writing career that's not exactly stagnating. Yay me!

But I think I should hire my Jedi Knight to be my writing muse, because I got not one but two new story ideas from this encounter. And nine years ago, he inspired dozens of poems (some of them pretty good!) and a fanfic story that I'm still really fond of. Weird, huh?
Posted by Hamlette (Rachel) at 11:21 AM No comments: 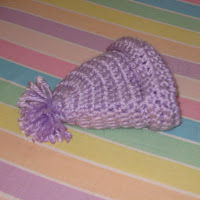 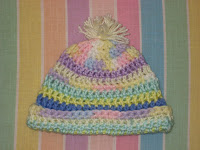 I am starting my own online craft shop! I call it Huggermugger, which is an archaic word from Shakespeare's time (it's used in Hamlet, natch) that means, among other things, "jumble." Since I will be selling a jumble of different kinds of items, I thought the name fit. My shop is hosted on Etsy.com, just like Jewels' store Knitsational. I only have a few things up right now, a bunch of these cute crocheted baby hats. Once I get home from NC later this month, I'll be adding more things, so stay tuned here and there! If you want to give handcrafted gifts for Christmas but don't have time to make them yourself, remember my shop, will ya?
Posted by Hamlette (Rachel) at 2:28 PM No comments:

If you ever want to take the ferry to Ellis Island and the Statue of Liberty, but you forgot to leave your pocket knife at home, there is a nice street vendor selling hats and t-shirts right outside the line for the ferry who will hold onto your knife for you for $10. I know, because we went there this weekend with Johnnycake and Dimples and a bunch of Cowboy's coworkers, and I forgot to leave my Swiss Army knife at home. The one Dad got me for my Confirmation. It was one of those hectic mornings, where Dano didn't wake up as early as normal, so I had to wake him up and then he was cranky, plus there were two extra people using the bathroom, etc. And I forgot to leave my pocket knife at home, even though Cowboy reminded me. We also forgot to bring along the water bottles we'd put in the fridge, or Cowboy's backpack to carry stuff. It was one of those mornings.

But other than me spending the whole time on the islands with half my mind worrying that I'd lost my Swiss Army knife for good, we had a lovely time. We all got to go up the base of the Statue of Liberty, we took a tour at Ellis Island, and we got to spend time with Johnnycake and Dimples, which is always pleasant. And when we got back to the mainland, the guy gave me back my knife! I was so happy, I tipped him $5. So all's well that ends well, as Ma Ingalls says in the Little House books.
Posted by Hamlette (Rachel) at 12:21 PM 2 comments: