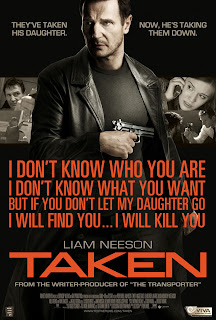 Also, they stole their tagline from the Harrison Ford movie Frantic (1988), which had "They've taken his wife.  Now he's taking action."  Which was also set in Paris, IIRC.  Hmm.

Okay, so yeah, the plot of this is that ex-CIA agent Bryan (Liam Neeson) has an ex-wife (Famke Janssen) and a pretty daughter named Kim (Maggie Grace).  Kim goes to Paris, gets taken by bad guys, and Bryan goes to rescue her.  Lots of violence ensues.

The most interesting part of the movie, for me, is how well the writers utilized the classic "quest myth" structure.  (This is totally spoily, just so you know.  Skip this paragraph if you want to avoid the spoilage.)  We first see our hero in his home environment so we see what he has to lose and/or gain.  Then he gets the call to action, which in this case is a literal phone call from his about-to-be-kidnapped daughter.  He calls on a magical helper, a fellow agent, to help him out before he sets off.  He flies to Paris, entering a mystical woods of unknown surroundings.  A frenemy there serves as the threshold guardian, warning him to turn back and go home.  Bryan ignores him and heroically goes after his prize/daughter, overcoming all obstacles the villains throw at him.  He enters the lion's den and gets captured, and almost has a symbolic death and rebirth, though not quite.  He confronts the villain there, but learns of another villain, so has to enter another lion's den and confront the other villain.  And then he gains his prize/daughter.  We end with him returning the prize to his usual world, where he is welcomed and praised for his efforts and successes.  About the only things he doesn't have that could get crammed into this are a sidekick and a mentor.  He even meets up with a lot of the female archetypes, such as woman-as-whore and woman-as-mother and woman-as-virgin.

It was neat to see Maggie Grace in something other than Lost, and Famke Janssen's character was kind of like a less-loving version of the mom she played in Don't Say a Word (2001), which also involved a kidnapped daughter.  Hmm. 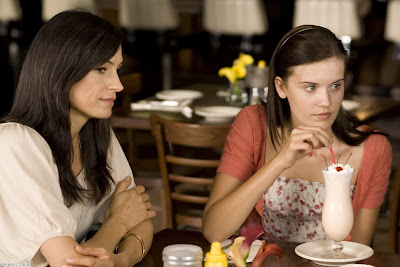 If you want to know more about all this "quest myth" mumbo jumbo I'm rambling about, I suggest reading The Key:  How to Write Damn Good Fiction Using the Power of Myth by James N. Frey or The Hero with a Thousand Faces by Joseph Campbell.  They will expand your mind.  In a good way.  The former is technically a how-to-write book for writers, but it can be fascinating to non-writers too.  The latter is really long and I haven't managed to finish it yet, though I need to.

Is this movie family friendly?  No.
Posted by Hamlette (Rachel) at 12:39 PM