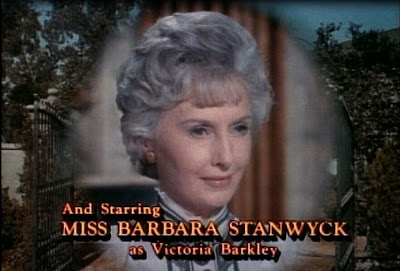 I was ten or eleven the first time I saw Barbara Stanwyck in anything.  I almost wrote "Miss Barbara Stanwyck," because that's how I always, always always think of her.  Because that's how she was billed on the TV show The Big Valley (1965-1969), which is where I first saw her.  In fact, it wasn't until I was in my mid-twenties that I managed to see her in something else.  But oh, what an impression she made on me in the dozen or so rerun episodes I saw as a kid!  Her character, Victoria Barkley, was unlike any other female character I had encountered before.  She was intelligent, strong-willed, courageous, compassionate, and both respected and loved by those who knew her.  I grew up watching old westerns, both those made for the big screen as well as the small, and if you watch westerns at all, you know that they're mostly about the guys.  Girls are usually there just to be the love interest or to get in trouble so the guys have someone to rescue.  Not universally true, of course, but it felt true to a pre-pubescent me.  Sometimes it still feels true today, and not just in the western genre.  But I digress.

From the first episode I saw of The Big Valley, I knew two things:  I was in love with Heath, and I wanted to be just like Victoria.  Twenty-some years later, I'm still in love with Heath, and I still want to be like Victoria.  Season one and half of season two are available on DVD now, usually pretty reasonably, and you can watch season one for free here on hulu.com.  I definitely recommend trying this show out if you love Barbara Stanwyck or old western shows.  It does not disappoint, especially in its first season. 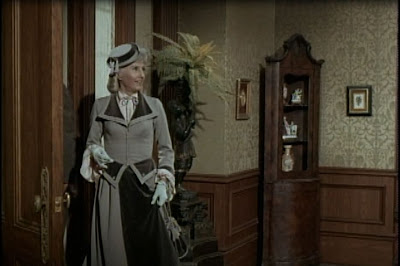 So what makes Victoria Barkley so special?  I'm going to illustrate just what kind of a gutsy lady she is by telling you the basic story of the pilot episode, "Palms of Glory."  (But I won't spoil all the plot, just part of it.  I promise!)  I could talk about any number of episodes, ones that feature her more prominently, but this one really sets the stage for her character, so I'll use it.

Victoria Barkley is a widow.  She runs a very large ranch in California, near Stockton, with the aid of her four adult children:  Jarrod (Richard Long), Nick (Peter Breck), Audra (Linda Evans), and Eugene (Charles Briles).  (I realize that "adult children" is an oxymoron, but boy howdy, I can't figure out any other way to say that.)  Into their happy, affluent world rides a young man named Heath (Lee Majors)(swoon) who claims that he is her late husband Tom's illegitimate son.


Upon hearing this claim, Jarrod and Nick adamantly declare that Heath is a fraud.  No way did their daddy sire some woods colt twenty years ago!  And if by some chance he did, he definitely wouldn't leave his baby mama to fend for herself!  Not their daddy!  They try to scare Heath off, they try to buy him off, and most of all, they try to keep his claims from reaching their mother's ears.

But Victoria overhears them, and in one of the most powerful scenes I've seen in an old TV show, she tells Heath that, if he were her son, she would tell him to be proud of who his father was, and to fight for what is his because no one could deny him his birthright.


It's a moment that makes me want to both cheer and cry, and I just can't describe it adequately, so here's a YouTube video that I have cued up to that particular scene:

It's only 2 minutes, and you get to see some lovely acting from Miss Barbara.

Only after Victoria confides in him here does Heath realize just what his presence must be doing to her.  Heath is a constant reminder that her husband found love in the arms of another woman, although he did return to Victoria in the end.  He's also an ever-present reminder to his half-siblings that their father was not the perfect person they always believed him to be.  No wonder they resent him at first.

Yes, at first.  Because Victoria believes Heath's claims.  Mostly.  She takes him in, but before she fully accepts him, she goes up to the mining camp where he says he grew up and does some pretty spiffy detective work to learn the truth (see the episode "Boots With My Father's Name").

It's not spoilage to say that Heath really is Tom Barkley's illegitimate son, since just looking at any description of The Big Valley will show you that he's one of the main characters for all four seasons.  But Victoria doesn't just say, "Okay, you can have your share of the wealth and the power and the nice clothes and the beautiful horses.  Now go away."  She doesn't try to hide Heath in the kitchen or treat him like a lesser heir because he's not her son too.  She tells the world he's as much a Barkley as her children, she brings him into the family, and she never allows herself to regret doing the right thing.

And Heath's always getting into trouble, almost as much as Nick, so you could see that she might regret it at some point, but she never does.


That's what makes Victoria Barkley so inspirational for me:  her compassion for Heath's plight, her courage to accept that her husband done her wrong, her strong-willed insistence that the rest of the world treat Heath as a Barkley, and the intelligent way she keeps her ranch running and her family safe.  That's why her children and her neighbors love her, and even her enemies respect her.  And that's why I want to be like her when I grow up.  (If I ever do.) 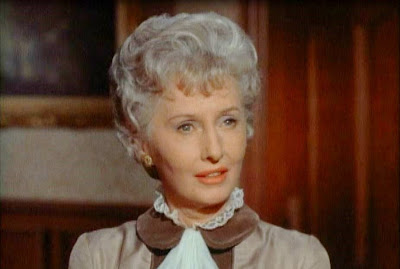 (This is my contribution to the Barbara Stanwyck Blogathon hosted by The Girl with the White Parasol.)
Posted by Hamlette (Rachel) at 12:01 AM