Time for the latest installment in my "Ten Favorite" series.  This time, it's all about the dames, the dinguses, the shamuses, the femmes fatale.  Back alleys and broken dreams all the way.

I first encountered film noir when I was in high school.  Our local PBS station showed classic movies on Saturday nights, and I would record them if they sounded interesting, then watch them later.  One week, they showed The Big Sleep (1946).  I'd recently read the book, my first taste of Raymond Chandler's amazing writing.  I found the movie entrancing, this completely new-to-me style of gritty locations, tough characters, unsavory goings-on, and breathtakingly beautiful cinematography.  With just that one movie, I fell in love with a whole film style I hadn't known existed.

In case you're not familiar with it, film noir means "black/dark film" in French, and these movies are generally very dark indeed.  Usually, there's a crime committed and someone trying to right the wrong or solve the case.  Usually, there are tough men and tougher women -- some evil and some good and most in the grey area in between.  Usually, there's a sad ending, though not always -- most of my favorites end relatively happily.  But always, there is darkness.

So anyway, here are my ten favorite noir films.  Six are classic noir from the '40s, three are amazing neo-noir films, and one you could kind of call kiddie-noir, I guess.  As usual, I've provided my own descriptions and comments, and a link to my review if I've done one here before. 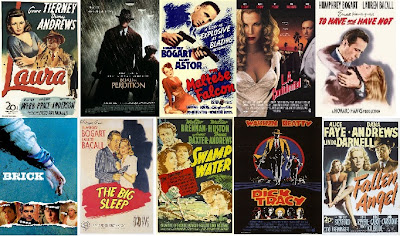 While solving the murder of beautiful Laura Hunt (Gene Tierney), Detective Mark McPherson (Dana Andrews) falls in love with her memory.  One of the most haunting murder mysteries with one of the biggest plot twists.

A hitman (Tom Hanks) takes his son (Tyler Hoechlin) on the run, seeking vengeance for the brutal murder of his wife and other son.  Brilliant acting from all involved, including Paul Newman, Jude Law, Jennifer Jason Leigh, and some dude named Daniel Craig.

PI Sam Spade (Humphrey Bogart) searches for a missing statue, going up against every archetypical noir character in the process.  Gunsels, damsels in distress, femmes fatale, eccentric criminals -- they're all here, and all terrific.

Three Hollywood cops (Russell Crowe, Kevin Spacey, and Guy Pearce) wrestle with corruption, vice, murder, and conspiracy.  One of the most intricately plotted movies ever, with all kinds of disparate strands woven together to form a dazzling whole.

Fisherman Harry Morgan (Humphrey Bogart) gets tangled up with a wandering woman (Lauren Bacall) and a bunch of anti-Nazi French patriots during WWII.  Loosely based on characters from the Ernest Hemingway novel by the same title.

Highschool loner Brendan (Joseph Gordon-Levitt) investigates the murder of the girl he may have loved, discovering a teenage underworld in the process.  One of the most creative movies I've ever seen.

PI Philip Marlowe (Humphrey Bogart) takes a case for a wealthy family with a lot of secrets.  Pairs Bogart again with the love of his real life, Lauren Bacall.

An innocent bayou dweller (Dana Andrews) gets mixed up with a fugitive (Walter Brennan) and his daughter in the Okefenokee Swamp.  A very sweet movie in many ways.

A con man (Dana Andrews) hits town intending to seduce a lonely spinster (Alice Faye) out of her money while carrying on with a waitress (Linda Darnell) on the side.  Nothing goes as he planned.  This is noir, after all.

EDIT:  I feel like I need to post a warning here.  Brick, L.A. Confidential, and Road to Perdition are rated R.  Brick and Road to Perdition are R for violence and strong language.  L.A. Confidential is R for violence, strong language, and sexual content, and it very much earns that R rating.  It looks like Clearplay has filters for all three, and I strongly recommend using one for L.A. Confidential if you decide you want to see it.  But it is not in any way a "family friendly" movie.  The other two would clean up fairly easily.
Posted by Hamlette (Rachel) at 2:47 PM