As I mentioned earlier this month, this is one of my favorite westerns.  But I haven't seen it in probably seven or eight years, so I decided to dust it off to celebrate John Wayne's birthday.  I needed something to get me back in a serious western mood so I could get back to writing my novel, and this definitely did the trick -- I've gotten over a thousand new words in since watching this. 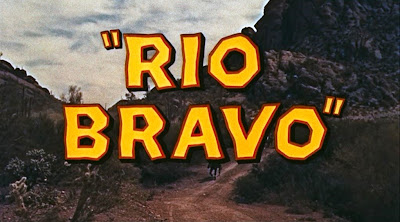 I've read (here and elsewhere) that Howard Hawks was inspired to make this movie when he saw High Noon (1952) and thought it was disgraceful for the hero of the film to go around begging people to help him.  He insisted a good hero would make do with what he had.


So when Sheriff John T. Chance (John Wayne) arrests Joe Burdette (Claude Akins) for murder, he doesn't go around asking for extra deputies to help guard the prisoner until the Marshal arrives in a few days.  Instead, he relies on his two existing deputies, a limping old man called Stumpy (Walter Brennan) and a drunk called Dude (Dean Martin).  Not exactly a group to strike fear in the hearts of evildoers, but Chance insists they're all he needs.


In fact, Chance refuses help from his good friend Pat Wheeler (Ward Bond). Wheeler insists he should have better assistance than just Stumpy and Dude and offers him the services of a young gunslinger dubbed Colorado (Ricky Nelson, in full-fledged heartthrob mode).  Colorado would rather mind his own business, which makes Chance decide he's got good sense.

Chance is worried that anyone who helps him will get on the wrong side of Joe Burdette's brother Nathan (John Russell), who is bottling up the town and trying to force Chance to give up Joe.  He doesn't want anyone to get hurt for helping him, so he refuses all assistance from anyone not already involved.

And yet, people keep right on helping him.  Like his friends Carlos (Pedro Gonzalez Gonzalez) and Consuela (Estelita Rodriguez), who own the hotel where Chance lives.  They help him with supplies and moral support no matter how much he insists he can do everything himself.

There's a new girl in town to further complicate matters, one who plays poker and looks by turns sultry and naive.  She's known as Feathers (Angie Dickinson) because this town is short on names, and newcomers like her and Colorado mayn't have names since there aren't even enough for regular townsfolk like Stumpy and Dude.  Feathers first catches Chance's eye because he thinks she's cheating at poker, but by the end of their first combative encounter, he's hooked.

For a movie about a guy who doesn't need any help from anybody, Chance ends up getting helped by everyone who isn't a Bad Guy.  In fact, his character arc seems to be that he learns he can't do everything himself, which I find kind of ironic considering why Howard Hawks decided to make the movie in the first place.

My favorite character, predictably enough, is Dude.  Why is he a drunk?  Because he was in love with a girl who was no good.  When she ditched him, it broke his heart into teeny pieces, and he crawled into a bottle to try to forget her.  When we first meet him, he's enduring taunts for being so pathetic that he's willing to dig money out of a spittoon to get a drink. 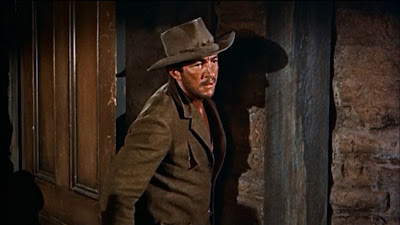 Anyone that defeated and lonely is practically guaranteed to win me over.  Especially when, later on, he cleans up this nicely:

I'm especially fascinated by the friendship between Dude and Chance.  Dude used to be a really good deputy, but thanks to the aforementioned experience, he's now known around town as Borrachon (Spanish for drunk).  Chance hires him back whenever he has any deputy business available that Stumpy can't handle.  Chance also tries to preserve Dude's dignity for him, which Dude resents.  Still, Dude clearly idolizes Chance for being everything he isn't. 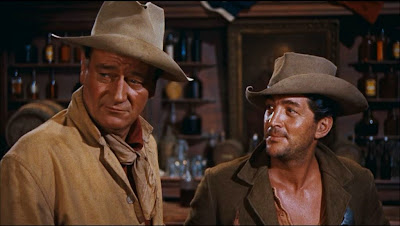 However, near the beginning of the movie, Hawks deliberately stages a long shot of Dude riding and Chance walking beside him while they have a conversation.  The subtext seems to be that Chance metaphorically looks up to Dude as well.  Why?  Because Dude let himself fall in love, and Chance never has?  Because Dude's trying to conquer his addiction?  Because he accepts help?  Or is it saying that Chance can stand on his own two feet, but Dude needs help just to get across town?  Or did Hawks just think it was cool that John Wayne is so tall, he can have a conversation with someone riding a horse?  It's one of many interesting moments between these two friends where there's a lot more going on than just the words that are exchanged. 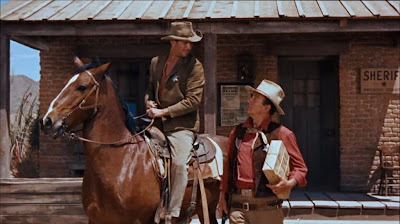 But anyway, I'm also intrigued by the relationship that grows up between Feathers and Chance.  They spend most of their time verbally sparring with each other, with Feathers teasing him and pushing every button she can find.  "I always make you mad, don't I?" she says during their second altercation, clearly enjoying the fact that she can rile him, yet also annoyed with herself for doing so. 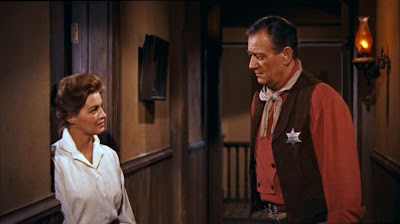 Once we learn that she was widowed four months earlier, we understand her eagerness to keep Chance at arm's length while also clearly needing some kindness and comfort.

You can't have a movie starring Dean Martin and Ricky Nelson without getting them to sing, and they obligingly sing two songs together while they're hanging out in the jail waiting for their doom to arrive.

This post is getting awfully long, so I'm not going to go into any more detail about the plot.  Watch it yourself if you want to know how it all turns out! 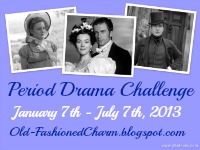 Angie Dickinson gets a few costume changes, but her clothes look to me like they're pretty '50s-ized.  Besides the ones I showed above, here are two more of her outfits: 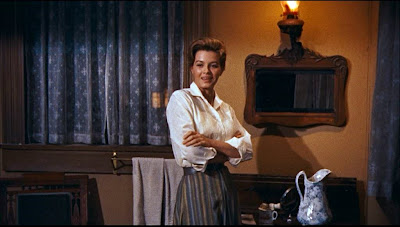 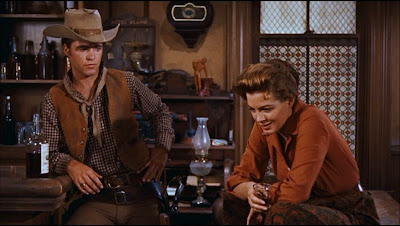 The men get your standard western outfits.  John Wayne wears the same vest, pants, and jacket throughout, though he does change from a red to a blue shirt.  He also cracks me up a couple times when he's putting on a piece of his costume and it won't cooperate -- first, his hand gets stuck in a jacket sleeve, and then later, his vest twists up and he can't get it on right at first.  But he keeps right on going through those wardrobe malfunctions, and they just come off as believable little problems with clothes.  I happen to fight with my clothes that way a lot, so I like his little troubles :-)

Claude Akins gets the one really cool bit of clothing in the movie: 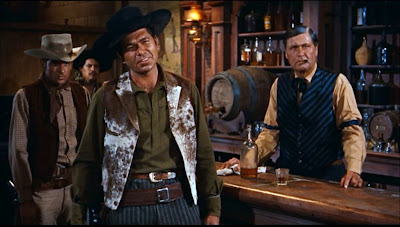 It's a vest made out of some kind of animal skin, either a very unusual cow, or maybe a horse?  Flashy and distinctive, definitely adding to his character of a no-good rich guy.

I'd also like to mention that Colorado and Feathers have very '50s hair, not period at all.  At least, I don't think it is.

Is this a family-friendly movie?  I'd say mostly.  There are a couple mild curse words and some old-style violence (shootings, explosions, and a bit of fisticuffs), and at the very end, Feathers wears what's supposed to be a really scandalous outfit, though today it looks about the same as a fairly conservative swimsuit.  EDIT:  There's also the implication that two unmarried characters spent the night together, but you can also choose to think they didn't, it's kind of up to the viewer. 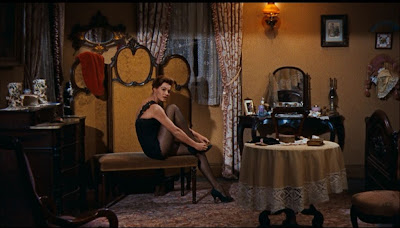 Okay, one final note.  John Wayne does a whole lot of delicious leaning in this movie, and to celebrate his birthday, here are three shots of him for you to enjoy: 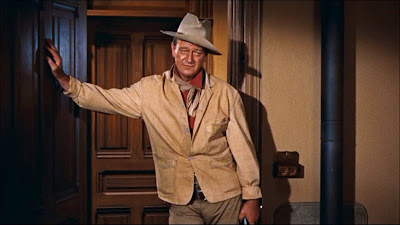 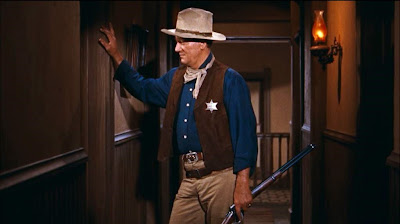 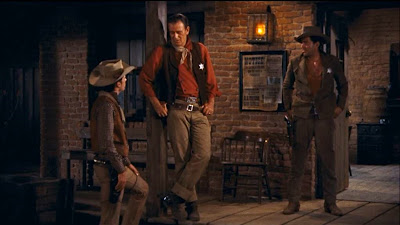