I kind of put all movies that don't fit in another category into "drama."  Not enough action to be action/adventure?  Not funny enough to be comedy?  Not enough cowboyness to be a western?  Into drama it goes!

Like before, I've linked titles to previous posts I've done on those movies and included my own one-sentence synopsis of each movie. 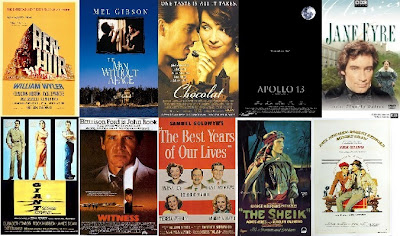 A lonely boy (Nick Stahl) finds an unlikely mentor and friend one summer in the sixties.  My favorite Mel Gibson movie, and one of the first movies I bought when I went to college.

A mysterious woman (Juliette Binoche) opens a chocolate shop in a sedate French village and teaches its inhabitants to reexamine their attitudes and customs.  The yummiest Johnny Depp movie ever -- do not watch this without a good supply of chocolate on hand!

The true story of three astronauts (Tom Hanks, Bill Paxton, and Kevin Bacon) who must survive a space ship malfunction on the way to the moon.  I saw this in the theater when I was 15 with my parents.  It's amazing.

A young governess (Zelah Clarke) teaches her employer (Timothy Dalton) about love and honor.  My favorite adaptation of my favorite novel.

A spoiled East Coast beauty (Elizabeth Taylor) marries a stubborn Texas rancher (Rock Hudson), and they spend twenty-five years trying to figure each other out.  One of the first movies I can remember seeing, and my favorite James Dean movie.

Detective John Book (Harrison Ford) goes undercover to protect a little Amish boy who is the only witness to a murder.  Taut and sweet at the same time.

A willful English socialite (Agnes Ayres) catches the eye of a handsome desert sheik (Rudolph Valentino), then captures his heart with her refusal of his attentions.  Trust me, it makes a lot more sense on-screen.

Two con men (Paul Newman and Robert Redford) try to con a ruthless businessman (Robert Shaw) who had their good friend murdered.  Try really hard to see this spoiler-free, it's a lot more fun that way!

Well, there we have it, my second list in this series.  Have you seen any of these?  Did you like or dislike them?  What are your favorite dramas?  Do you have a better way of classifying them than mine?
Posted by Hamlette (Rachel) at 3:07 PM