Inspired by the Flowers of Quiet Happiness post listing Kara's favorite rom-coms, I've decided to do a series of posts listing my ten favorite movies in various genres.  I think I'll go in the order in which I've arranged my movies on my shelves (I have them organized first by genre, then by alphabet), which means I'll start with my favorite movie genre of all, westerns!  If I've previously done a post about a particular movie, I've linked the title to that post.  I'm also including my own one-sentence synopsis of each movie, and any thoughts I might feel like adding. 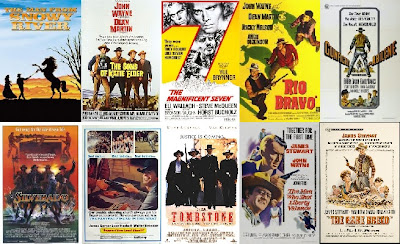 Jim Craig must clear his name after he's accused of freeing his employer's most valuable horse in retaliation for being told he can't court the boss's daughter.  Sometimes I don't consider this to be a western, but it's about guys riding horses and rounding up cows, so... that makes them cowboys, right?  It's about Australia, not the American West, but oh well.

Four brothers (including John Wayne and Dean Martin) reunite at their mother's funeral and work together to find out how their parents lost their ranch.  My favorite John Wayne movie!

A sheriff, a recovering alcoholic, an old man, and a young gunslinger fend off a host of bad guys bent on springing a murderer from jail.  John Wayne, Dean Martin, Walter Brennan, and Ricky Nelson play the four heroes.  Angie Dickinson plays the love interest.

A Civil War veteran agrees to resume his job as sheriff out of guilt for accidentally killing the brother of the man who runs Abilene.  My favorite Bobby Darin movie.

Four outcasts set out to rid Silverado of the evildoers who sent one of them to prison unjustly, stole another's horse, and debauched another's sister.  The best "modern" western, IMHO, and has a knockout soundtrack.

Jason McCullough (James Garner) uses unorthodox methods to clean up a town and woo the mayor's daughter.  The funniest western spoof I've ever seen, and possibly the movie my father quotes more than any other.

Wyatt Earp, his brothers, and his pal Doc Holliday face off against the outlaw band called The Cowboys and bring them to justice.  Val Kilmer's turn as Doc Holliday is mesmerizing (and so quotable!), and he's really the whole reason I love this movie.

A young lawyer faces down a notorious outlaw, and what everyone believes happened during that shoot-out launches his political career that takes him far.  I love the way John Wayne and James Stewart engage each other in this, bringing out some great acting in each other.

A British widow and her daughter accompany the prize bull they've sold on its way to its new home in Texas, convinced it will revolutionize the cattle industry.  James Stewart, Maureen O'Hara, Brian Keith, Don Galloway, and Juliet Mills -- their characters are like my dear friends.

I did a list of my favorite westerns about six years ago, and I see that my ordering has changed a bit since then.  The old list is here.

Have you seen any of these?  Did you like or dislike them?  What are your favorite westerns?  Maybe you'll recommend some I haven't seen, and I'll discover some new favorites!
Posted by Hamlette (Rachel) at 10:32 AM