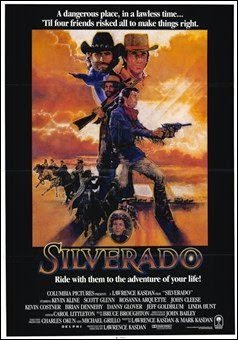 This, my friends, is one of my absolute favorite westerns.  Ever.  In my top ten list, I put it at number 6.  It's about some unlikely friends who, having only just met, work together to rid Silverado of a bunch of evildoers.  You can see why it appeals to me, right?  Got that whole "found family" thing going on, and also a couple sets of actual siblings.

Also, I'm reviewing this especially for Carissa's Goldblum Fest, which runs through the 29th.  So I'll be spending a bit of extra time discussing Jeff Goldblum's role in this, giving him a few extra screenshots, etc.  And yeah, this is gonna be one of those screencap-happy posts.  Not nearly enough Silverado screenshots out there.

Silverado was written by brothers Lawrence and Mark Kasdan, and directed and produced by Lawrence Kasdan.  Basically, if my best friend and I ever wrote a western together, and we knew it was our one shot at getting our own cowboy movie made, this is what would happen.  We would cram every single thing we love about westerns into that one movie.  Showdowns, wagon trains, bar fights, beautiful scenery, farmer vs. rancher tension, gamblers, saloon girls, stampedes, everything.  The result?  A love letter to westerns, and a thoroughly satisfying movie.  Of course, having all those things in it does make it feel episodic, as we bop from one classic adventure to the next, but you know what?  I like episodic stories.

Okay, here we go.  And folks, there's gonna be spoilage, so just be aware.  I won't go into specifics on how it all ends, but I'm not holding back.  This movie is 30 years old, and I figure the expiration date on its spoilage is up.

This movie starts out real quiet-like, in a dark shack where a lone man is sleeping.  Suddenly, someone kicks the door open and starts shooting at him.  He shoots back and kills all four of his unknown assailants.  That's the first we see of Emmett (Scott Glenn), though we don't learn his name until later.  He doesn't speak a word, and neither do any of his attackers.

Oh, and just so you know, Emmett just got released from prison after doing five years for a murder he didn't commit.  He killed a guy, yes, but it wasn't murder.  We find that out later, but I can't figure a good spot later in this post to include that info, so just tossing it in here.  I do have to include it, though, because "wrongful imprisonment" is a huge sweet spot for me.

There are a lot of gorgeous shots in this movie, like this one of Emmett's hand.

Well, Emmett lights out with two of the horses his dead attackers left behind.  Pretty soon he sees something very odd out in the distance, which turns out to be a man wearing only a union suit and socks, lying flat out on the sand.

Emmett gives him water, and the man says the first words of the whole movie:  "Pleased to meet you."  Which makes Emmett grin.

This guy, Paden (Kevin Kline) was bushwacked by some mean hombres, who took everything he had and left him to die.  He eventually reunites with his horse, which I only mention so I can include this hilarious screenshot of him kissing his horse.  Also, that guy on the right with the beard is Sheb Wooley, who was in gobs of classic westerns, like High Noon (1952) and the TV show Rawhide.  He's not important to the rest of the story, but he's important to lovers of westerns, so I simply had to mention him.

Along about that time, we also meet up with a guy named Cobb (Brian Dennehy).  Paden used to ride with him, and he offers Paden a new job now, in what he says is a legitimate business.  Not like before.

Paden elects to keep riding with Emmett instead, and good for him, since we can all tell Cobb's bad news just from how overly smiley he is.  Paden and Emmett ride on, heading for Silverado, where Emmett's got family.  They stop off at a little town so Emmett can meet up with someone, and they also bump into a guy named Mal (Danny Glover).

And then John Cleese shows up.  Now, is it just me, or does the phrase "John Cleese in a western" just make you giggle?  I know it does me.  The thing is... John Cleese always plays John Cleese, no matter what he's in.  Here, he's John Cleese as a sheriff who cracks down very hard on anyone who makes any kind of trouble in his town, including Mal, who caused a ruckus when he fought back against some evil racists.  Again with those interesting camera shots.

Anyway, they finally find that guy Emmett wanted to meet up with.  Guess where he is?

That's Jake (Kevin Costner), a "young fella, full of juice," as Emmett calls him.  He's Emmett's little brother, so obviously we can't just leave him there.

This is my absolute favorite Kevin Costner role.  He's full of fun, all playful and cute, and he continually makes me grin.  This carefree little brother who loves doing silly stuff, but doesn't always think things through real well.

So anyway, after a prison break, what else would we need but some beautiful scenery and a montage of four guys riding horses while amazing music plays?

You're right -- that's exactly what we need right there, so it's a good thing that's what we get.  This seems to be a good place to mention that this has one of my favorite scores ever, by Bruce Broughton.  You can listen to a lot of it on YouTube.  I highly recommend it!

Okay, back to the story.  The four of them meet up with a stranded wagon train full of worried settlers who got swindled by their guides.  One of the settlers is very pretty (Rosanna Arquette), and catches Paden's eye.

After a bunch of thrilling heroics, we finally get to Silverado, where Jake and Emmett are reunited with their sister and her family.

Meanwhile, Paden's reunited with his favorite place in the world:  a good saloon.  Again with those fabulous images, huh?

There, Paden meets Stella (Linda Hunt).  She runs the saloon, and they quickly bond over a shared love of good liquor and questionable surroundings.  They have a really cute friendship through the rest of the movie, and their scenes together are some of my favorites.

Now, I promised you Jeff Goldblum, and here he is!  Arriving on the stage coach at last.

He wears this astonishingly large fur coat, which I had to take several screenshots of.  Here's one.  He's a gambler called Slick, and quickly makes himself at home in Silverado.

He takes up with one of the saloon girls, Rae (Lynn Whitfield), who happens to be Mal's sister.  Mal's been having some troubles -- he came to Silverado to join his family on their farm, but finds it's been burned to the ground by ranchers, his mother is dead, and his father is living in a cave.  Not to mention, his sister has moved to town and is now a woman of ill repute.  Poor Mal!  So much plot crammed into so little time.

Okay, so remember I said Emmett just got out of prison for killing someone?  Yeah, that someone has a son, called only by his last name, McKendrick.  He is none too pleased to see Emmett back in town, on account of having framed Emmett for his pa's murder and all.

Oh, and there's this guy named Tyree who works for Cobb, who used to run with Paden and Cobb, and he hates Paden because of reasons, and he also hates Jake cuz they like the same saloon girl.  Blah blah blah.  Now, Tyree is played by Jeff Fahey, and the only other thing I've ever really seen Jeff Fahey in is Lost, where he does not play a bad guy.  But I had seen Silverado so often that I had him cemented in my head as a sidewinder, so it took me a long time to trust him on Lost.

Oh, but back to Jeff Goldblum, because I took a couple more screenshots of him.  So here's some serious Jeff:

And here's some laid-back, card-playing Jeff:

Here's Jeff looking not at all suspicious and shifty, wearing that huge coat again:

It makes him look like a football player or something.

One more Jeff Goldblum picture, and then I really must get back to the movie.

Right, so McKendrick's men beat Emmett up and try to kill him.  They tie him up and run over him with their horses because shooting him would just be too sensible and boring.

Meanwhile, Stella explains to Paden just how rotten things really are in Silverado.  See?  Aren't they sweet together?  Totally a platonic friendship and I love it to pieces.

So lots and lots of plot happens, and there's heaps of shooting, and it all culminates in a classic showdown on the street.

I love the framing here, with Paden against the backdrop of the town, even a white church there to be sure we understand that he stands for Truth, Justice, and the American way.

And then there's Cobb, who stands for nothing at all.  Nothing but a desert behind him, a barren wasteland.

So yeah, more excitement happens, and all the good guys beat all the bad guys, and we have a happy ending.  Yay!

Um, except for Jeff Goldblum.  Sorry, Jeff.  If only you hadn't played a stinker in this, you'd have gotten a happy ending too.

Now, is this movie family-friendly?  There's a good bit of violence, though little blood and no gore.  There are a few swear words, including the one I hate most:  GD.  Suitable for teens on up, I'd say.

There you have it, folks!  Don't forget to visit Carissa's blog for the rest of Goldblum Fest.  She's doing a bunch of posts herself, and other people like me are joining the fun with movie reviews and such on our own blogs.  You can find the full list of participatory posts here. 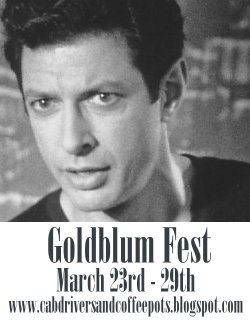