I've only seen The Eagle three times, but it's one of my favorite Valentino movies (the others being The Sheik, Moran of the Lady Letty and Son of the Sheik).  It's got a great swashbuckling vibe, and also a lot of humor.  I wish Rudy had gotten more comedic moments in his movies, because he works so well with them.  One of my favorite moments in The Eagle is when he's trying to take off a ring to give to a girl as a love-token, but it won't come off his finger!  He pouts, grimaces, and finally gets the ring off with a smile of relief.  Adorably funny, I tell you :-)  He has a couple more comic moments here too, including one involving over-peppery soup that amuses me.

As usual, Valentino is cast as yet another exotic "other" character, this time a Russian soldier in Czarist Russia.  Actually, no, Czarina-ist Russia -- there doesn't seem to be any Czar at all.  And the Czarina (Louise Dresser) is quite the piece of work! 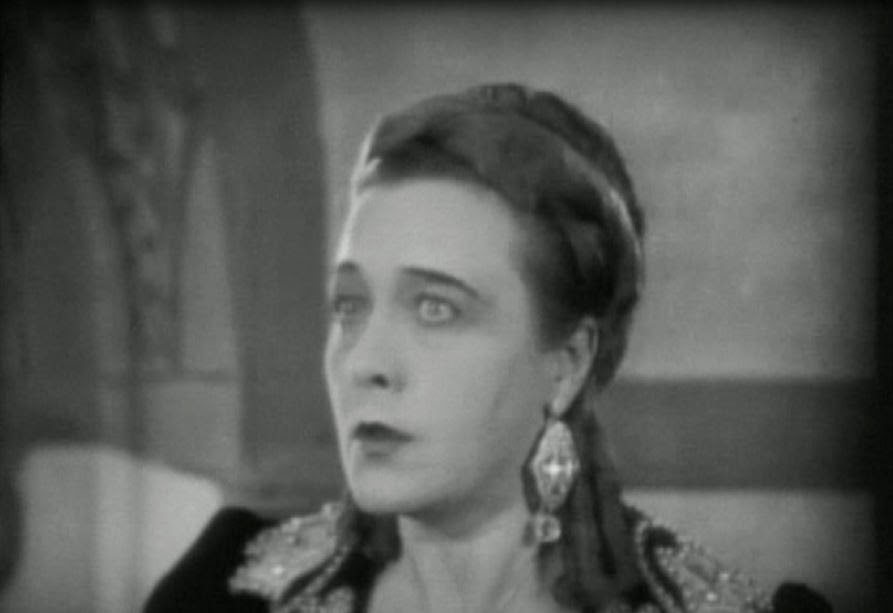 She notices that a certain lieutenant in her favorite military unit is very handsome, one Vladimir Dubrovsky (Rudolph Valentino), who saves some random women from a runaway carriage.  She asks to have him brought to her, and then tries to seduce him. 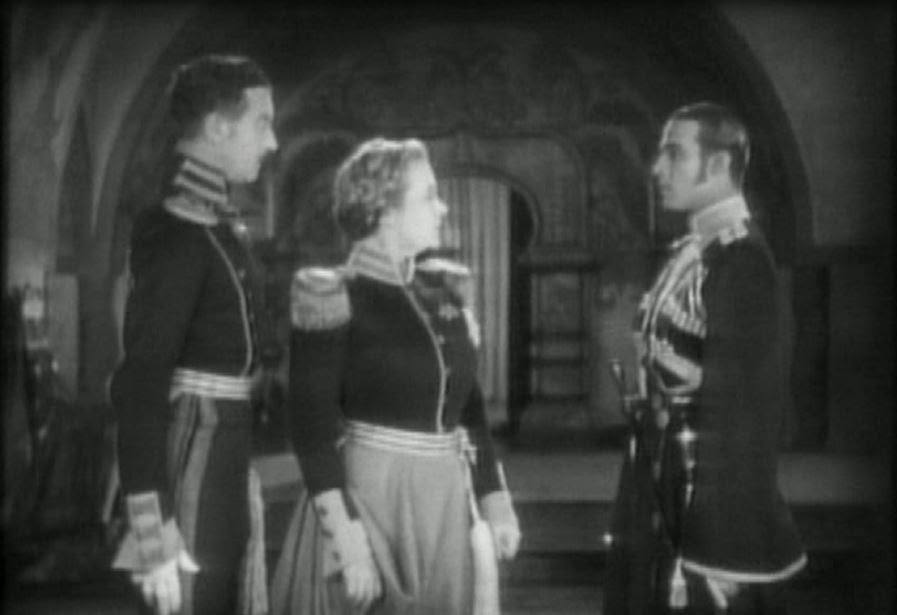 Okay, yes, Rudy is temptation personified, especially compared to every other male in this movie.  Even in his rather ridiculous costume uniform.  The Czarina eyes him like he's a bowl of borscht, which cracks me up.  One of my favorite things about this movie is how it parodies many of Valentino's earlier roles and sends up his reputation as an object of affection from women who don't know him.  What moviegoing woman of the 1920s didn't want to be the Czarina, prowling around Valentino? 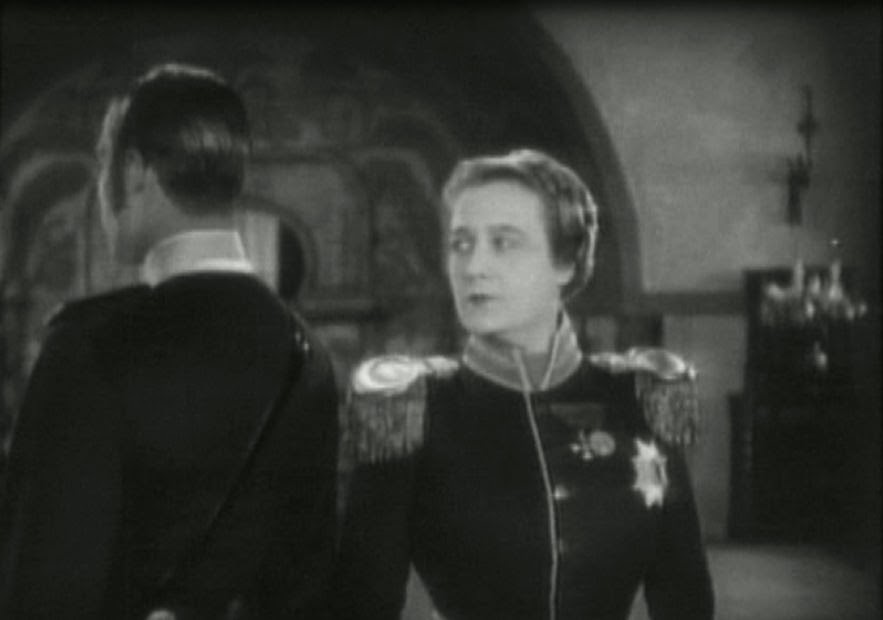 The whole scene reminded me so much of the "marriage bazaar" scene from The Sheik, only with the gender roles reversed.  Dubrovsky soon realizes the real reason the Czarina has summoned him.  He doesn't look thrilled, does he? 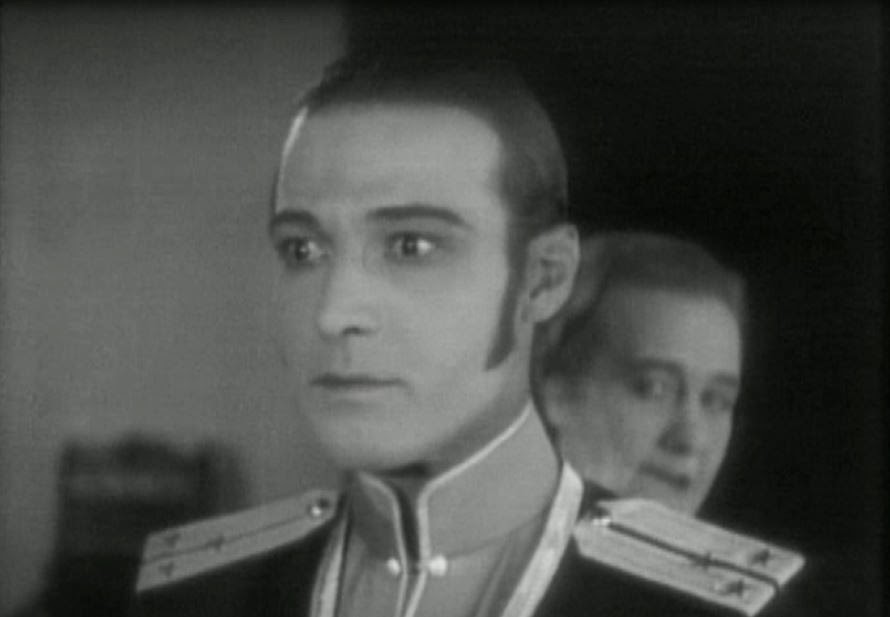 The Czarina tries to get him drunk.  They pretend to toast each other, then each discreetly dispose of their alcohol in a convenient plant when the other isn't looking.  The Czarina, convinced after a few "drinks" she can have her way with him, leaves to change into something a little more comfortable.  Dubrovsky flees to save his manly virtue.  The enraged, disappointed Czarina declares him a deserter and puts a price on his head.  Hell hath no fury, etc.

Now, back in whatever little Russian village Dubrovsky came from, an Evil Bad Guy named Kyrilla (James A. Marcus) has cheated Dubrovsky's father out of his home and land and fortune and whatever.  Remember those two random women from the runaway carriage?  Not so random, actually -- they're Kyrilla's daughter Mascha (Vilma Banky) and her Aunt Aurelia (Carrie Clark Ward).  On their way home to what used to be Dubrovsky's house and is now theirs, they get waylaid by the henchmen of The Eagle. 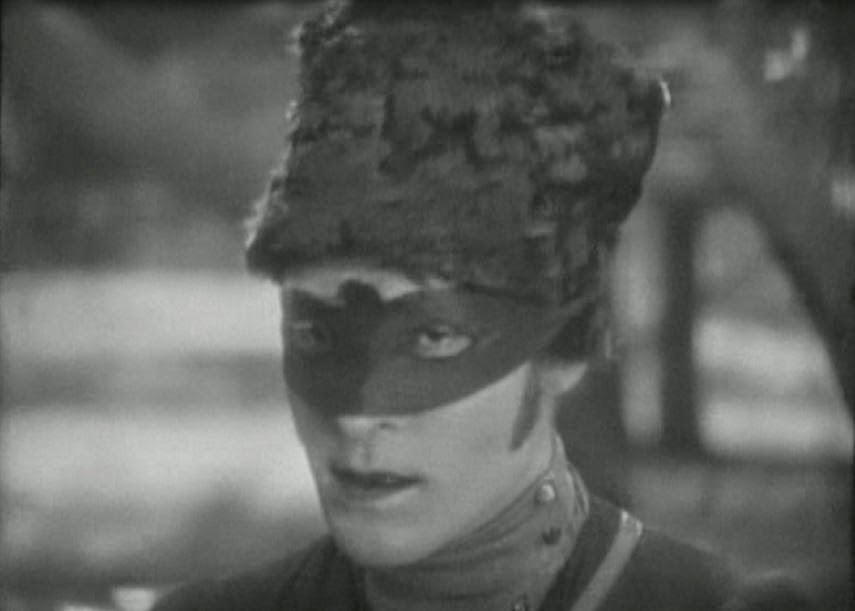 Um, yeah, no prizes guessing who The Eagle actually is.  Don't you like how his mask has a little bird head on it?  Very symbolic and fancy.  Anyway, his henchmen capture Kyrilla's daughter Mascha and take her to The Eagle/Dubrovsky.  And here we get a little foretaste of the bondage aspects of The Son of the Sheik.  Dubrovsky contemplatively bends his riding crop, eyeing Mascha speculatively. 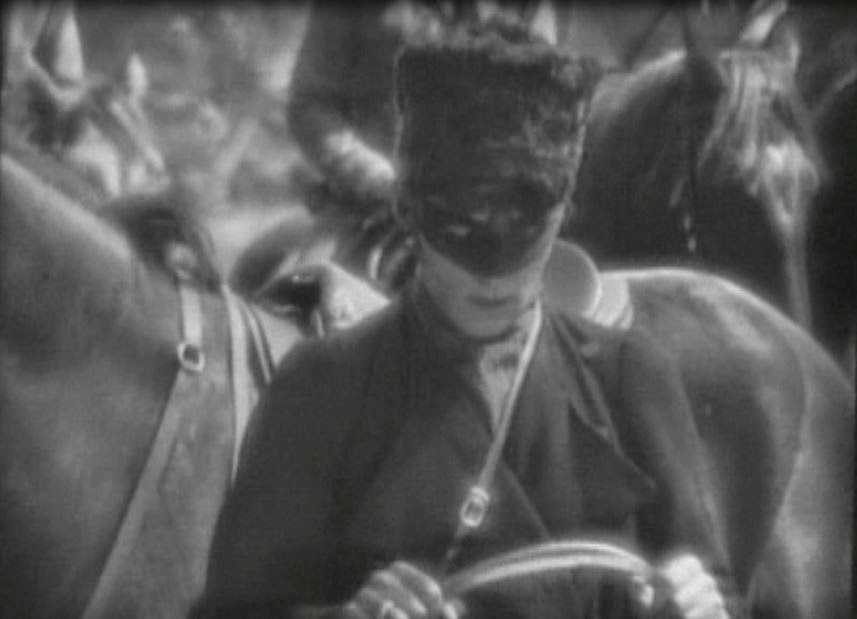 Mascha is pretty sure she knows what's coming, and she is appalled. 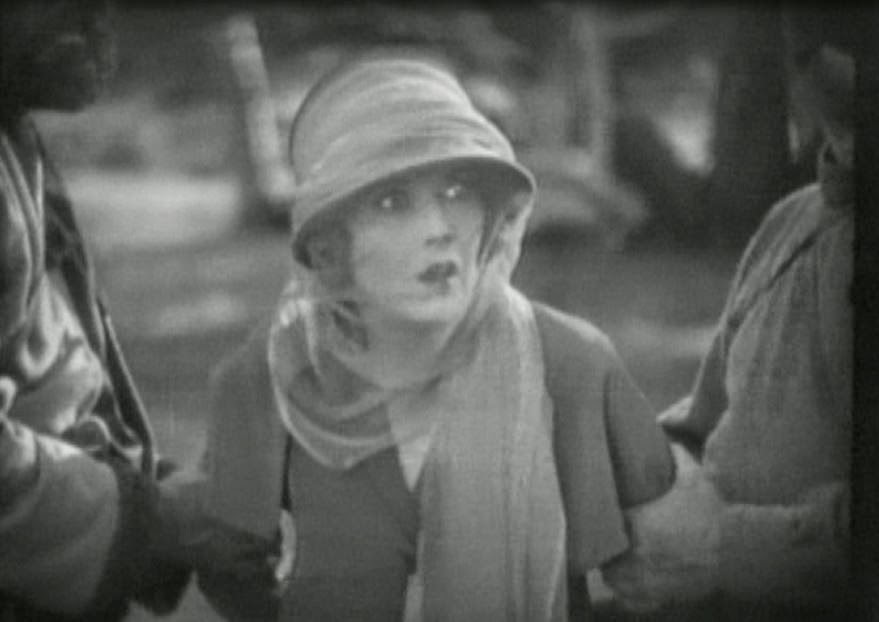 But instead of hitting her, he berates his henchmen for tying her up, then unties her hands himself.  Which, it seems, is a magical experience, judging by her expression throughout. 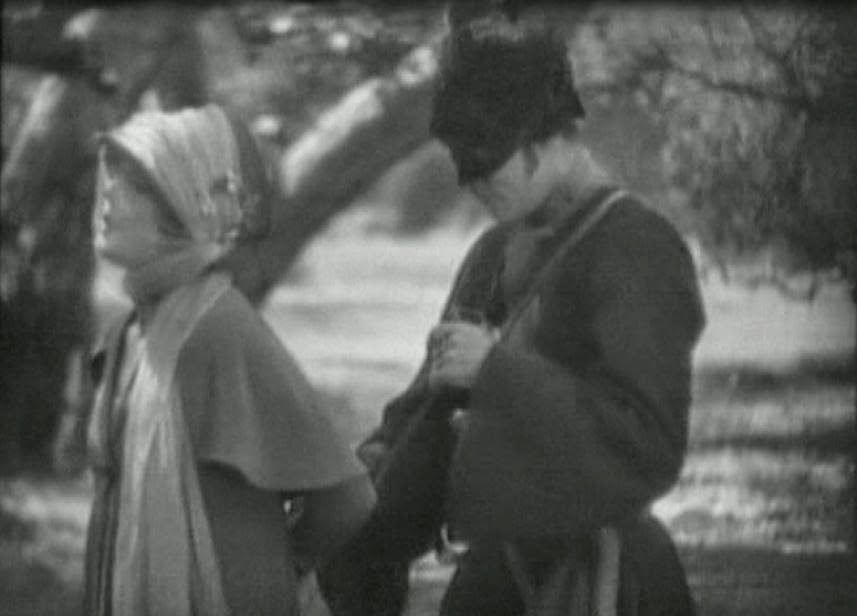 And then they smile and flirt a bit.  Because they're Vilma Banky and Rudolph Valentino, so what else would they do? 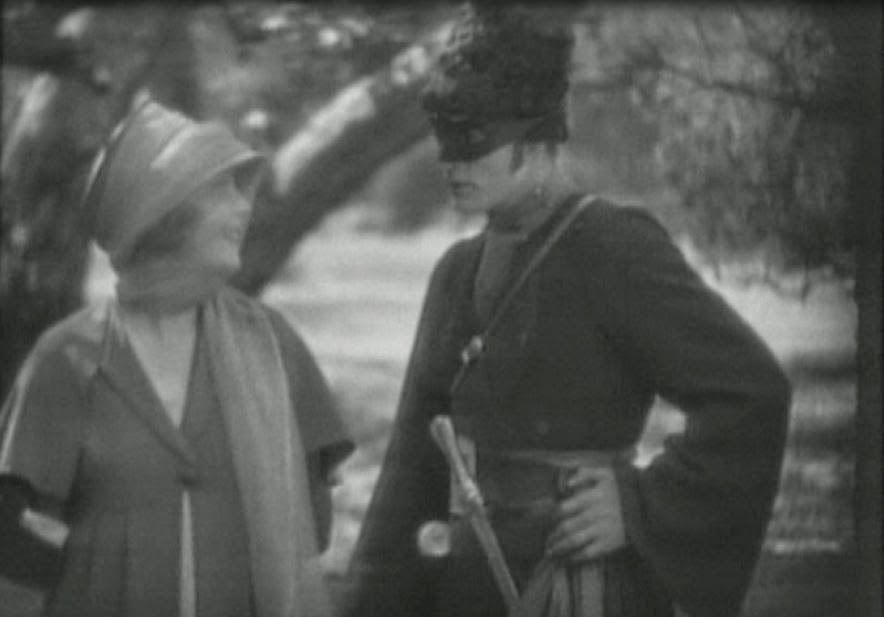 And then some plot happens.  Dubrovsky impersonates a French tutor for Mascha to gain entry into Kyrilla's household so he can avenge his father's losses and death.  You can tell from his determined look that he has no ulterior motive involving Mascha. 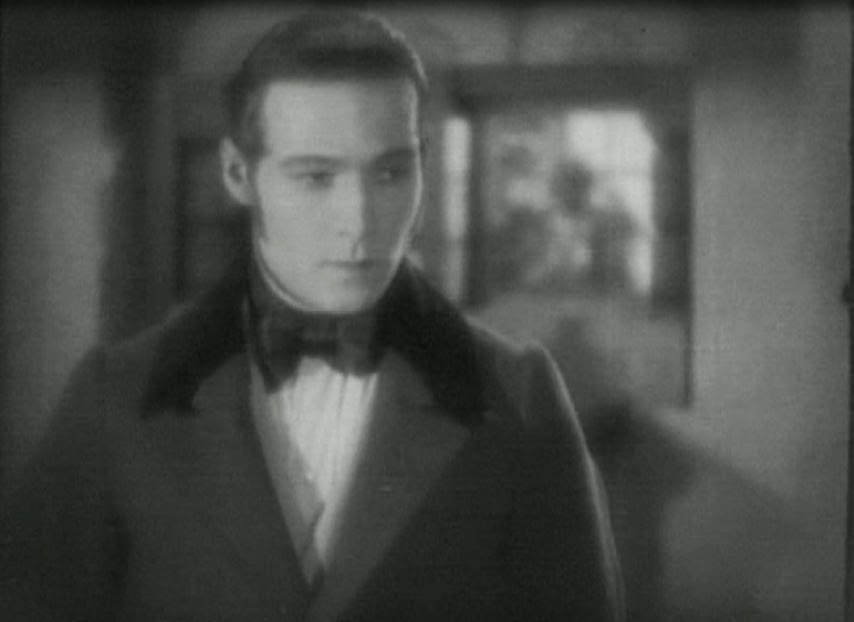 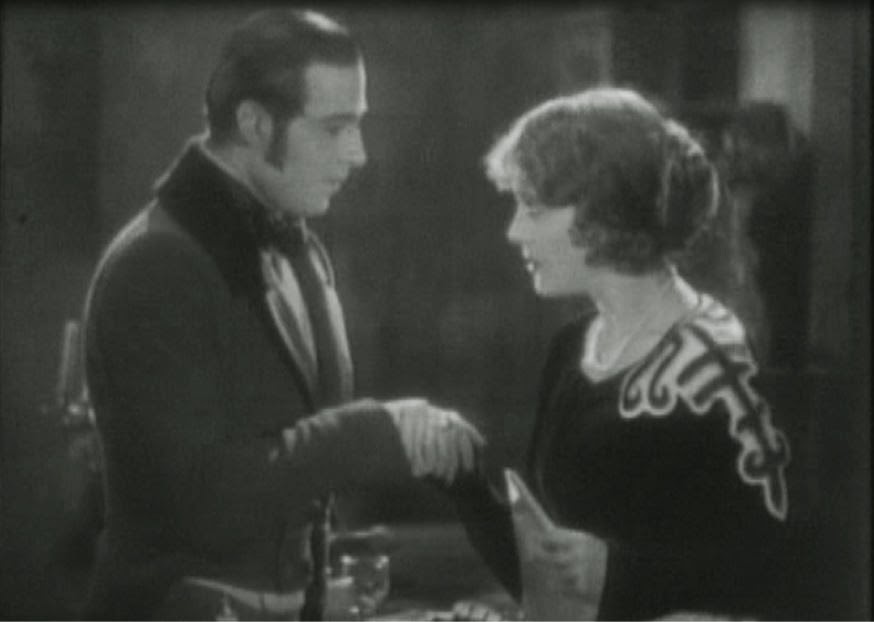 Yeah, really not so slight. 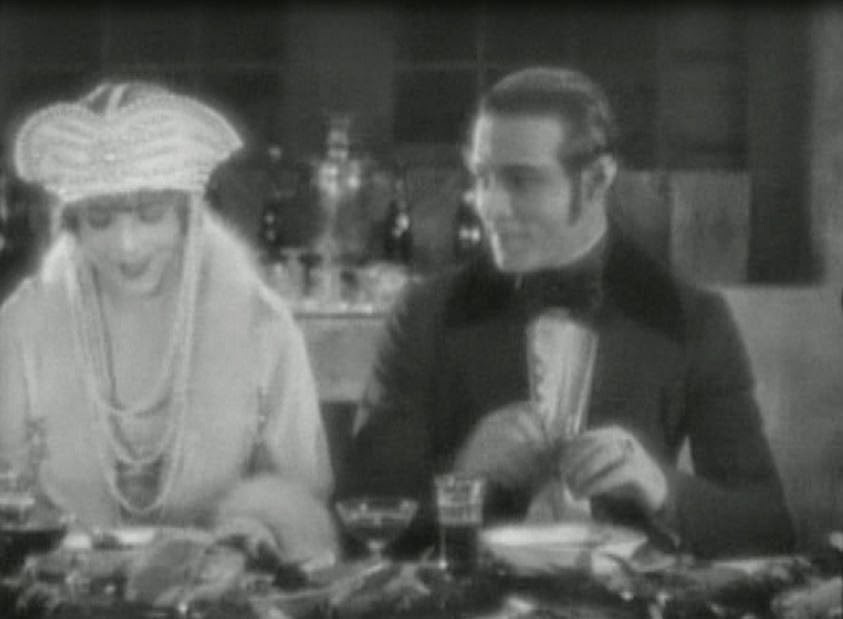 Kyrilla doesn't like that new French tutor making eyes at his daughter, so he sends him to the wine cellar to get a bottle of whatever he wants.  The wine cellar just happens to be guarded by a man-eating bear. 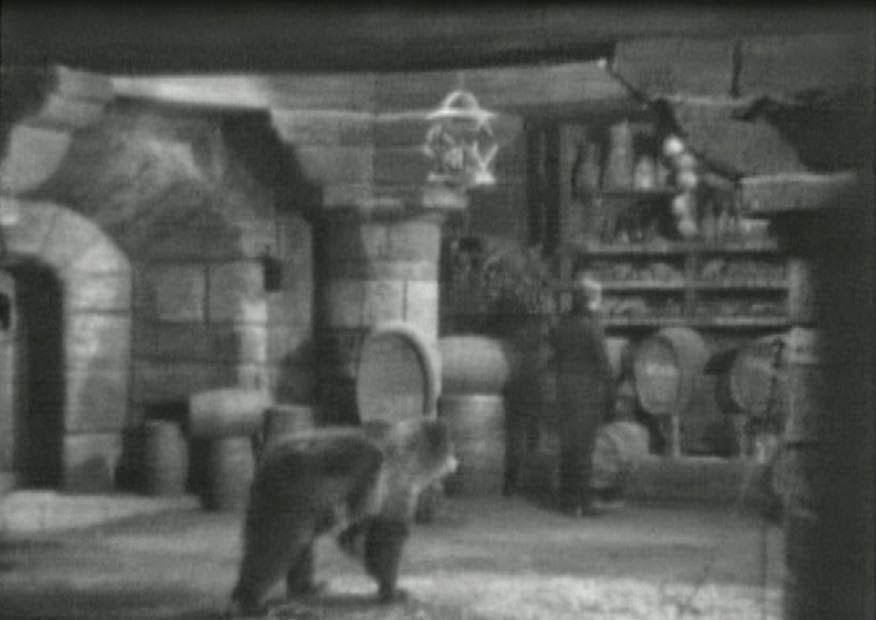 Dubrovsky is not afraid of bears. 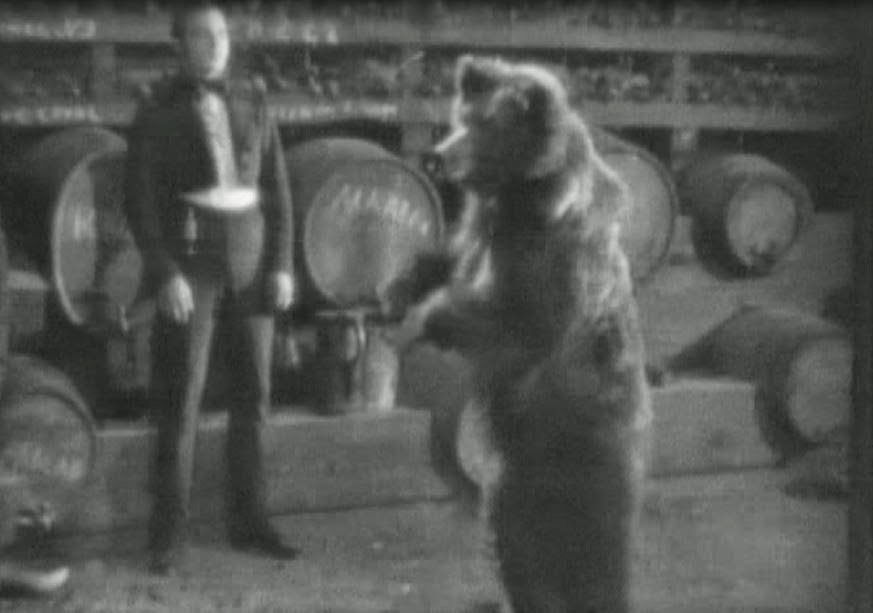 I was super impressed that they had a real bear for this!  Not a guy dressed up in a bear costume.  Very effective.  Some bear-related violence ensues, and Mascha swoons.  Always remember to swoon if Rudolph Valentino is around, because he'll catch you very handily, and then look at you like this: 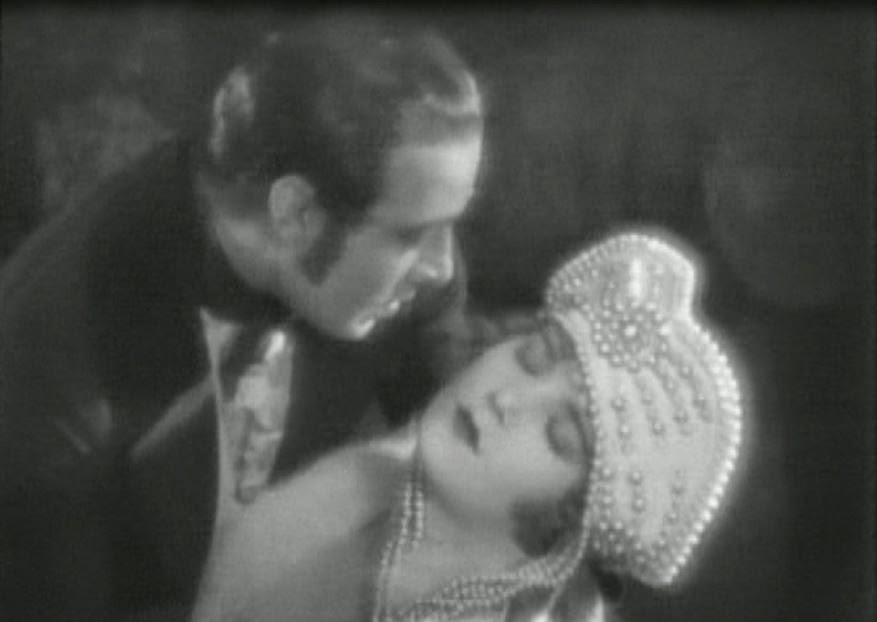 So yeah, eventually that arrest warrant from the Czarina catches up with Dubrovsky, and he gets captured.  He's sentenced to death by firing squad, and his last request is to marry Mascha, so they have a sad little prison wedding. 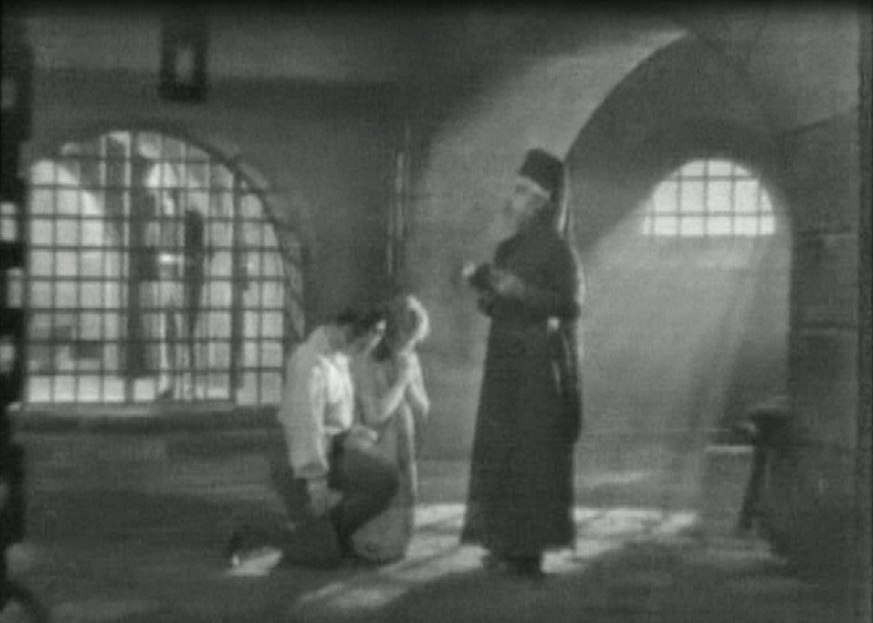 And I forgot to mention General Kuschka (Albert Conti).  He stepped in to fill the empty space in the Czarina's love life when Dubrovsky fled, and at the end he turns out to be a brilliant and sweet person who totally fixes everything and saves the day. 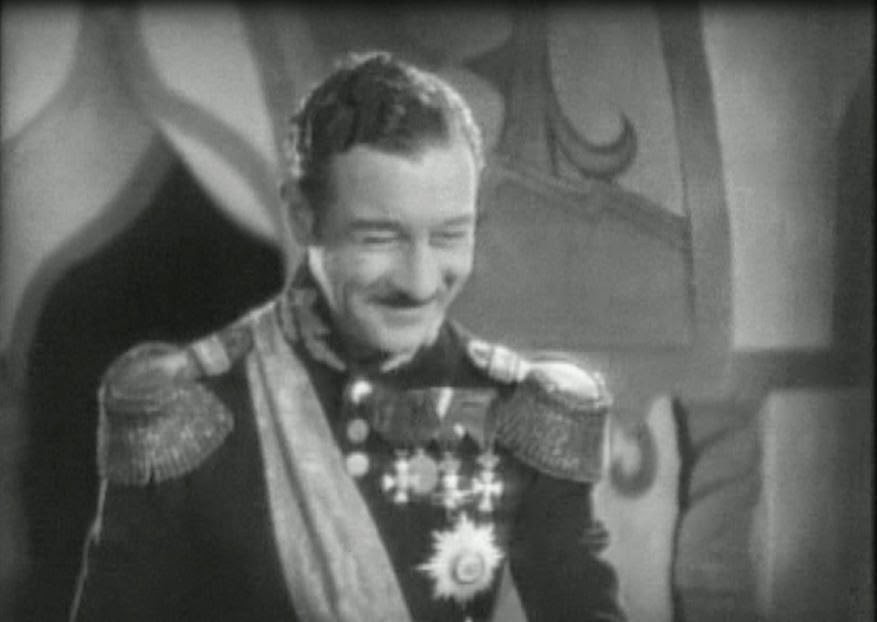 The end!  Smiles all around! 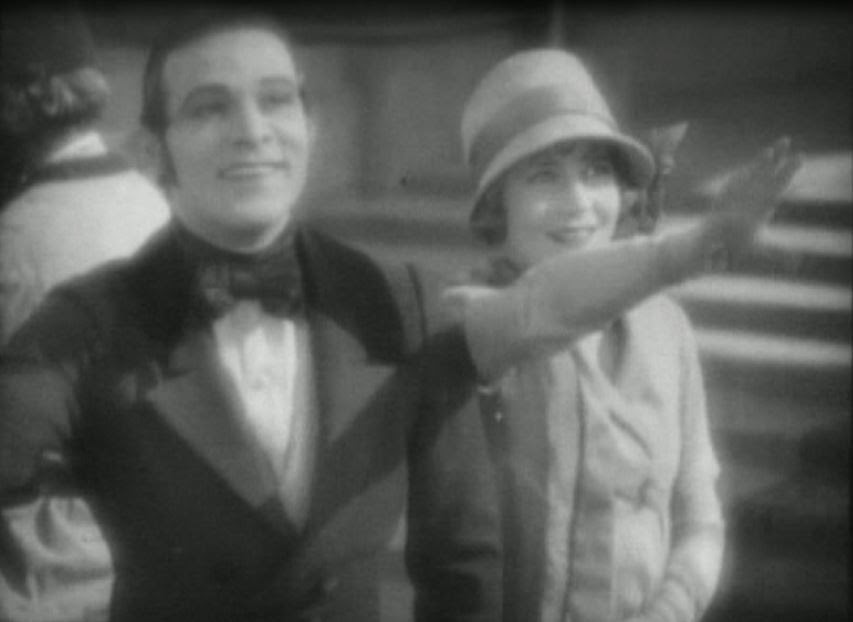 You can watch The Eagle online for free here or here, though neither is as clear as my DVD copy.  Which, you can tell from my screencaps, isn't exactly crystal either, but I don't care.  This is a genuinely enjoyable movie, with swashbuckling overtones of Robin Hood and Zorro.  And if you're familiar with some of Rudy's early movies, it is great fun to watch how they take things from those earlier films and either parody them or twist them to new ends.  I mentioned a couple such instances already, and there are others, but this is already a long post, so I'll let you try to find them yourself if you so desire. 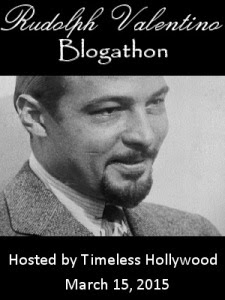