There's only one costume I truly dislike, and that's Aragorn's outfit he wears in Rivendell during FOTR. 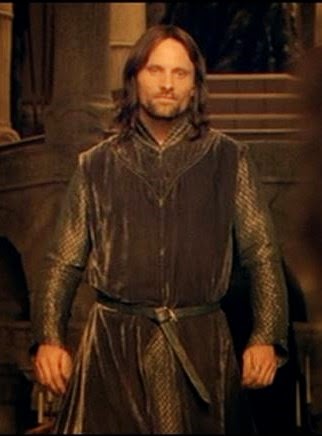 I'm not sure exactly why I dislike it so much.  Maybe because I love his black Strider clothes very much, and when he ditches them for these very boring things, I sulk.  I call them his pajamas and make snide remarks about him wearing loungewear to the Council of Elrond.  But come on!  Aragorn looks like this:

By contrast, Boromir shows up wearing this:

Is it any wonder that Boromir is shocked and disdainful when he learns who Aragorn is?  The dude wearing velveteen pajamas is Isildur's heir?  Yikes!

I must admit, though, that he seems to be wearing some great boots.  You only get to see them in a couple of wide shots, though.

So now you know.  I'm annoyed by Aragorn's pajamas, and the sooner he gets back into his grunged up Strider gear, the better.