For Dodge City (1939), director Michael Curtiz reteamed with a trio of actors from the previous year's Adventures of Robin Hood (1938) to make a feel-good western with plenty of action and adventure of its own.  Instead of Robin Hood, Errol Flynn here plays Wade Hatton, a Texas cowboy with plenty of cheerful determination.  Instead of Maid Marian, Olivia de Havilland plays Abbie Irving, a sturdy pioneer with a wayward brother.  And instead of Robin Hood's loyal sidekick Little John, Alan Hale plays Wade Hatton's loyal sidekick, Rusty Hart.

This movie is just gobs of fun.  I can't wait to watch it with my kids.  They already love Olivia and Errol in Robin Hood, after all, and they're fond of westerns.

So what happens is, Dodge City, Kansas, is run by a greedy meanie named Jeff Surrett (Bruce Cabot).  He keeps the city wild and woolly and violent because then no one will challenge his right to buy cattle for ridiculously low prices and make gobs of money on them. Wade Hatton brings a herd of cattle to Dodge.  Along with the cattle, he's bringing a few wagonloads of people.  People like pretty orphan Abbie Irving and her brother Lee (William Lundigan) -- they're on their way to live with their uncle (Henry Travers) in Dodge City.  Lee's a drunken fool who keeps causing trouble, like stampeding the cattle, and one day he tries to kill Wade, so Wade has to kill him.  You can imagine how much that makes Abbie like Wade. 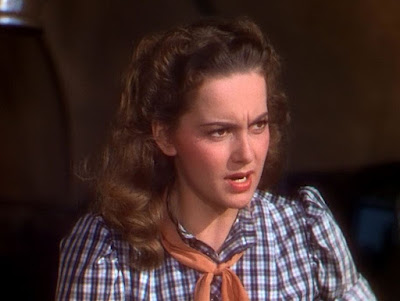 Wade doesn't actually care if she likes him or not, as he's just there to sell cattle.  Only that greedy meanie Surrett doesn't offer him a fair price for them, so he refuses to sell them.  You can also imagine how much that makes Surrett like Wade. 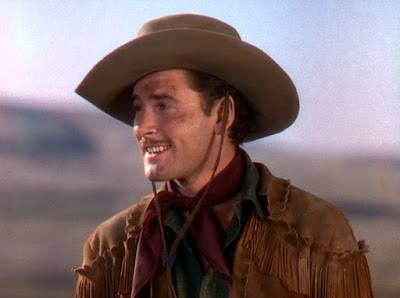 Because Wade stands up to Surrett, the people of Dodge City want him to be their new sheriff.  Wade doesn't want to do it, but after he gets a few tastes of Surrett's villainy, he agrees.  This movie doesn't exactly have a plot aside from "let's get rid of Surrett," but it's so much rollicking fun that it doesn't need more than that.  We get one of the biggest saloon brawls ever filmed, lots of derring-do from Errol, and a grand finale that involves a burning train hurtling down the tracks with our heroes aboard.  Good stuff. 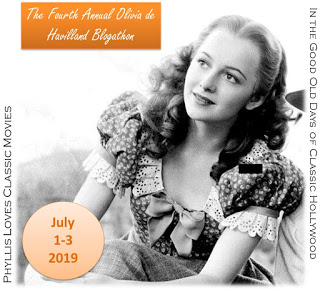 This has been my contribution to the Fourth Annual Olivia de Havilland Blogathon hosted by Phyllis Loves Classic Movies and In the Good Old Days of Classic Hollywood.  Happy belated birthday to Ms. de Havilland, who turned 103 on Monday!

Is this movie family friendly?  Yes.  Some violence and alcohol consumption, but that's all.
Posted by Hamlette (Rachel) at 8:24 PM