Saw it in the Movies Tag

Movie Critic tagged me with this, and you know I like tags, so here goes :-) 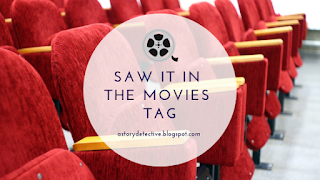 The rules:
+ Pick at least 3 things that you have done from a movie. It can be any movie, anything you did.
+ Tell how the event worked out.
+ Link back to the tag's creator and the person who tagged you.
+ Have fun.
+ Tag 4 people.
+ Use the header.

Um, yeah, so I do a lot of stuff because of movies.  Mostly I just say particular words and phrases in specific ways because of movies or because of actors.  Like I tend to say the word "horrible" like Gene Kelly does -- more like "harrible."  Just because.  Or instead of saying "something like that" to reply to someone, I always say, "Something like this, yes," like Illya (Armie Hammer) in Man from U.N.C.L.E. (2015).

But sometimes I DO things because of movies too.  Like these:

I spent countless minutes as a child practicing my fast draw.  Because all my cowboy heroes had a fast draw.  I learned two important lessons:  1. If your gun doesn't fit in your holster, it's not going to work very well, and 2. I'd better not get in any gunfights where the speed of my draw is going to matter.  I'm a pretty good shot with a rifle and an okay shot with a pistol, but I do not have anything you could even pretend was a fast draw.  At least not with plastic pistols that don't really fit in my fake-leather gunbelt. 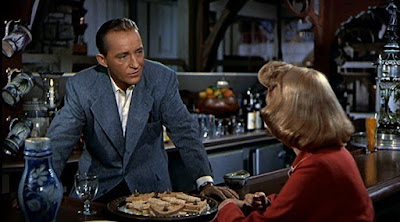 I got super excited when I was a newlywed because my husband bought liverwurst at the grocery store one day.  See, there's a little scene in White Christmas (1954) where Bing Crosby tells Rosemary Clooney that if you eat liverwurst before bed, you'll dream about liverwurst, and I spent a lot of my adolescence wondering if that was true.  And wondering what liverwurst tasted like.  My mom hates all things liver, so she never bought us liverwurst.  Well, I'm here to tell you that I really enjoy liverwurst sandwiches, especially if they have thinly sliced onions on them, but I've never actually dreamed about liverwurst after eating one.  Maybe I need to eat them closer to bedtime.

I once ran down my parents' driveway yelling, "I'm going on an adventure!" like Bilbo Baggins in The Hobbit: An Unexpected Journey (2012).  I was like 35 at the time.  My mom thought I'd gone mad.  Again.

I used to spend a lot of time trying to learn how to roll a coin between my fingers like Val Kilmer does as Doc Holliday in Tombstone (1993).  So much time.  Never did figure it out.  My brother did, though.  I think the trick might be to use a bigger coin than a quarter.

Anna & Irene at Horseback to Byzantium
Eva at Coffee, Classics, and Craziness
Grace and Katherine at Maidens of Green Gables
Kate Gabrielle at The Films in My Life