Finally, a very easy one to answer!

As I said here, my favorite actor is John Wayne and my favorite actress is Maureen O'Hara. While they made five films together, none of those are my favorites from them.  So today I get to talk about two movies in my favorite genre:  Westerns :-D

My favorite John Wayne movie is also my third-favorite movie of all time:  The Sons of Katie Elder (1965).  It tells the story of four brothers, John (John Wayne), Tom (Dean Martin), Matt (Earl Holliman), and Bud (Michael Anderson, Jr.) Elder, who come to town for their mother's funeral, only to discover that something is quite rotten in Sweetwater, Texas.  They work together to figure out just how their father lost the family ranch and their mother died in poverty, trying to make up for neglecting their parents for so many years.  While doing so, they run into a stellar bunch of character actors, everyone from Paul Fix to George Kennedy to Dennis Hopper. 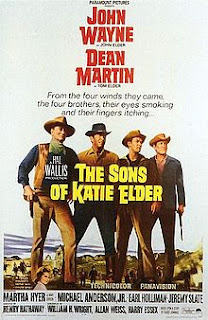 I had a small version of the poster for this movie hanging up in my living room in our last apartment, but I don't have room for all my pictures in this house, so I had to sacrifice it.  It wasn't a very good poster anyway -- it was a repro and looked like it was printed from somebody's home computer.  Instead, I bought a couple photos from this on Ebay and am in the process of finding a good frame for them to put above my fireplace.


Why do I love The Sons of Katie Elder above all other John Wayne movies?  I think it's the interplay between the brothers, the task of avenging their father's wrongful death, the idea of "we'll do what's right even if we're not the right people to do it."  And the score, by Elmer Bernstein, is fantastic.  You can hear part of the main theme here -- it never fails to bring a goofy grin to my face or brighten my day.

As for my favorite Maureen O'Hara movie, it's The Rare Breed (1966).  It follows British widow Martha (Maureen O'Hara) and her daughter Hilary (Juliet Mills) as they accompany their prize Hereford bull, Vindicator, to his new home in Texas.  They, in turn, are accompanied by Sam "Bulldog" Burnett (James Stewart), who may or may not be planning to actually deliver the bull to its new owner, Alexander Bowan (Brian Keith).  Along the way, they have a couple of nasty run-ins with Harry Carey Jr. and Jack Elam, and eventually join up with Bowan's son Jamie (Don Galloway).  Then winter comes, and Martha and Hilary are stuck at the Bowan ranch in Texas because of all the snow.  Hilary falls in love with Jamie, while both Alex Bowan and Sam Burnett try to win Martha's affections. 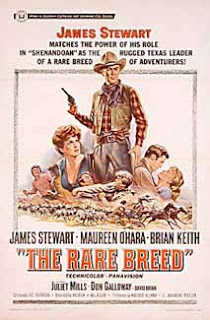 A vintage magazine ad for The Rare Breed got chosen as one of the things that would grace my limited wall space here, so you know I'm pretty fond of it.


My love for this movie is all about the cast and characters.  Seeing O'Hara, Stewart, and Keith interact is pure fun, and Mills and Galloway are both sweeties.  This is one of the first westerns I can remember watching, so it was pretty formative of my love for the genre.  The plot isn't stellar, the pacing might be a bit draggy, but I enjoy being along for the ride anyway.
Posted by Hamlette (Rachel) at 10:49 PM