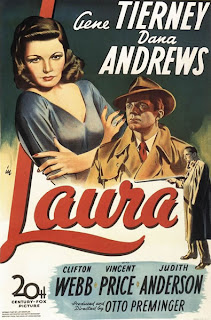 This is my favorite Dana Andrews movie.  But I haven't watched it for several years, and my husband had never really seen it, so we watched it together last night.

Homicide detective Mark McPherson (Dana Andrews) finds himself falling in love with Laura Hunt (Gene Tierney) while he investigates her murder.  And if that sounds a little creepy and disturbing, well, it isn't really.  Everyone from Laura's mentor (Clifton Webb), to her fiance (Vincent Price), to her maid (Dorothy Adams) describes Laura as being sweet, wonderful, kind, intelligent, charming, and beautiful.  The last is confirmed by Laura's portrait in her apartment, which McPherson gets a wee bit obsessed with.  But Andrews makes McPherson so sympathetic, so believable and upright and nice himself that you just feel really sorry for him because he can't ever meet this paragon of womanhood and have a chance of wooing her himself.

(One quick note, because I remember my s-i-l being confused by this the first time we watched this:  Dana Andrews is the guy and Gene Tierney is the girl.  Got it?)

Laura is often categorized as being film noir, but I don't really feel like it fits in that genre.  For one thing, Laura Hunt isn't really a femme fatale, luring men to their doom.  The visual style isn't quite off-kilter enough to make it noir either, though it does have some nice chiaroscuro lighting in a few shots.  It does have a murder and a detective, and I suppose you can say that McPherson is morally questionable since he falls in love with the memory of a dead woman.  But I think that, overall, Laura is just not pessimistic enough for me to feel like it's really noir.  It lacks the ambivalent or tragic ending.  I think if it had kept going the way it was, with Mark getting more and more obsessed with Laura, then it could have gotten really dark, and might have been a more fascinating movie.  But it doesn't, and know what?  I love it anyway.

Okay, so McPherson spends the first 40 minutes of the film interviewing Laura's mentor, fiance, and cousin.  He clearly suspects both the mentor and fiance of murdering Laura.  A lot of that time is spent in flashbacks while one person or another describes how they met Laura and how wonderful she was, why they couldn't possibly have killed her, etc.

One evening, McPherson goes to Laura's apartment.  He gets comfortable, clearly intending to spend a good bit of time investigating.  Or something.

This is my favorite scene in the whole movie.  Andrews is amazing here.  He wanders around, tapping a packet of letters against one hand, not saying a single word for minutes on end.  He peers into her closet, opens and closes doors, and tries to figure out just why he's there anyway.  Eventually, he pours himself a stiff drink.

Finally, he settles down in a chair and falls asleep.

I can't say any more here without totally spoiling things, and I really don't want to do that in case anyone reading this hasn't seen the movie and intends to.

The costumes in this are very nice, as you've seen above.  Nobody, but nobody wears a suit or a trench coat like Dana Andrews.  Or a fedora.

Look at that guy!  It's like they invented these clothes just for him.  Vincent doesn't look half bad here himself, but when he stands up, he looks like he bought his clothes at a second-hand store.  Dana looks like he was born in his.  Yum.

Okay, but enough about Dana.  Not that there could ever really be enough about him, but I do need to show you some of Laura's outfits.  Remember, we get to see a lot of her in all those flashbacks I mentioned earlier.  Here's my second-favorite of her dresses:

And I approve of this hat: 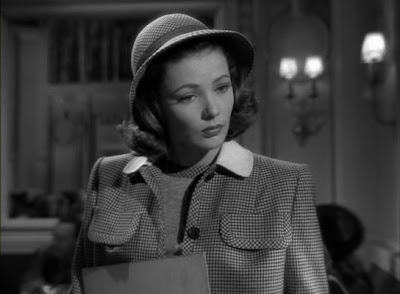 But this hat is dopey and makes her look like a wet bunny, IMHO: 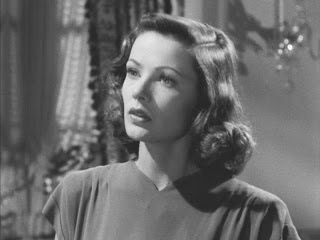 And finally, this is my favorite of her ensembles.  It's simple and soft and feminine, lacking those big shoulder pads and strict corsets you see in the '40s so much. 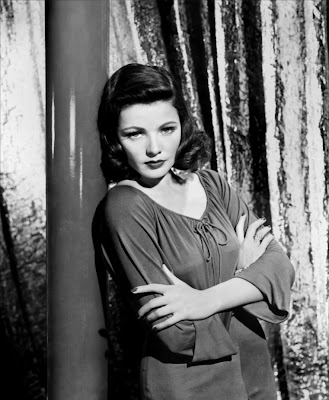 Finally, is this movie family-friendly?  Depends on the family.  We never see the corpse, but McPherson says she was shot in the face with a shotgun, which can conjure up a pretty icky image if you have a powerful imagination.  Also, the corpse was clad in a negligee, and it's implied that she had been engaging in illicit activities with a man prior to her death, but nothing is every directly said, so innocent young minds wouldn't suspect anything I don't think.  There is also one kiss, and there is another shooting at the end that is pretty suspenseful, but there's no blood shown.
Posted by Hamlette (Rachel) at 7:59 AM