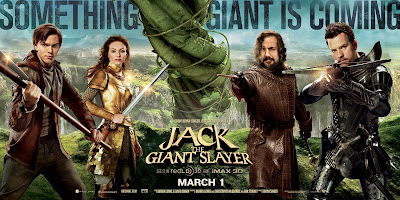 I went to see Jack the Giant Slayer over the weekend, on Deborah Koren's recommendation.  I'm so glad I went!  It's a joyous romp, just the sort of adventure I needed.

You know the basic story:  Jack (Nicholas Hoult) trades a horse for some magic beans that grow an enormous beanstalk that leads to... giants!  This version throws in a princess named Isabelle (Eleanor Tomlinson), a conniving courtier named Roderick (Stanley Tucci), and the leader of the royal guard or something, Elmont (ever-effervescent Ewan McGregor).  And there's not just one giant, there's a whole world of giants up in the clouds, just waiting to eat humans and take over the earth and generally behave like enormous fourteen-year-old boys.

Princess Isabelle winds up in the giant world accidentally, so Roderick, Elmont, and Jack (and a few other guys) climb up the beanstalk to rescue her.  All manner of mayhem ensues.  Great fun!  Some of it does pander to the tweenage boy element, though (a couple of the giants are clearly related to the troll king from The Hobbit).

Jack was sweet and Isabelle was spunky, but it was Elmont that I rooted for through the whole movie.  First of all, there's something so irrepressible, so buoyant about Ewan McGregor that I have loved him from the first movie I saw him in (which was probably Emma).  Actually, no, my fascination with him dates back farther than that -- I read a review of Trainspotting (1996) in my dad's Time or Newsweek when it came out, and there was this picture of him drinking out of a bottle and laughing, and this one of him lying across a railroad track with his head on one track and his feet on the other, and I went, "Who IS this guy?  He looks so happy, and then he's got his head on a train track?  What?"  I didn't see Emma until it came to video, so probably a year or so later.  (Never have seen Trainspotting, and don't intend to.)

Anyway!  Elmont!  He spends the majority of the movie behaving as if he's actually the hero of the whole story.  Since he's head of the royal guard or something, he's in charge of the rescue mission, and goes about giving orders and engaging in manly acts of derring-do with a hilarious mixture of swagger and aplomb.

But once more, insane hair for Ewan McGregor!  And a silly mustache with cute little twists on the ends.  He pulls the look off, just like he did the Padawan braid-and-buzz for A Phantom Menace and the pink cotton candy for Emma.  But it's very silly and made me giggle.  Especially since he very clearly doesn't care that it's silly.  I think it's supposed to be a really bad case of helmet hair, as he does get it all smooth and under control once in a while.

Random things I loved about this movie:
I really can't wait for my kids to be old enough to see this, as I think it will become a family favorite.

I say that this counts as a period drama because at the end, they posit that it was occurring in an early England.  Also, the costumes were very fun.  Obviously, this is a fantasy, so you get some unreal things like golden armor for the royalty.  And Elmont's armor is very natty, don't you think?  But commoners like Jack have grubby, work-ready clothes in plain colors that I found very effective.

Is this movie family-friendly?  Fairly.  There are a handful of bad words.  Several people get their heads literally bitten off, though that's usually at a distance.  There's very little blood or gore, though there's a lot of fantasy-style violence.  And, like I mentioned, some juvenile humor involving nasal mucous and such.  There are a couple of pretty chaste kisses too.
Posted by Hamlette (Rachel) at 12:28 PM