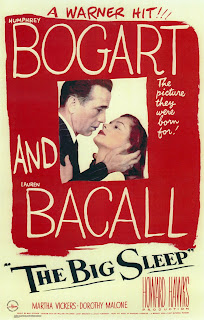 What do you get when you take a novel written by Raymond Chandler, get William Faulkner and Leigh Brackett to cowrite the screenplay, tap Howard Hawks to direct it, then cast top-of-his-game Humphrey Bogart as the lead, with brand-new starlet Lauren Bacall as the love interest?

You get magic, that's what you get.  Hard-boiled, wise-cracking magic.

Philip Marlowe (Humphrey Bogart) gets hired by a frail millionaire (Charles Waldron) to stop someone from blackmailing him.  Supposedly, he's being blackmailed because his younger daughter Carmen (Martha Vickers) has racked up some gambling debts.  Supposedly, all he wants is for Marlowe to stop the blackmail.

Supposedly, this will be neat and easy.

But folks, this is film noir at its finest.  And we all know that there ain't nothing neat and easy about life inside a noir movie.  Nothing whatsoever.

The blackmailer turns out to run a lending-library of dirty books.  (This is only marginally referenced, and Marlowe in the movie never sees any of the books.)  The blackmailer gets shot.  Someone else gets their car pushed off a pier with them still in it.  Someone else gets shot.  People get beaten up, slapped, shot at, killed, and we find out that one character at the center of the plot has been dead all along, since before Marlowe ever got called in to not-find them. 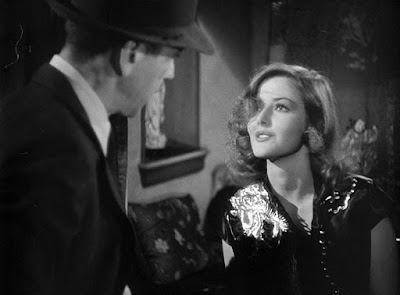 It's twisted and twisty.  It's also beautiful, brilliant, and brutal.  I love it.  It ought to be a lot higher on my favorites list than it is.  Maybe I'll bump it up a notch or twenty. 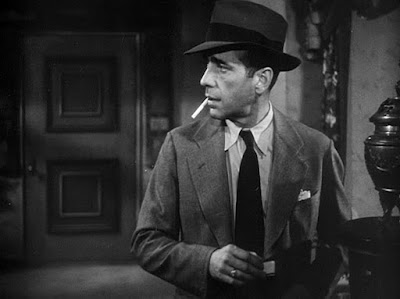 At the center of all the mayhem stands Philip Marlowe, a knight in grimy armor who follows his own code of morality and justice.  Defiant, wise, hopeful, fatalistic Philip Marlowe, the finest hardboiled detective to ever trade witty retorts for bullets.  Bogart brings him to life beautifully, though he's a little different than the Marlowe in the books.  A little softer, and yet a little less emotional, somehow.  But anyway, Bogart puts in a strong performance.  It's no wonder his co-star married him. 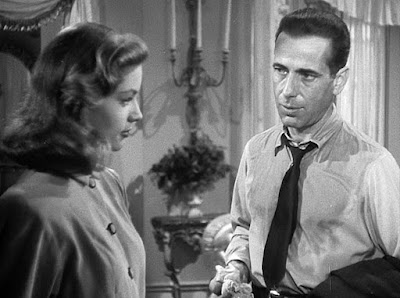 In my review for To Have and Have Not (1944), I talked about how great the chemistry was between Bogart and Bacall, who had just met on that film's set and were falling in love.  Their chemistry sizzles here as well, though it didn't originally have quite so much room to sizzle.  There are actually two different versions of this movie!  The original had a lot less of Bacall's character, Vivian.  I haven't watched the original yet, though it's included on my DVD (it was shown to test audiences, then changed to the final form before release) just because I love the scenes between Marlowe and Vivian, but I imagine it follows the book more faithfully, in which Marlowe does not fall for Vivian at all. 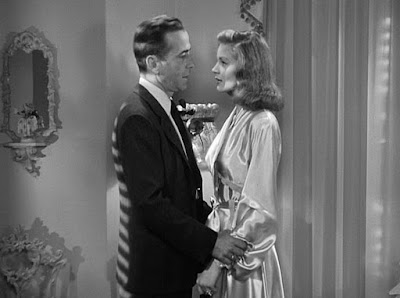 Anyway, To Have and Have Not was a huge hit, and audiences wanted more of Bogart and Bacall together, so they actually went back and filmed some new scenes with the two of them, which then got spliced into the movie, replacing a few other scenes.  The couple got married in between the main filming and the pick-ups, but their onscreen sparkage didn't suffer any the way it often does when costars get married.  They're flirty and fantastic and fun. 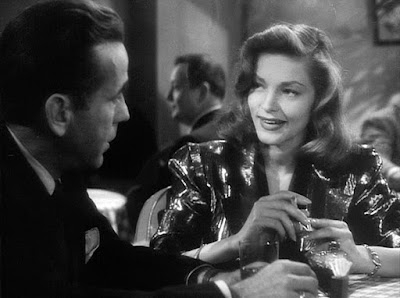 One of the best things about this movie is the dialog.  A lot of it comes directly from the book, and all of it is very, very snappy.  Wisecracks, witty comebacks, double-entendres, and quips riddle the script, and Hawks continues his habit of letting (encouraging?) his stars step on each others' lines to keep the fast-paced dialog zinging along.  It's quite brilliant, and quite funny.  I watched it with Cowboy the other night, and he laughed aloud several times, which is quite something for a serious noir film.  (I laughed too, don't get me wrong -- but I've seen it many times, so I knew when the funny bits were coming.  He didn't.) 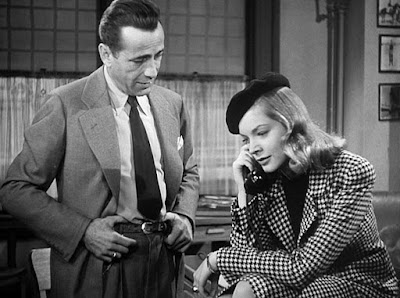 Is this movie family friendly?  There's violence, including shooting and brawling.  There's stuff about gambling, people in peril, lots of smoking, some drinking, poison and blackmail, the implication that one character was drugged, and the implication that one character had pictures taken of her with no clothes on.  No cussing, no bedroom scenes.  A few smooches.  It's probably fine for teens, but not younger viewers, and kids wouldn't necessarily appreciate its finer points, anyway. 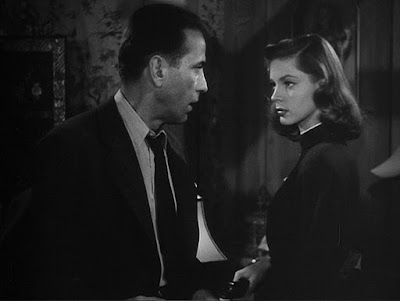