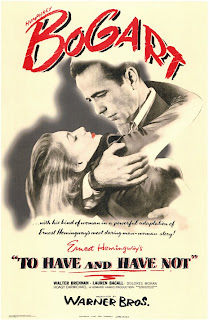 (Spoiler warning -- I do discuss some plot details here, but I do NOT give away the ending.)

Although released in 1944, To Have and Have Not is set in 1940, shortly after France fell to the Nazis. It takes place on Martinique, a French island in the Caribbean.  Harry Morgan (Humphrey Bogart) owns a fishing boat, and some Free French patriots want to rent his boat to smuggle a freedom fighter onto the island.  At first, Harry says no -- he's an American and wants to stay neutral because he needs the local Vichy-controlled government's permission to do business.

But then, the Gestapo haul Harry and newcomer "Slim" (Lauren Bacall) in for questioning, which makes Harry mad, so he decides to do the people-smuggling job after all.  He says he's doing it for the money, but he clearly has anti-German (or just anti-bully) sentiments.  Plus, he wants to use part of the money to get Slim a plane ticket home.

But by now, Slim is obviously in love with Harry, and she decides to stay in Martinique to be near him.  She gets a job singing in the cafe where Harry lives, thanks to the cafe's piano player, Cricket (Hoagy Carmichael).  As Harry gets more and more embroiled in the resistance movement, so does she, and so does Harry's "rummy" friend, Eddie (Walter Brennan).


The film bears precious little resemblance to Ernest Hemingway's novel by the same name, other than that they both have a central character named Harry Morgan who owns a fishing boat.  But I'm okay with that, because you can imagine this is a prequel to the book if you want.  Or just consider them as two separate entities, which is what I do.

I kind of feel like, after the success of Casablanca in 1942, the studio wanted another anti-Nazi movie about a reluctant hero and an unlikely romance for Humphrey Bogart to star in, and this is what they came up with.  Like Rick Blaine, Bogie's character in Casablanca, Harry Morgan pretends to be selfish and materialistic, only interested in making money, not in doing what's right or what's patriotic.  But while Rick had people pretty convinced he would stick his neck out for nobody, everyone knows Harry is a softie who "carries" drunk Eddie on his ship so Eddie will have some sort of job, who buys plane tickets for stray girls to go home, who will probably be willing to rent his boat to desperate resistance fighters.  Accordingly, while I like Rick Blaine okay, I absolutely love Harry Morgan.


This is Lauren Bacall's first film, though she'd done some acting on stage in New York.  Just in case you didn't know this already, this film was where she and Bogart met and fell in love.  The chemistry between the two of them is legendary, the stuff dreams actually are made of.  Watching them here, you can almost feel the attraction pulling them together.  I've never seen Bogie look and behave sexier than he does here -- his weather-beaten face takes on a roguish charm, his eyes glow with hope and wonder and desire.


Part of why I love this movie is the great use it makes of its supporting cast.  Hoagy Carmichael's Cricket is sympathetic and friendly, but with an air of reserve that makes me want to sit down beside him and ask him for his life's story.  Walter Brennan's Eddie is sweet, pathetic, and seemingly harmless, but he's got more gumption than he lets on.  Then there's Marcel Dalio's Frenchy, who owns the hotel/bar where much of the film is set, and who gets Harry involved with the freedom fighters.  He's nervous and sad-eyed and earnest, but also very good at persuading people to help him while looking harmless and helpless.  All three characters could have been caricatures or just warm-blooded scenery, but instead are vital, fully-realized, and intriguing.


I first saw this when I was in high school, so probably about 15 years ago.  I recall also watching it in college, once with my dear friend ED, and once with my then-boyfriend, now-husband Cowboy.  And I know I watched it when we lived in WI.  So this was my fifth viewing, and the first in at least 5 years.  Each time I see it, I find new layers, new nuances I'd never noticed or considered before.  For example, when I first watched it in high school, I didn't pick up on most of the innuendo in the scenes between Bogart and Bacall.  It wasn't until this viewing that I noticed the similarities between Harry and Casablanca's Rick.  I could go on, but this review is long enough as it is.

Because this is my first entry into the Period Drama Challenge, I will take a moment to remark on the costumes and general period-ness of this film.  Because it's both set and filmed in the 1940s, I kind of assume the costumes are pretty accurate for the era.  I absolutely love Bacall's checkered suit.


She pulls off the slinky, midriff-baring dress for her debut as a lounge singer too, though I don't like it quite as well.


But my favorite of her costumes is her striped bathrobe, simple and homey, looking kind of worn and well-traveled, like it's something that reminds her of the home she ran away from, ugly but beloved.


Bogart spends most of the movie in some variation of the same outfit, a white button-down shirt with the cuffs rolled deliciously to the elbow, a black kerchief rolled and tied around his neck, a jaunty captain's hat, and either denim-looking pants with enormous back pockets or else off-white trousers.

I don't know much about Martinique during WWII, so I don't know how historically accurate this movie is, but of course, the Vichy government and the Free French were definitely real.

I absolutely recommend this film!  It does contain a lot of cigarette smoking, alcohol drinking, and some violence, though it's mostly implied violence, not at all gory or bloody.  And there's a lot of flirty, innuendo-laden dialog, which progresses to a bit of kissing, nothing more.  Oh, no bad language either!  It probably moves too slowly for a lot of younger viewers, but otherwise is pretty appropriate for all audiences.
Posted by Hamlette (Rachel) at 6:56 PM