I love musicals, though I'm partial to the kind where the songs advance the plot, not where people just sing for a while because they can.  In fact, you won't find a single "we're putting on a show!" musical on this list (Though Singin' in the Rain does have a few numbers like that, which are not my favorites).  I discovered, while making this, that I really love musicals from the '50s -- six of these are from that decade, and three are from a single year!  There are also three starring the same person:  Gene Kelly.  He's absolutely my favorite dancer.  Ever.  The end. 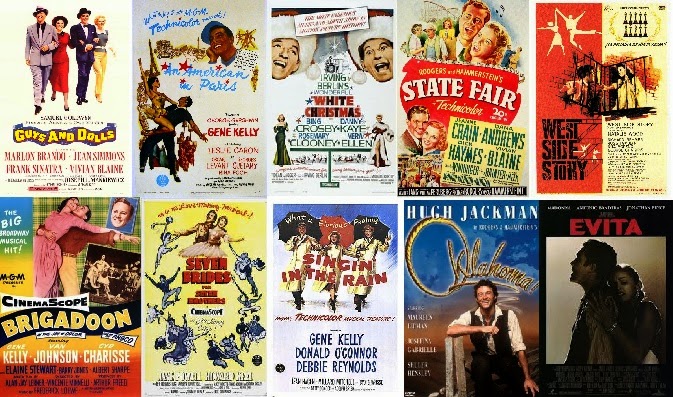 Nathan Detroit (Frank Sinatra) bets Sky Masterson (Marlon Brando) that he can't get social reformer Sarah Brown (Jean Simmons) to go on a date with him.  This movie made me fall in love with the stories and writing style of Damon Runyon, which the musical is based on.  Personally (and that means in person), I adore the odd patter the characters speak.

An ex-GI painter (Gene Kelly) falls in love with a girl (Leslie Caron), not knowing she's engaged to his night club singer friend (Georges Guetary).  The whole movie is an excuse to sing and dance to Gershwin tunes, which is one of the best reasons for making a musical I've ever heard.

A team of showbiz stars (Bing Crosby and Danny Kaye) try to rescue a retired general (Dean Jagger) from bankruptcy by staging a show at his ski lodge.  Why yes, this heads up my list of favorite Christmas movies too.

A family spends a week at the Iowa state fair, where the daughter (Jeanne Crain) falls in love with a newspaper man (Dana Andrews), the son falls in love with an entertainer, and the parents take home prizes for their mincemeat and hog.  There's a 1960s remake that stars Bobby Darin in the Dana Andrews role, but aside from dearest Bobby, that version lacks the charm of this one.

A modern retelling of Romeo and Juliet set in 1960s NYC, with rival street gangs taking the place of rival families.  So heartbreaking and beautiful, with some of the coolest dancing ever -- I much prefer it to Romeo and Juliet.  The soundtrack was one of the first CDs I ever bought, and I know all the words to every song.

Two hunters (Gene Kelly and Van Johnson) stumble on an enchanted Scottish village that only exists one day out of every hundred years.  I'm getting goosebumps just thinking about it.  This is another soundtrack I love to bits and know every song on.

A man (Howard Keel) comes down out of the mountains to find a bride (Jane Powell), but doesn't tell her he has six brothers back home, and she throws a snit fit when she finds out and won't let any of them live in the house for a while.  Funnier than it sounds.  Also has gobs and gobs of awesome dancing.

While the movie business scrambles to convert from silents to talkies, an actor (Gene Kelly) falls in love with a straight-talking girl (Debbie Reynolds), but his onscreen romantic partner (Jean Hagen) schemes to keep them apart. There is a reason this is so famous:  it's amazing.

A cowboy (Hugh Jackman) tries to win the heart of a girl who claims she hates him.  Yes, you read that correctly:  Hugh Jackman.  This is the London stage version, not the famous Hollywood one, and I prefer it because, well, Hugh Jackman.  Totally available on DVD, and the soundtrack is out on CD.

The fictionalized story of how Eva Peron (Madonna) married dictator-to-be Juan Peron (Jonathon Pryce) and helped him take over Argentina, as told by the coolest narrator ever (Antonio Banderas).  Another one with a soundtrack I know forward and backward.

How about you?  Are any of your favorites on this list?  What musicals do you love that I don't have listed here?  Maybe you can introduce me to some I haven't seen yet!
Posted by Hamlette (Rachel) at 1:12 PM