My Ten Favorite New-to-Me Movies of 2015

I had a lot of fun putting together a list like this last year, so I decided to do it again.  And I discovered something severely weird:  nearly half of these were released this year.  Craziness!  It was a really good year for movies I would love, I guess.  And another oddity:  only one of these was made before the year 2000.  It's not like I didn't watch lots of old movies this year, because I always do, but most of them were either things I'd seen before, or things I didn't love.  As usual, I've linked to any reviews I posted. 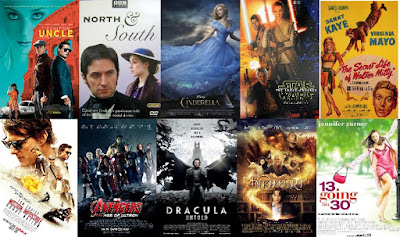 An American (Henry Cavill), a Russian (Armie Hammer), and a German (Alicia Vikander) team up during the Cold War to stop neo-Nazis from creating a nuclear bomb.  This is an unabashedly fun movie, and I love it ever so dearly.

A woman (Daniela Denby-Ashe) from the pastoral south of England moves to the industrial north and spends months ignoring the fact that a wealthy manufacturer (Richard Armitage) is in love with her.  Yes, it's technically a mini-series and not a movie, but that does not matter.  I MUST include it here.

Ella (Lily James) treats her stepmother (Cate Blanchett), a prince (Richard Madden), and her fairy godmother (Helena Bonham Carter) with courage and kindness.  It's a fabulously faithful retelling of the classic fairy tale, and it delights me.  (Yes, my new header is in honor of the Cinderella blog party/blogathon I'll be involved in next week!)

A bunch of new characters join forces with a bunch of old characters and try to defeat some bad characters.  Seriously, I'm sooooo spoiler-shy that I don't want to say more than that.  I hope to see this again this weekend, and then I'll post a real review.  But for now, just know it's in my top 5 on this list!

A meek magazine editor (Danny Kaye) spends his life getting trampled on by everyone around him while he daydreams about being a hero, until the girl of his dreams (Virginia Mayo) shows up and involves him in a dangerous spy mission.  I just watched this for the first time last night, and it zipped right onto this list!

The Avengers create an evil robot and then have to stop it from destroying the earth.  No, I didn't love it like I loved The Avengers (2012), but it's still a fun ride.

Vlad (Luke Evans) becomes a vampire temporarily to save his family and his kingdom from certain destruction.  This is the only Dracula movie I have ever loved, and yes, I have seen quite a few of them.  It has such a great twist on the character and the curse, and I wish I'd seen it in the theater.

A young girl (Eliza Bennett) learns that her dad (Brendan Fraser) can bring characters from books into the real world, and this causes all sorts of problems and mayhem and excitement.  I like this So Much Bettter Than The Book!!!

A teenage girl wishes she was 30 instead of 13, her wish gets granted, and she discovers that being an adult is actually harder and more confusing than being a teen.  Jennifer Garner and Mark Ruffalo Could Not Be More Lovable If They Tried.