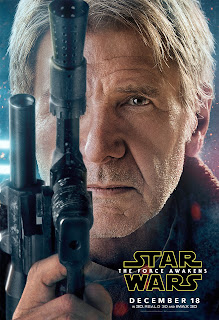 From here on out, there will be spoilage.

I went to see it again today, and I want to write a really excellent review of it.  Except I'm really tired, and I think I'm coming down with a cold.  So this is instead going to be a enthusiastic-but-rambly post about all sorts of different thoughts I've been chasing around in my brain all afternoon.  I apologize for any incoherence or maudlinity. 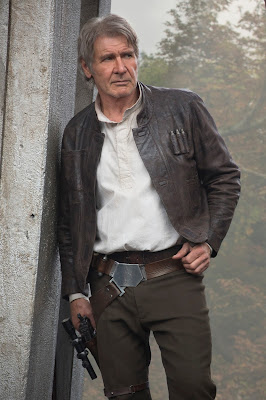 As you may have guessed from my choice of movie posters to head up this review, I love Han Solo (Harrison Ford).  He's been my favorite Star Wars character since my first viewing of A New Hope about twenty years ago, when I was fifteen or sixteen.  Never before or since has an avowed scoundrel swaggered his way into my heart with such insouciant ease.  When I found out Han was back for this movie, I was both overjoyed and worried.  Because this is a character I love, and what if they somehow wrote him all wrong?  Or gave him a tiny, throw-away part?  There were a million ways this could have gone wrong, and I imagined many of them.

Happily, none of those million ways happened.  Han Solo is not only exactly as he should be, he's the heart of this film.  Yes, he doesn't show up until it's well underway and we're growing attached to the new characters.  But once he and Chewbacca (Peter Mayhew) arrive, the film stops having a slight "oh-please-oh-please-oh-please like us" vibe and settles into a "yeah, we've got this" rhythm.  He grounds it, just like he did the first movie -- if Han Solo tells you that the hokey religions and ancient weapons are legit, you believe him.  If Han Solo is willing to put his life on the line to give a bad guy the chance to turn from the Dark Side, you know that bad guy is worth trying to save.

Which, of course, brings us to Kylo Ren (Adam Driver), a character so well-written and well-portrayed that I hate him with the fire of a thousand sun-sucking starkiller bases.  Ugh, I want to punch him right in his puffy, pouty mouth.  And not just because he killed my dearly beloved Han Solo, though that's definitely part of it, but because he has clearly put his parents through every form of mental and emotional anguish parents can go through, and he just... demands evisceration.  Except, of course, that Han Solo wanted him saved, not eviscerated, so I'm going to have to settle for imagining myself punching him, not drawing and quartering him.

(I do think it's cool that his command shuttle looks like a giant bat, though.  Very evil.)

Anyway, I'm tired of talking about someone I loathe.  Time to talk about my favorite new character!  Which, obviously, is Rey (Daisy Ridley). 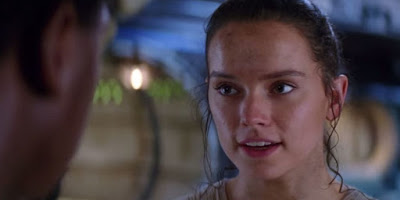 Rey is one of those characters I would enjoy being.  She's smart, fast, good at anything she does, snarky, and somehow still kind of naive.  She has a childlike wonder still, which I dig so very much.  I'd love to ride a saucer down that giant dune, pilot the falcon, hang out with Han and Chewie.  I'd like to be agile and unafraid of clambering around in dangerous places, strong with the Force, able to hold my own against multiple assailants.  And I'd definitely love to be able to talk Daniel Craig into doing whatever I told him to. 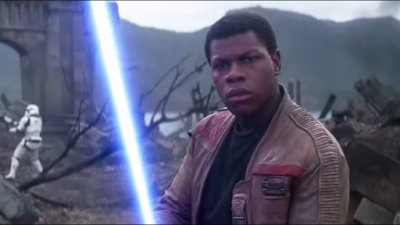 Then there's Finn (John Boyega).  I really like Finn.  He's scared, but determined.  He's kind and helpful, protective, gentlemanly, honorable -- the things I strive to be.  He also gets a little careless with the truth and tries to run away from his problems, but that really makes him a more interesting character than the practically flawless Rey and Poe.  My only quibble with this movie is that they never give Finn a minute to process the fact that he goes from being a Storm Trooper to slaughtering Storm Troopers in just a few hours -- I think he should have had a little more of a reaction to that fact, even if it was just like Rey's pause-and-realize-I-took-a-life thing.  Maybe he'll get lots of guilt and anguish in the next movie. 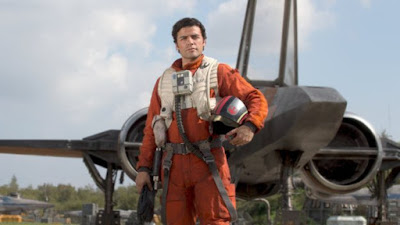 And I can't forget Poe Dameron (Oscar Isaac).  He basically ties with Finn for my second-favorite-new-character.  (WHY is there a terrible dearth of good pictures of Poe on the internet right now???)  He's sassy and brave and excellent at what he does.  Not to mention enthusiastic and funny.  I can't wait to see more of him in the next movie.

Annnnnnnd I'm running out of steam.  It's ten o'clock and I meant to be in bed twenty minutes ago, but I got caught up in my Star Wars joy.  Oops.  Okay, so besides all that, I absolutely love Chewie and how heroic a role he gets here.  (Though why didn't he just keep shooting Kylo Ren on that bridge?  He hit him once, after all.)  Princess Leia (Carrie Fisher) made good use of her screen time.  I got a huge kick out of seeing Ken Leung pop up as Admiral Statura -- I spent his scenes wondering if Josh Holloway was going to appear next, since I loved their buddy moments on Lost.  And is it just me, or is Luke Skywalker (Mark Hamill) a handsome old dude now?

I mean, he's no Han Solo, but he seems to be taking good care of himself out on that island.

So.  Now you know a bunch of stuff I've been thinking about regarding this movie.  And it's long past time for me to go to bed.  Here's hoping I can sleep off this cold and will be fine tomorrow.  Until then, may the Force be with you ;-)
Posted by Hamlette (Rachel) at 10:09 PM